disclaimer: I don’t know what you’re talking about really

Yeah - that’s in line with the “divine game” that benjito suggested.

(The point not being that the board should be taken as a whole, but rather that the whole game can be seen the whole time, in the Divine Game)

Nope… Maybe I should.

Let’s see if I can find the manga in Japanese, would be good language practice

Yep, I know.
We were never so close though, because computing possibilities is way, way, way out of our capabilities.

It would be interesting to see if you can watch it (the anime) and I guess the same for the live action, but this belongs in “the other” thread…

Adding: Sai can’t reach the Divine Move without playing. He was legendary before, and when he played more, incorporating what people had discovered in between, he became even more legendary.
AI multiplies the effect, but the point is always that the Move will be revealed by playing.
Giants on the shoulders of giants etc.

As an old player not used of mangas, I encourage both of you to watch it. You may book a full weekend with stock of eating/drinking, even invite others to join.

I believe phrases like “Divine Move” or “Hand of God” were used before Hikaru no Go, and are well-known as a concept other than just a reference to the series.

I think it’s a highly subjective thing and doesn’t necessary mean just a single move either, but rather an entirely brilliantly played game against a very strong opponent that challenges one to rise to greatness. I think when Sai expresses his ambition to play the “divine move” or achieve the “hand of God”, what he is essentially saying is that he is still hoping to play his ultimate masterpiece game, one where he demonstrates nothing short of an overwhelming strength that could only be compared to God. His unfinished business is to perform such an unparalleled magnum opus.

In recent times, another example where the phrase was used was during the Lee Sedol vs AlphaGo match. In particular, Gu Li, while providing the official Chinese commentary, exclaimed “the hand of God” when Lee Sedol played move 78 of game 4.

EDIT: here’s a video of Gu Li and other commentators making the exclamation 神之一手 on seeing move 78. 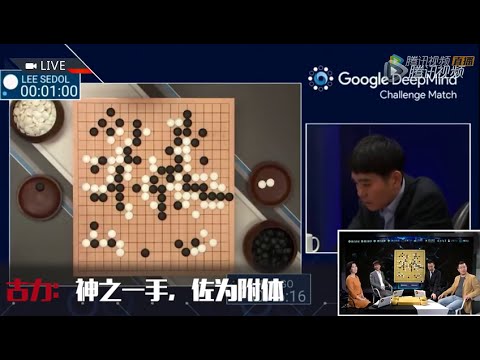 We discussed this particular move in another thread, starting here:

Go Pro Yeonwoo also made a video about it: 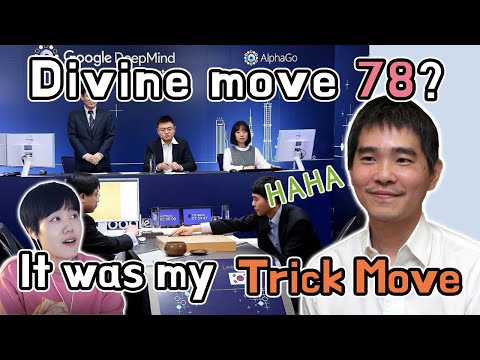 I always interpreted the term (神の一手, kami no itte) as »perfect play«.

I think it makes little sense with regard to a single move. Who hasn’t made a move that all commenters, AI and human alike, would regard as »the only move« or »AI choice«?

It may start to make sense to describe a longer sequence of plays that have a significant impact on the outcome of a game. I guess that most people would agree that a complete game played without objective mistake would somehow manifest »the hand of god«.

However, and this is also alluded to in Hikaru no Go, playing such a perfect game requires an opponent of equal strength.

Finally, I’d guess that nobody would expect from humans to remain perfect ever after.

Interesting that kami no itte can be translated just as happily as move of the gods, considering the ambiguous pluralisation.

No-one says that only one kami is referred to, right? And as there are so many kami, it’s perhaps better called a move of a god rather than move of god?

I think the most faithful translation of kami no itte is just kami move, keeping the specifics obscure.

Who hasn’t made a move that all commenters, AI and human alike, would regard as »the only move« or »AI choice«?

I think the key to a “divine move” is that most people (other pros, commentators, etc.) don’t see it as a viable move until it is played.

Once it is played, it becomes clear that it is a great move.

Note also that kami aren’t considered to be perfect AFAIK, unlike the gods of many modern religions.

So there’s no reason that a kami move need be perfect either.

For instance, are the three moves supposedly shown to Jowa by “ghosts” in the Blood-Vomiting Game to be considered kami no itte? Even if they’re imperfect?

I think the key to a “divine move” is that most people (other pros, commentators, etc.) don’t see it as a viable move until it is played.

Once it is played, it becomes clear that it is a great move.

I would call that a myoushu (妙手), a »brilliant move«, maybe even »miracle move«. In itself, I don’t think that this could be the narrative focus of a whole manga series, or the highest goal a go player could want to achieve.

I like to think the divine move isn’t just a move but more so that its something every go player does when they are play the game. Every time they think about the game and show how much they love and care about the game it is a divine move!

Or maybe… the divine move was the friends we made along the way?

So does that mean that Yeonwoo’s motivation is Kame no Itte?

This is just my personal way of thinking about it;

Imagine what the spectrum of all possible strategies of Go might look like. (In theory, some multi-dimensional space, but finite dimensional when we restrict to boards of bounded size)

On one end of the spectrum, there is the “random strategy”, which picks random legal moves (equidistributed). When we start playing Go, we start somewhere “near” this point. Of course we don’t play random moves, but we don’t have a grasp of what moves are good yet either.

As we progress our journey and communicate with other people, we may observe that there are increasingly many positions where we agree on what move to play. Intuitively it seems that our strategies are approaching each other. So do these paths converge? Is there a single strategy that we are heading towards? And that is the concept of “divine move” for me.

As a contrast here are some rigorous theoretical points. Under the right ruleset the tree of all game variations is finite, and thus it is possible to calculate which moves lead to an optimal result, although this is not practical of course.

In such a computation we would assume optimal play from our opponent. This means however that in positions where we are behind, i.e. every move fails to win, then every move would be considered optimal. So I believe that further differentiation between moves would be good to define “optimal strategies”, but I don’t know of a rigorous concept right now.

See also: Divine move in everyone for my take on it and some ideas from others.

Are there any rulesets where the game tree is not finite??