The history and evolution of kyu rank in Go game

Even over the course of the modern era (within the last 100-150 years or so), it could be possible that the concept of a one dan amateur, even within a go association, has shifted. I’ve heard anecdotally (and I don’t recall exactly from where, but maybe it was on some online discussions) that some allege that the concept of amateur shodan has been gradually inflated over time (allowing more amateurs to become certified as shodan), since collecting revenue via the associated fees of official certification by a go association creates an incentive for the go association to let their rating system become more inflated over time.

I don’t know many sources that state handicaps between pros and low dan amateurs from long ago. In recent decades, I think pros usually give 1d EGF about 6 stones handicap (a bit less if it’s a simultaneous game or a teaching game and maybe a bit more for really strong pros).
And there is an anecdote in 7p Kageyama’s Lessons in the Fundamentals of Go where he talks about giving 6 stones to a Japanese 1k student (about 50 years ago?). That might be a teaching game handicap, because he describes a game where he wins with 9 handicap when challenged to do so. But at least that handicap seems fairly close to wat an EGF 1k might need today against a 7p (7-8 stones?).

Since that Kageyama anecdote, Japanese amateur ranks seem to have inflated. In recent decades, there is about a 3 stone gap between EGF ranks and Japanese ranks. So I think a strong pro can easily give 9 stones handicap to a Japanese 1k today.

Selling dan diplomas could play a role in that Japanese rank inflation, but that practice differs accross regions. For example, the EGF and AGA don’t sell dan ranks. Western dan ranks are free. You only have to prove your rank in competition. It seems there has even been a gradual deflation in EGF dan ranks over the last 50 years (elitism could play a role here?).

I suppose this is what I had in mind - I rationalised that the upper ranks are getting “stronger” but the number assigned to them is the same. Therefore they are pushing everyone down - i.e if you were 1d some years ago you might be 2k now if you played the same kind of game at the same “level”/“strength” because everyone else has “improved”.

@claire_yang I don’t know if anyone’s said this yet, but if you wrote a book, I would buy it.

Your posts to this forum are ridiculously high quality!

I suppose this is what I had in mind - I rationalised that the upper ranks are getting “stronger” but the number assigned to them is the same. Therefore they are pushing everyone down - i.e if you were 1d some years ago you might be 2k now if you played the same kind of game at the same “level”/“strength” because everyone else has “improved”.

It’s hard to say for sure, but I think the deflation of EGF ranks is not that large. In the lower dan region, I think the EGF rank deflation is not more than about 0.5 rank per 10 years or about 2 ranks in 40 years. Some of that deflation will be corrected in the coming update of the EGF rating system.

I looked up some old handicap game results between European amateurs and Japanese professionals.

Even though those are very few data points, those old results are surprisingly consistent with what I would expect nowadays. Modern 6d EGF and 2d EGF may perform slightly better in a similar match, but I think the difference is not more than 1 stone.

Thanks for everyone’s discussions and enthusiasm about this subject. And although I have been preoccupied with the ongoing Nongshin cup this week (and Ichiriki played today), I would still like to share one more document I dug up during the weekend, that is pretty important and I feel would help with the discussion about the strength of players at this time period

These are the official records for all the players in the 4 great Go houses in 1880 (明治13年), right after the announcement of Hoensha, but before they are in serious business yet, and probably the last document to list Go players in their original dan ranking categorized by their own houses.

image1396×364 306 KB
Notice that this is published by the house of Inoue (井上家), and the top players in the Honinbo House at 7d 邑瀨秀甫 and 6d 中川亀三郎 were the 2k and 3k players in the newly established Hoensha. Embarrsingly the head of the Honnibo house Honinbo Shugen (本因坊秀元) was only 3d at the time, and was considered one of the reason why Honinbo house declined and Hoensha splitted out along with many strong players in other 3 great houses.

What interests me the most is the mapping of these players’ old ranks and their overlapping with the latter 1883, 1884, and 1891 member list ranking in Hoensha kyu ranks. And not just the stronger players, but the weaker players as well. Some of the Shodan (1d) players on this list were still 9k on the Hoesha member list for years. I feel they would be good anchors to know the strength for players in the 1880s.

And fortunately, Hoensha’s newspapers/magazines would print some of their monthly in-house matches, and there are collections of these old records called 囲棋新報合本 (the Go newspapers of the new era collections total three volumes). And now I am scouring through all these games (about 200 to 250 games in each volume) to find games played by these anchor 8k or 9k players. And everyone could judge on their own how they fair in modern standard. 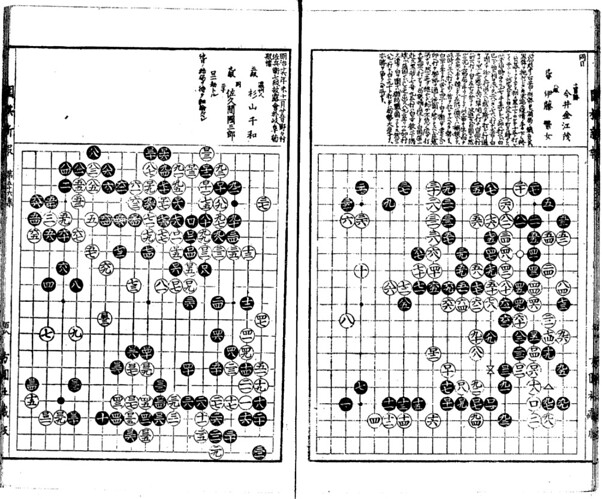 image1004×833 270 KB
I’ll keep looking and transcribing more games between similar ranking games between 8k and 9k players. But from all the stronger players’ games I already looked up, I can say besides the old school fuseki, those around 4k to 5k surely have reading and close fighting skills as good as modern average pro players, and some have very good end games and impressive ko fights. And those games usually have annotations and self-reports about errors they thought they made in the games. So they were definitely learning and have similar capabilities to spot bad moves as we do.
11 Likes
shinuito February 24, 2021, 8:09pm #29

It was already finished, so maybe not so spoilery anymore? I might need to redact that.

I’ve also transcribed another record on the other side of the page between 伊藤繁女(listed as 8k in the description of this game) and 今井金江茂 (on the member list in 1883 is 7k). But there is little to no record of who 伊藤繁女 was and from the naming convention, she was a woman player and listed in the 1880 old listing as 2d.

今井金江茂 played dozens of games through the Hoensha era, but little is known about him, only that he used to be called 今井金蔵, and was listed as a shodan in the Honinbo house record of 1880. But rose through the rank in the 1880s to 7k, 6k, 5k, and then evetually 5d (when the dan ranking was reverted), and was listed as one of the earlier founding members of the Hoensha. This usually means he had the financial/political influence for the establishment of the Hoensha. Since I know too little about them, hard to place them among the ranks. But from this game, and other games 今井金江茂 had played, he was a pretty strong player.

It was already finished, so maybe not so spoilery anymore? I might need to redact that.

It kind of depends, I was still hoping to watch it. Michael Redmond was streaming it while I was asleep

Anyway back on topic, this is some really interesting stuff, with the game records too!

Wow @claire_yang - how do you even find / access all these historic Go records? Amazing research. Are you doing a PhD in Go history? Maybe you should!

Mostly through the digital collections from the Japanese National Parliament Library (国立国会図書館), some from old book collections auctions where they would show inside pages as proof of content.

Because most of the parliament members are fat cats? 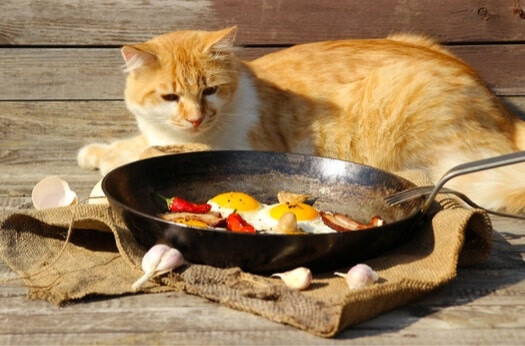 After more than a week of looking through more than a thousand Hoensha games in the newspaper/magazine collections, I’ve found this player 木原亀太郎 Kihara (or Kiwara) Kametaro who was a Shodan on the 1880 Honinbo House registry and 8k (2d) on the 1891 Hoensha member list, that I think is a good representative of a Shodan player around the 1880s.

There are a total of 17 games where he only won 5 of them, although the last 5 games from 1889 and 1893 (where he lost them all) came from the collections of Honinbo Shusai (when he was still a shodan) and Honinbo Shuei, so they are probably bias. Just consider the first 12 games from 1884 to 1886, 木原亀太郎 had a winrate about 40% which suggested these games are pretty even and reflect his strength well, where most of them were against Hoensha 7k(3d) to 9k(1d) players.

And my personal opinion about his games is that he was a pretty solid and mostly use fuseki popular around the 1880s in Hoensha games, and favor territory and thick connected groups. Not particularly good at ko fights, but relatively decent at local fights and semeai. Hard to say about his end-game, since most records don’t include end-game sequences.

One interesting thing I notice for transcribing these old records is that since the move number is marked by Chinese numeral vertically, they would use a square to represent 100 (一百) and a triangle for 200 (二百). And I’ve never seen games with move more than 300 (where most of them just omitted end-game sequences). Also, there are surprising few errors and would include error corrections in the next volume if there were any. Surprisingly good quality and paying attention to details. 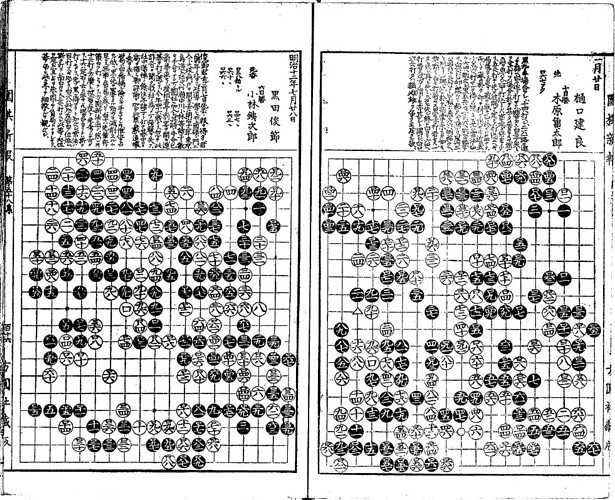 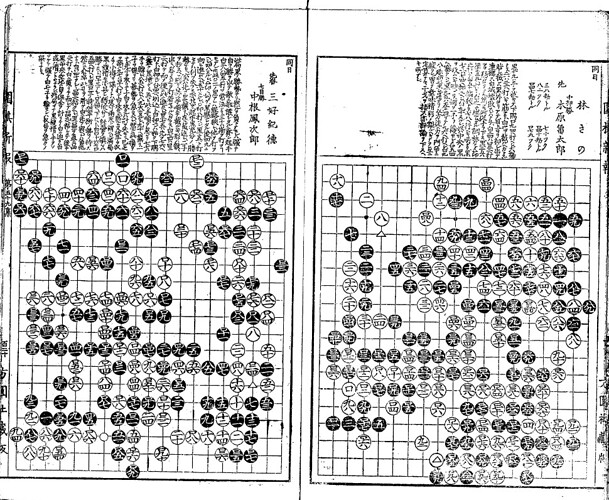 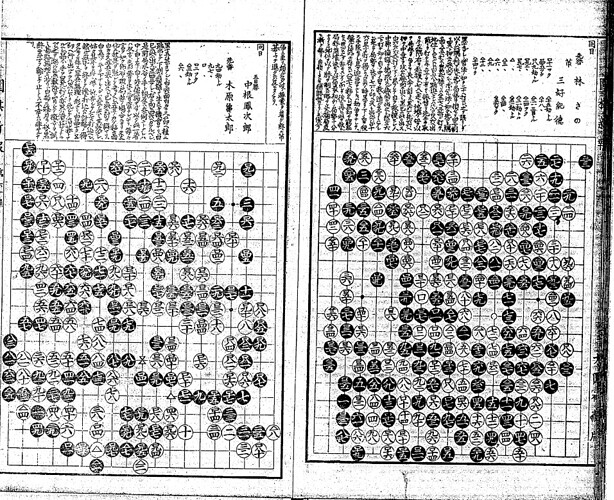 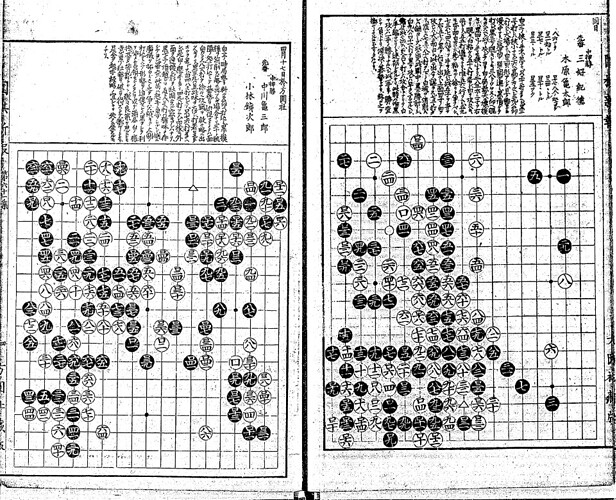 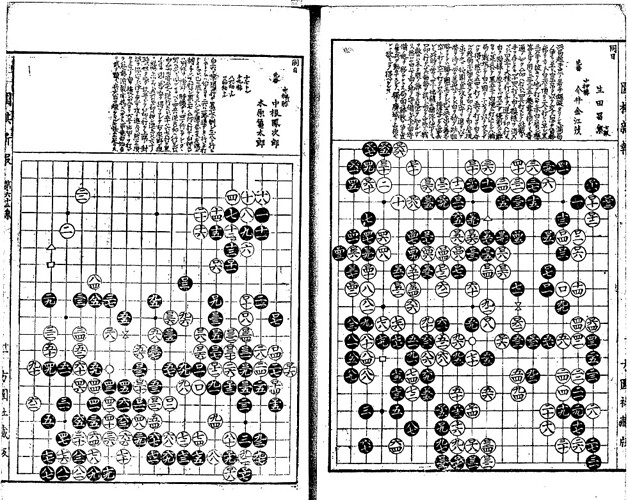 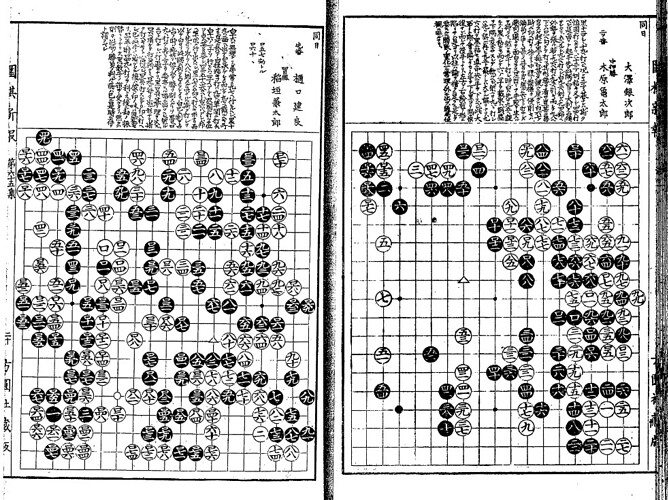 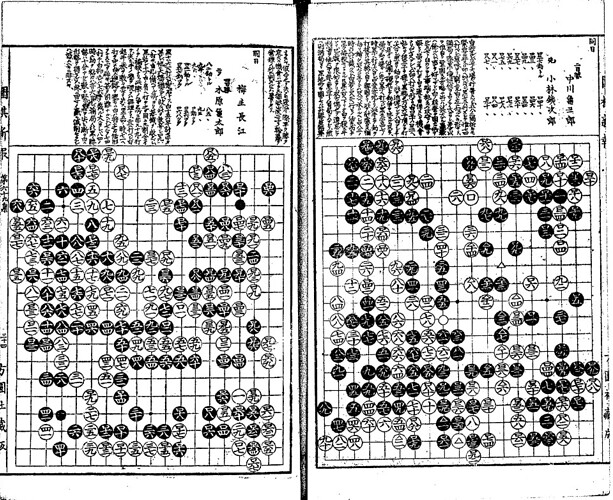 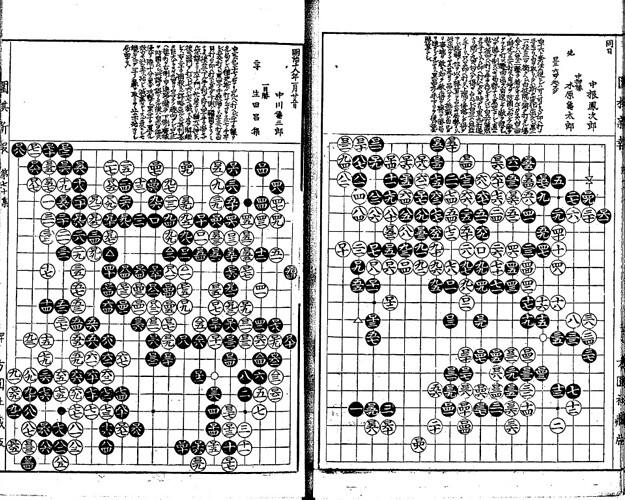 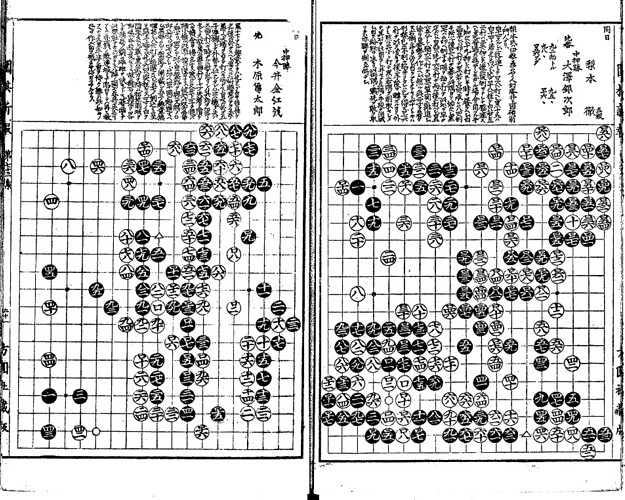 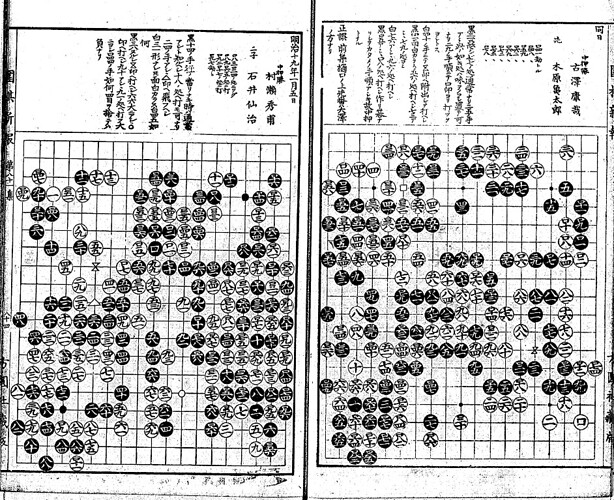 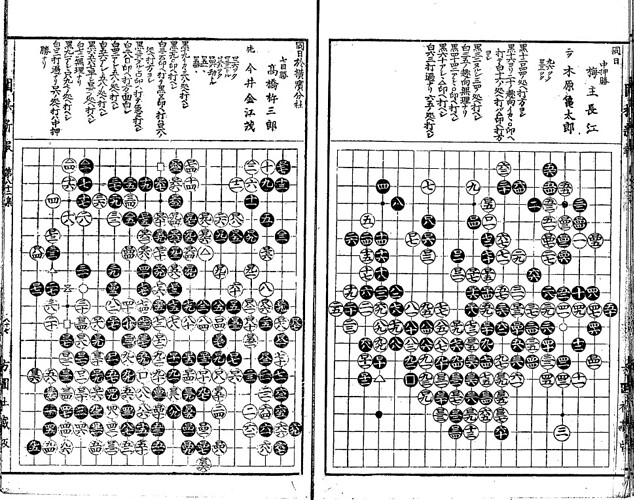 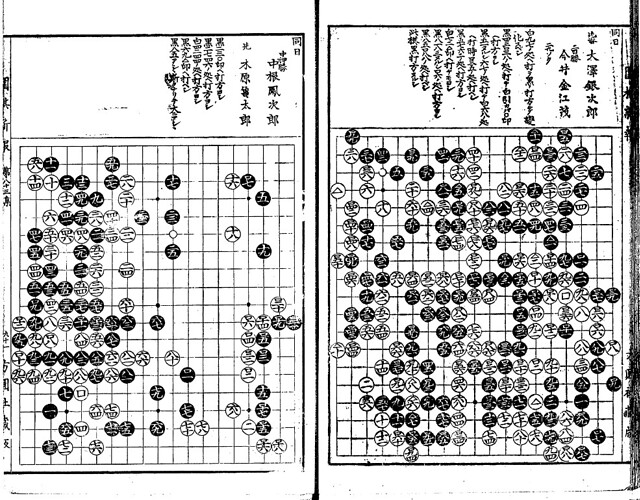 since most records don’t include end-game sequences.

Is this a common practice? How does this work?..

Is this a common practice? How does this work?..

One reason is probably related to the ease of read for the records and printing consideration (if I am correct, printing at the time would require making physical mold plates for each page). Also, I think if all groups are already settled and no end-game ko fights that swap existing territories, there would be no particular interest in showing end game moves (records would show moves to the last major ko fights and mark who won that ko).

And the estimated scores from the OGS AI reviews of these games also showed the recorded scores are very close as AI predicted (no more than 1 or 2 points difference), which indicate even Shodan players in the 1880s were fairly good with their end-games.

there would be no particular interest in showing end game moves

Wow, so records of end games would be deliberately omitted??

At first, I had thought that you just meant that most records didn’t have an end game since one had not been played (i.e., the game ended by resignation earlier)