Will smaller boards be able to get these reviews at some point? 13x13 and 9x9?

I know I’m kind of late to the party here…but this is one of those really rare moments where a software feature has had an unmitigated positive effect on my life. I play all the time, but dont really put any effort into playing and my rank has been flat for many years. I’m ok with that.

this* however really provides easy insight into both tactical situations and the overall strategic arc. I’m still confused a little bit trying to follow LZs train of thought, but for the first time since actively studying at the seattle go center, I actually spend a few minutes after the game looking at what happened.

just as an example, in one game I lost sente making a weak move. my interpretation during the game was ‘yeah, that was a bad move, moving on…’. on review I could clearly see how that one mistake - giving sente for nothing in return - drastically shifted the balance of the entire game.

even if I dont actually improve as a result of these 5 minute reviews, they are really adding a new dimension to something which I already enjoy.

so, really, thanks so much to everyone involved.

Hi, I am new here in this forum, have been playing on OGS now for some months and paid last week for the AI Review. This feature had worked for 3 days and now I can’t use it any longer, it is not offered. There is an “activate” and “deactivate” to click on, but nothing happened. Does have anybody any idea what I can do have these interesting feature back again?

Hi Xaloc, currently only 19x19 games are supported, which is why your recent games don’t have it. I plan on adding support for 9x9, and eventually 13x13 games as well, but that’s a little ways off.

Thanks! Yes I know… …it is a mistery!! After I had written this comment and you answered it is working again, no clue what had happened… I checked a lot of my finished games before without success… Joining this Forum brings me back this feature!!! Great!!

review by Leela on OGS does

At my DDK support level, Leela can’t read out ladders. Not that I needed a review to know what was going on, but it did mean that it continually gave black one options for a move until the point I was forced to capture. 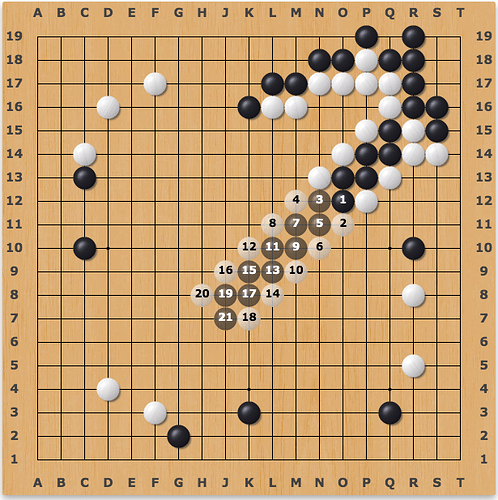 At my DDK support level, Leela can’t read out ladders.

Yes, ladders are a notorious weak spot of modern AI. If it was just that, I would not be posting in this thread.

The point that I made was to show that Leela is strong enough, but OGS has some implementation problem that only outputs extremely weak results.

Aside from this one example, I’ve enjoy the majority of the analysis Leela gives me.

Perhaps it’s because I have so much to learn as a DDK, but I did a test where I had a mid-level Dan do a quick analysis of a game and then compared his comments and recommendations to Leela’s. They were very close to each other. My slow moves were obvious to both and when the shift was very large, that’s exactly when the Dan was making a comment. There were minor differences of opinion, that could just be assigned to style (Leela was advocating to hane on top, the Dan on the bottom.)

The main difference, however, was the Dan could explain why a move was better, where I can find that same big swing move with Leela but I might not be able to understand why that move was slow when compared to its analysis.

And forget looking at it’s play-outs for my level. It seems to make a very “important” move and then tenuki off to some other part of the board that neither I nor my opponent were even playing on.

One could argue (jokingly, of course) that misreading ladders fits perfectly at the DDK level

I’m a big fan of having an AI review feature as part of this site, but it seems to me that there’s something very off about the graph (supporter version).

Also, I’m assuming that the piece of information displayed below the graph is the next move of the game, and that moves effective delta on the winning chance, which would mean that a big number would be accompanied by a large shift on the graph. But then this:

21 percent point is massive, but there’s practically no discernible movement on the graph?

I agree - I think this is another example of the one I reported above.

I think the graph is correct (because it matches what Leela tells me when I run it separately) but the bars on top of the graph are getting wrong data. Fingers crossed that should be an easy-fix… clearly the data is there

I was assuming that it was the bar and delta that was correct and the graph that was wrong, but… well, just goes to show how much confusion it’s adding if there’s an intentional difference

I don’t believe there’s an intentional difference. That would surprise me, and I find it hard to imagine what the intent of that would be

I’m hoping/imagining that there’s just some glitch getting the data out of the graph and into the delta and bars!

I speculate that the graph data and variations are correct, while the bars and delta-percentages are from the 0-visits analysis that produces the top 3 moves for non-supporters. This fits with all our observations

I have also had coherence issues with the graph and percentage changes for moves. What worries me the most is Animiral’s post regarding errors with move suggestions…

regarding errors with move suggestions…

I believe the move suggestions are what LeelaZero actually recommends. With only 200 playouts, LZ will misread most long ladders. I think the failure only becomes apparent after about 400 playouts, after it takes some time before LZ starts considering other moves.

What is confusing is that the move suggestions also include moves that have only been considered once or twice by LZ and then rejected. It looks like these are presented as “good moves”, but they aren’t. I wouldn’t trust LZ on anything that hasn’t been read out during less than 10% of the playouts.

Indeed it occurs rather often that move A only bears a very light green hue… I am also surprised by LZ’s tendency to invade the corner by playing on the 3-3 point below the opponent’s hoshi very early in the game.

It’s an AI standard to play the 3-3 early, one of the big changes AlphaGo has introduced. Now you even see early 3-3 in Pro games. It does complicate the game quite a lot, since the joseki have become a lot more towards fighting than towards settling peacefully.

Many thanks I will definitely check this out

I’m a big fan of having an AI review feature as part of this site, but it seems to me that there’s something very off about the graph

Wow yep that looks pretty wrong. Looking into it now.