An interesting question, i kicked off a full review we’ll see what the graph looks like… seems suspicious though

Feature request: Can we have this on the reviews as well?

The top moves kinda thing? Yeah I went back and forth about doing that, mainly because that whole side of the screen is so crowded already

… but yeah, it’s handy, and more useful with a full analysis that isn’t basing it’s “best moves” off of quick leela hunches

I am also a bit confused by some of the analysis. I looked at the 3 most game changeing moves of this game: https://online-go.com/game/15265573
Black played a ladder that didn’t work, in order to capture a stone. The thing is, at move 97 It says the move H9 (escaping the capture) is -76.3 pp (percentage?), but it doesn’t seem to have an alternative. One move later, after H9, it says the move G9 (continuing the ladder) is -44 pp. But its top choice is G9 anyway. Am I misunderstanding?

S_Alexander: I think what’s going on is the fast analysis works like this: we take a quick hunch of all the moves, pick what we think are the top 3 (actual top three is somewhat subjective, or at least non determinstic). Then we do a full analysis on those three moves, and however the stats work out from that is what we use for the change in outcome. So, while not a perfect system, I think it tends to give pretty good results. I think looking at the full analysis, it’s quite possible that it got it kinda right, but the outcome prediction was kinda weird none the less - i need to dig into how that value is computed again.

3 Likes
Dwyrin is testing the AI / Suggestion for improvement
Please help me understand how this new AI evaluation works
flovo May 14, 2019, 11:17pm #89

Yes, the top moves, full graph and if possible the variations by leela as well. But looking at the site on my computer it’s quiet crowded already.

I was planning on doing more playouts for the production site 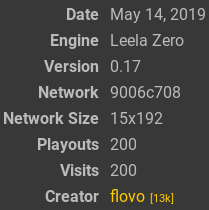 Not sure if it’s intended or by accident. Have you decided that 200 playouts is enought?

200 gives pretty good results, but we do have support for other playouts too, here’s the excerpt from the supporter page:

I have been enjoying the new implementation! Even though I am not a site supporter, I love being able to quickly zoom in on the three most game-changing moves because then I can quickly locate where I need to take a closer look with my Leela Zero engine. Again, I thank you very much for this new feature!

It’s so depressing. The first game I looked at it told me I had totally won it until halfway through when I threw the game away

I was just checking to see if the feature was online. I know the networks aren’t trained to deal with handicap stones and no komi, but still it gave me something to look at in this game:

So it mentions move 0 was a big point, as in yeah I shouldn’t have “passed” so my opponent got two stones on the board. Anyway is there any way it could detect handicap stones and/or ignore move zero as being a key point in the game?

Bearing in mind I’m not strong, so even having it give me one or two points in the game where something could be played better is good. So the moves and suggested playouts it gave me were good I think, something to think about.

Yeah that’s been a problem a couple of other times, I think I’ll update the reviewer to skip over move zero and move 1 today, at least as far as considering them for top-3 moves.

Hi there, I have two questions, I will post them separately.

The first one is:

I very recently (today) became a site supporter, I have several old games that I wanted to pass through LZ, but I’m getting a message telling me I should become site supporter first to be able to use it.

Is there some OGS-specific documentation on how to use/interpret the review ?

As the feature is brand new, I am honestly not 100% sure, but yeah, at the moment it seems it might not be retroactive (though I would try logging off and on just to be sure). If you have just a bunch of specific games you would like reviewed by this method I think you should be able to upload the .sgf to your library and have those reviewed as a workaround…

As far as the documentation goes, there is none yet (the function is still partly in developement). Once everything is settled and running smoothly I will be sure to add it to our current wiki which you can find here: https://github.com/online-go/online-go.com/wiki

at the moment it seems it might not be retroactive

I can counter this. I just retroactively reviewed an old game from long before I was a supporter.

I would try logging off and on just to be sure

I too would try this and see how you go.

huh, I couldn’t do with mine

(pardon the potential misinformation) maybe I enountered another limit as I was trying games waaaaay back.

Bottom line we will get you your review Sniveler

if nothing else works, give us a link to your desired games and I will make it happen from my PC

Great, logging out and back in made it happen, no warnings, only a message saying it started working on the game

I have one more thing to note. Was looking at another top three moves for a game:

If you look at some variations that involve playing on the same point multiple times it seems to show the later move first, so for example at move 35, if I play (one of) the suggested move(s) of A, then the sequences involving the two stone edge squeeze tesuji involve sacrificing two stones and throwing in at the same points.

I’m hoping this isn’t coming across as negative, I’m enjoying the feature so far