Does that mean that losing a group of two connected stones costs one point, but losing two groups of one stone costs two points?

I think that is a consequence of @CharlieVinnie’s ruleset. It encourages people to keep their stones connected.

I’m open for trying new rules, but I would like them to be well-defined.

Every time a group is captured, every player which helped in capturing the group gains a point.

How do we determine who helped capture the group / chain ? Is it whoever has a stone adjacent to the captured group / chain?

Players lose one point when their group is captured, and are eliminated if there’s no points left.

How many points do players have at the start?

Every player can gain at most 3 points in a game.

Do you mean that a player can’t have more than three points at all times, or that the number of times a player gains a point is limited to three?

I appreciate this last rule assuming that it’s the latter case. In the former case (or if there was no such rule), there is the possibility for infinite loops: 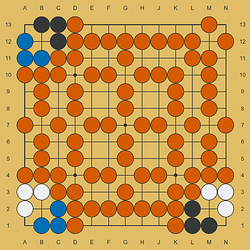 Here Blue, Black and White could work together by continually sacrificing one stone to give the other two a point, which yields a net-gain of one point for them collectively. This way they could collectively outlast any opponent, regardless of their amount of territory.

Here Blue, Black and White could work together by continually sacrificing one stone to give the other two a point, which yields a net-gain of one point for them collectively. This way they could collectively outlast any opponent, regardless of their amount of territory.

This is a good point. If players are allowed to survive a capture, we will need something analogous to a ko rule but with multiple players.
I think it can be solved by adding a rule that players are not allowed to make a move that would return the board to any previous state.

Actually, my intention was that each player can gain a total of at most 3 points per game, i.e, you can gain points only three times, even if you lose them. Otherwise the game might go on for decades.

Maybe we should consider it that way. Because in the old rules, players lose immediately whether they connect the groups or not. This is a way to save themselves.

Here is a detailed rule list (thanks to @NeilAgg , I didn’t have the right words before)

Sorry I didn’t explain it well before @martin3141

I’m a lot less enthusiastic for these rules than for simple capture-go.

So if we decide to use the new rules, would you play or withdraw? @ArsenLapin1

There have been 5 votes cast and 80% say to adopt the new rules. Assuming the votes were all cast by players (Although we can’t guarantee that in an anonymous vote), that means one more vote (Since we have 6 players signed up so far) won’t change the outcome. I think you need to incorporate the new rules into the first post.

There have been 5 votes cast and 80% say to adopt the new rules.

When you summarise the results as “80% say to adopt the new rules”, you’re using a biased poll to claim that 4 people said something that they didn’t actually say.

4 out of 5 people voted to “Accept the new rules”. It is completely implied in that statement that those rules will be applied to this game.

Breaking it into two steps of:

Is being extremely nitpicky.

Seems I can’t edit it anymore

Hmmm. I was able to edit the first post on my thread many times without a problem.
What limitation are you running into?

I’ve updated the original posts rules, I can revert if that wasn’t what was wanted

I think you took out too much. I think we are still going to have most of the previous rules.

I don’t recall what the editing restrictions are, so I’ll make it a wiki, edit it as you want and then I can revert or remove the wiki status

So the question now is to create a board that support point adding. If anyone can show me how to create a “website” like this, I think I can write a program.
@NeilAgg
@shinuito
@ArsenLapin1
@martin3141
@Maharani

which presumably is a kind of fork.

I only know C++, but maybe I can try to make something out of this

At least in the previous games, players would just play a move on the board, it can generate an updated url to share, which can then can be shared in the thread with a screenshot also for convenience for example.

It might not be as convenient as say just being able to click into a site and submit a move, but it does work.

However if you want to go ahead and create or modify something, feel free - it might be really great/useful for this game or future ones!