Is there some reason tournaments don’t show the winners? I’m often curious, can’t figure it out, and have to go hunt around the user pages to figure out who got the trophies. For example in this tiny “double” elimination tournament that just finished, it’s hard to tell what happened:

(I won without the normal final match; I think one of the players got disqualified for timeout in the first round but somehow ended up with a third-place trophy.)

The pairing chart should tell you almost everything.

In first round Roald won against Lepus and you won against Tayru.
So, in the second round you played against Roald. You won that game so you won the tournament.

Double elimination didn’t take place and the reason isn’t clear looking at that chart.
Tayru and Lepus should have played against each other but it didn’t happen.

In other tournaments, such as simultaneous mc mahon or round Robin, with a proper number of players, the pairing chart gives all those informations: players are ordered by score and you can clearly see who resigned or was disqualified.

I guess it is mostly a problem with the elimination tournaments.

But even in the others, if you don’t know exactly how they work, it’s kind of confusing. Consider a Swiss tournament:

To start with, for someone unfamiliar with these, it might not even be obvious that the tournament is over.

It does show a “Rank” for each line, but you have to click around a bit to be sure of what that means (maybe it’s the pairing order for the round?) and which player it applies to. Also, don’t we want to celebrate the winners a bit?

Something like this for every completed tournament would be great: 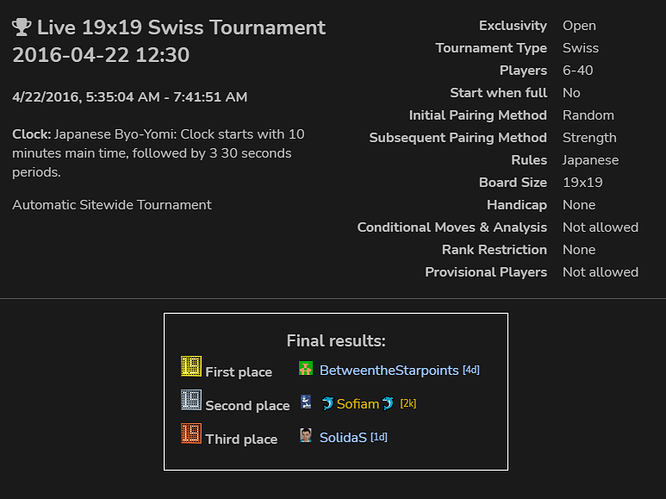 Here’s a Swiss tournament that does not show third place on the main page:

Standings are pretty much only a formality: all they do is show up on your profile’s trophy list. I agree with the idea of putting the top three somewhere on the tournament page. It may be redundant but certainly a good quality-of-life update. And it removes all confusion.

It is not really surprising that the third place is not show on the main page: only 2 players made it to the fourth round (the rest resigned from the tournament or were disqualified due to timeouts).

It might not be surprising given the current layout but isn’t the point that that’s not how it should be? What is surprising is that there is not a separate blob after 4 showing all the full tourney results by default at the end of the tourney.
I can see that’s it’s odd to have to click back to round 1 to find out the full final results.

With an extra blob after the end of last round you would have all the final overall results and then could go back to see the results of each round if you wanted. It might be just repeating what’s under the round 1 blob but at least it would make sense. 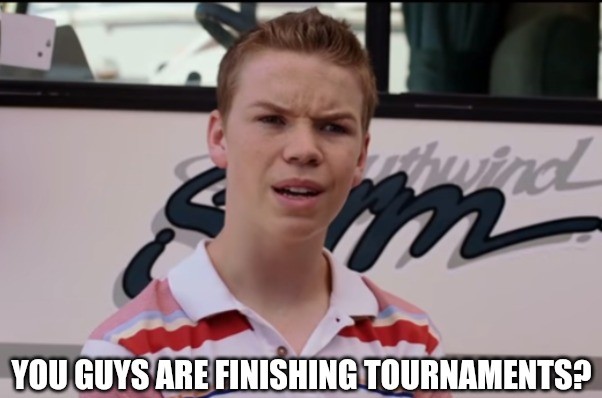