I’d say… if there is no sequence of legal moves (barring suicide / filling the 2nd to last eye?) that could possibly lead to player X winning, declare Y the victor.

I think finding the line between “legal” and “legal except suicidal” is difficult.

Example from a random game, if we consider the blue area on the right: 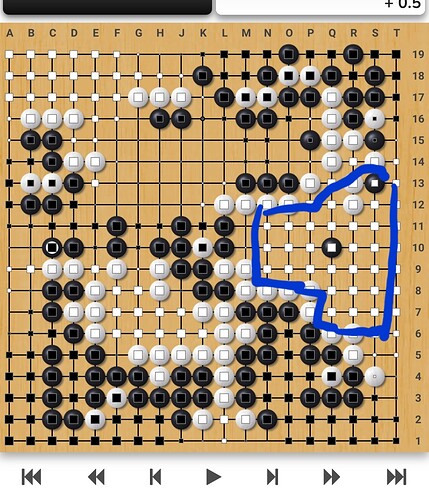 There are plenty of legal sequences that lead to that territory becoming Black’s, but IMO the only scenario where that happens is if white loses desire to live and commits suicide.

Again - if that can’t be done, I simply wouldn’t allow engine judgements.

Defending against nonsense is part of the game; as much as it’s annoying, it’s defensible when newbies are playing.

Stalling by self-atari moves is reportable. A mod will end the game if that is happening.

fools who, instead of wanting to learn, place stone after stone into atari (…)

Stalling by self-atari moves is reportable

Are we still talking about full beginners?
I have some compassion when this happens. One cannot be guilty when understanding almost nothing, and still have a try to win or to feel deeper how lost he is.
Then i will try myself to communicate, won’t call a mod for that, sorry.

Then i will try myself to communicate, won’t call a mod for that, sorry.

Same here. Nothing wrong with calling a mod if one prefers, though; they’re not going to ban someone for being new to the game.

Groin, I agree with you fully. I would never call a moderator because of the ignorance of a beginner. That might make them give up go completely instead of want to learn it better.

Computers can help us get things done. So we should use them. In the case of beginners who do not understand how a game ends, we should have OGS help explain this to them. This helps both players.

The purpose of calling a mod is (1) to decide the game, and (2) kindly to instruct the beginner on game ethics and site rules. The mods are not truncheon-bearing secret police.

Sure, but you know you are crawling in a cloud, asking yourself what are you doing here playing an obscure game, and suddenly, even with a big smile, a moderator come to check what is happening… Not to say they are doing a bad job ofc. I admire our mods team.

I think the discussion is getting mixed into multiple topics, but my two cents:

I agree with @stone_defender general principles for the SE:

Regarding @david265 AI resignation suggestion… I’m not a fan myself. Any level of AI that can handle the ladder examples given above will likely give away knowledge of life/death of groups that DDKs might not see. Also unpopular opinion, but I think ‘useless’ end game invasions are not always useless at DDK levels. Obviously there is trolling potential, but what might be obviously futile to stronger players and AI may not be obvious at DDK, and DDKs must also learn how to kill an invasion. I’ve certainly seen invasions the should not work, survive, and that’s a valid victory for the attacker.

To @GreenAsJade point regarding “placing a few stones” in the current SE; I find that in the mid game it can take a lot (20+) stones to close off territory, which is very tedious

You typically don’t have to place more than a few to persuade it to fill the way you picture.

it should not leave vast swaths of neutral territory

yes, but looks like there still should be limit of distance of influence of stone 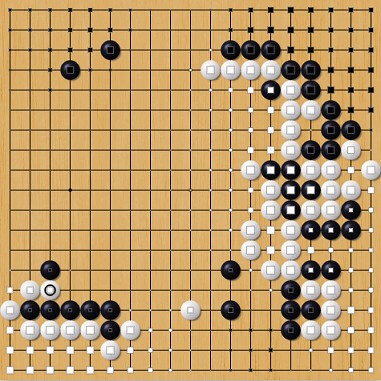 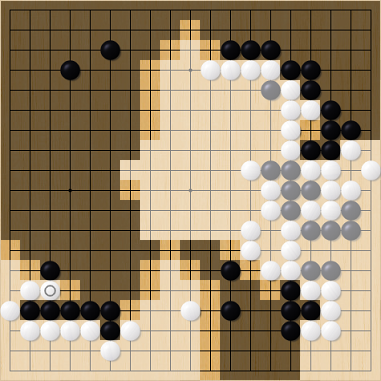 without limit, its b+8,5 on influence estimator 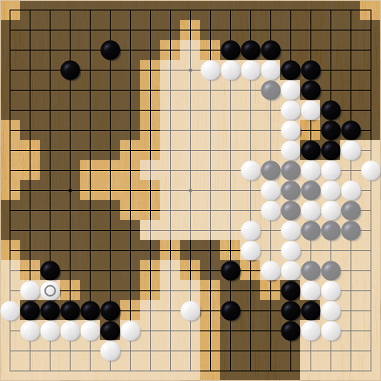 with (max diameter=11) , it shows correct winner w+1,5
it doesn’t makes much sense to paint entire territory as black when there is so huge distance between black stones 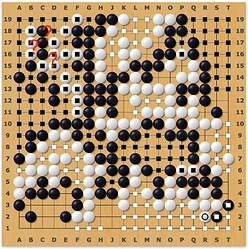 Soo @stone_defender when you putting your estimator on OGS?

Manhattan score would crush the current estimate on boards like this 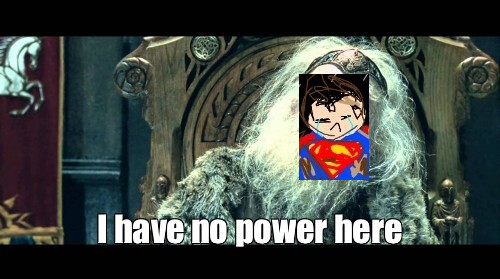 creating algorithm itself is 5 minutes

someone who … understands OGS code is needed. 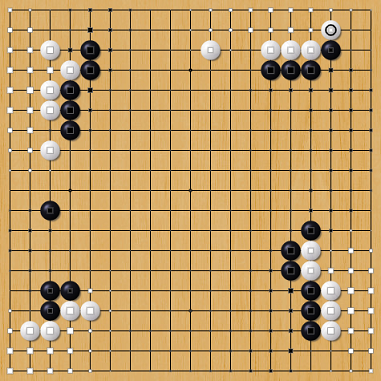 on “flood in all directions simultaneously” estimator its b+52,5 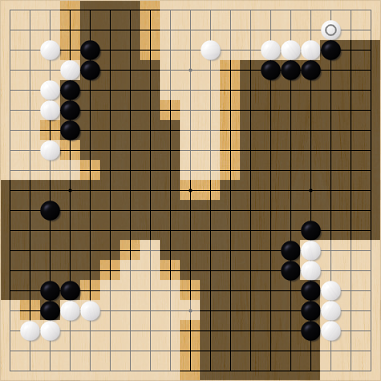 How to fix it?
the law of conservation of mass is needed
only 1 point should be painted each iteration
black, white, black, white, …
(it paints same shape as in pure flood estimator, just slower and few asymmetry is possible) 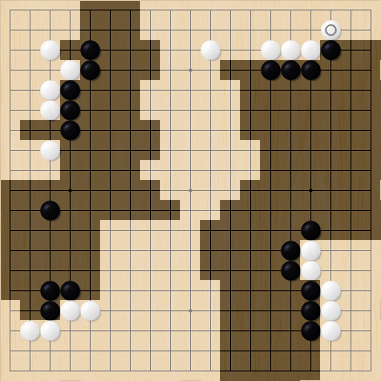 w+6,5
much closer to actual score

and with simulation like above, if we just unpaint points one by one that are surrounded(and count these unpainted points), then we will get correct Japanese rules score.

You may be approaching the Bouzy map algorithm, which is a kind of influence/territory estimator.

It looks nice, but I don’t think one can generate reasonable score estimations from fairly simple algorithms like that, nor should OGS players expect that this early in the game.

And if you somehow succeed to make it as accurate as 5k level positional judgement, nobody would be allowed to use it in their games, because it would amount to outside assistence.

it basically answers question “how game will look like if it continues peacefully, without any dead stones and invasions?”
while AI estimators predict crazy AI fight
my estimator is almost pure geometry, no Go knowledge 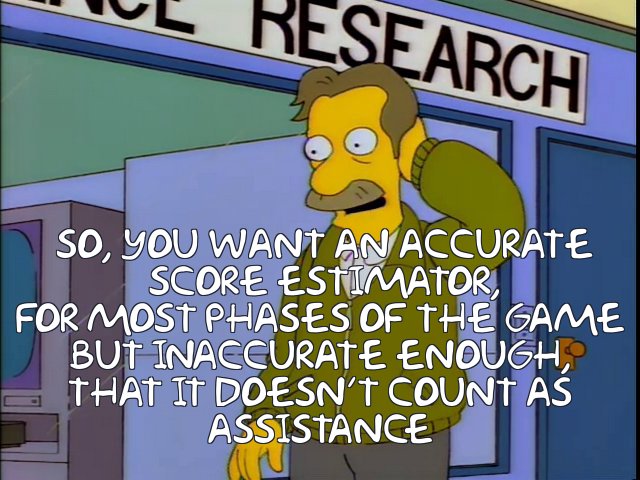 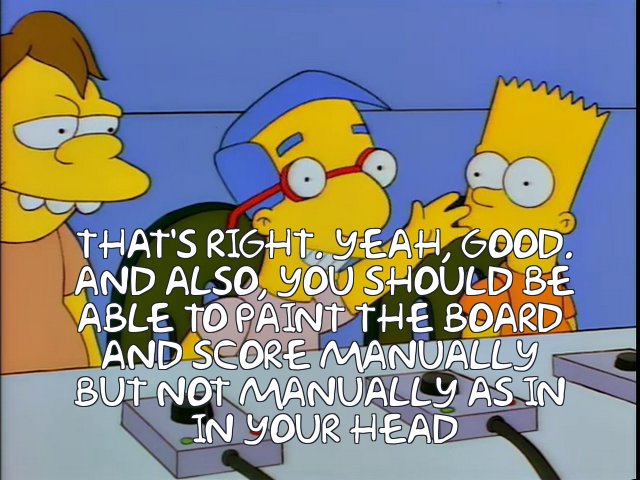 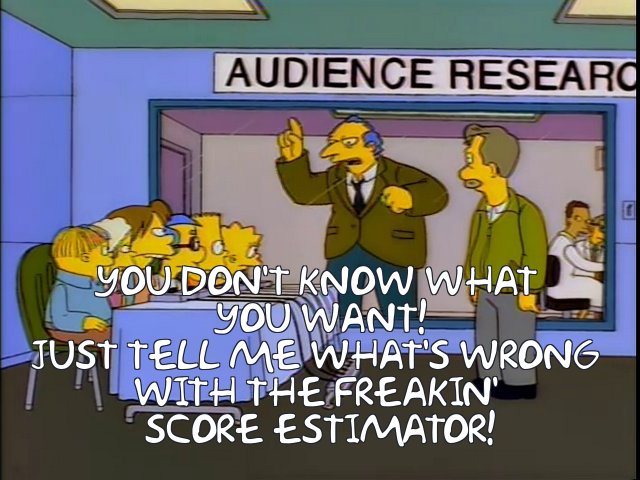 But memes aside, I think people kind of know what they want, a tool to help them count when they’re feeling lazy, just a rough guide to if they’re winning losing, or if they were considering resigning just something to help decide although it might be wrong.

More or less only counting something surrounded or from their stones to the edge of the board more or less, probably ignoring the centre.

Then some people might want a completely manual system, draw border marks stones dead automatically, and some people will just always turn off the estimator anyway.

if you somehow succeed to make it as accurate as 5k level positional judgement, nobody would be allowed to use it in their games, because it would amount to outside assistence.

we always can just stop on this version:

on “flood in all directions simultaneously” estimator its b+52,5

and add ability to easily repaint what it draws
then it will be faster than drawing from zero, while surely no assistance
(it counts all stones as alive until you choose which are dead. May be crazy in beginning, but quality is good in endgame)

1 Like
SE is broken(?) - it assists your reading
← previous page