I took a deep breath and had another go at Samuel Beckett’s novel trilogy Molloy, Malone Dies and The Unnameable. It’s a work I have long admired but haven’t always necessarily enjoyed. That gap has closed considerably. Still, I would caution any readers with a low tolerance for extreme navel gazing. This trilogy will definitely test your endurance, especially in the dog days of August.

The story is so obviously preoccupied with futility and pointlessness that to describe it would itself seem pointless. Yet there is entertainment value to be found, and it does require some sort of description. For now I’ll adopt the protagonist’s own stance and declare that I have no choice in the matter, that I simply must go on if only for the sake of filling up space.

Molloy presents a physically disabled homeless man who sets out on a bicycle to visit his mother. The journey is repeatedly sidetracked, first by a charge of vagrancy, then by a lonely older woman with philanthropic leanings who seems to have taken a shine to Molloy. Other misadventures follow, none of them apropos of anything. I don’t think it’s giving too much away to say that Molloy is never to reach his destination. Anyone familiar with Beckett’s best known work, Waiting for Godot will know this fictional landscape well.

Malone Dies is set in a hospital, or possibly an insane asylum. Molloy/Moran is now known as Malone and confined to a bed, his health in rapid decline, his world now revolving around a few simple possessions; among them a notebook, a stubby pencil, and a stick he sometimes uses to draw other objects to him. Never seeing anyone, not even those who bring his meals and remove his chamber pot, Malone passes the time writing a rather banal coming of age story, presumably based on his own youth. He abandons this story and instead reflects on a sordid sexual affair he had with one of his attendants. Then he tells of a deranged attendant who took Malone and some other patients on an excursion. At which point the second novel abruptly ends.

The Unnameable finds Molloy/Moran/Malone virtually paralyzed, unable to even shift his gaze. Reduced at last to nothing but his thoughts, he resorts to the above-mentioned navel gazing. The Unnameable is a tour de force display of pure stream of consciousness writing. I know of nothing to compare it to outside of Marcel Proust or James Joyce in full flight. The degree of absorption required to get this down on paper and still maintain some semblance of continuity is quite astounding to me. It’s the closest thing I know of to the documenting of what goes on in a dying person’s head during their final days and hours; or at least a plausible guess at it.

And although I’ve described this story as a tale of futility, it can’t be denied that it also has a doggedness about it, a fighting spirit if you will, and in that sense it isn’t the relentless downer that I initially made it out to be. Also not to be overlooked is the boldness of the author’s vision given the usual constraints of having to satisfy publishers, not to mention the fickle public.

I just finished Activities of Daily Living by Lisa Hsiao Chen. It’s a novel about that’s loosely about a woman taking care of her dying step-father, but it’s also about the work of performance artist Tehching Hsieh, the role of art in life, and the aging/dying process.

I’m always amazed by the similarity of our literary interests. I’ve long been a fan of Beckett and have most of his work, as well as several critical studies and a biography. I read Molloy 10 years ago and thought I had also read Malone Dies, but I don’t find it in my annual lists of books read. I must have read only part and then gotten distracted by something else. They are certainly difficult to read and understand, but I do hope t will get back to them.

I recommend Beckett’s collection of early short stories, More Pricks than Kicks. These are superb, conventional stories—much easier to read than that trilogy. I also liked his first novel, Murphy.

Jurgen Osterhammel - The Transformation of the World. A global history of the nineteenth century, 2022.

Still haven’t finished this one for several reasons: two weeks vacation in a no wifi place, too hot to read for some time, other books I read as in between, busy with other activities.
I am nearing page 800 now, so I expect that the remaining 150 pages will take me a two, maybe three weeks.
The book is still fascinating, but is not a book that you race through.

“Amusing ourselves to Death”, by Neil Postman … I am 1/3 in and I am very impressed by the facts that are being presented by the author. How very interesting the amount of genuine love the early citizens of all classes in the USA had for books and debates and conversations and intellectualism (I was massively impressed by the section about the Douglas - Lincoln debates), juxtaposed with the streak of fervent anti-intellectualism and lack of discussion, that eventually gained traction and seems to be increasing each generation. I am very invested in seeing what he is going to make of all the facts he is presenting.

The author is very meticulous to what he is saying and how he is saying it, that it is one of the rare books that you do not have to really worry that round the corner there will be a load of well-presented non-sense, but you can read and feel the genuine care that he put into every sentence.

I’ve been a fan of Neil Postman since he first exploded on the scene with The Disappearance of Childhood. I think I have read all of his books, and Amusing Ourselves to Death is my favorite. I read it in one day, in two sessions. Could hardly put it down. Many years ago, on a visit to New Hampshire to see my best friend, we went to a library sale in a small town on Sunday. The sale had been on Saturday, but they traditionally left the unsold books out back for anyone to take for free. To our surprise, quite a few good books were left, and among them was Amusing Ourselves to Death. Then I did something I almost never do; I thrust the book into his hands, saying something like “This is a must-read book—a classic.” A few days later, when I got home again, he called and said he too had read it in one day.

A few days later, when I got home again, he called and said he too had read it in one day.

It really is a book in the “I cannot leave it off my hands” category, but I am so tired and sleepy these days that it would have been a disservice to sleep-walk through it and miss important points or, even worse, not think about them.

At least this book is small and I will find a way to read it properly. There are a couple of brick sized books in my library that I am worried that I will have to wait till I retire to actually read them, as they were meant to be read.

I’ve been a fan of Neil Postman since he first exploded on the scene with The Disappearance of Childhood.

This sounds very interesting. I will try to find it as well. Thank you for mentioning it

I am so tired and sleepy these days that it would have been a disservice to sleep-walk through it and miss important points or, even worse, not think about them.

There are a couple of brick sized books in my library that I am worried that I will have to wait till I retire to actually read them, as they were meant to be read.

I agree in principle, but there are a couple cautions to keep in mind: (1) every retired person I have ever talked to said they have less time than before they retired. Some of these cases are due to grandchildren; others are because of declining strength (i.e., age-related). (2) Reading may seem an ideal old-age activity, but it requires more energy than many people realize. My father, who died at 91, observed to me that his reading capacity fell off dramatically as he aged. I myself have already noticed this. As a kid I could spend 8, 10, even 12 hours on end reading with just a break for lunch (from 11 to 14, I read over 200 books a year—not kid’s stuff either). Now I find it hard to read more than a couple hours at a stretch. If I do more, I have to break it into chunks.

Not reading it yet, actually still have to go to the bookshop to purchase it 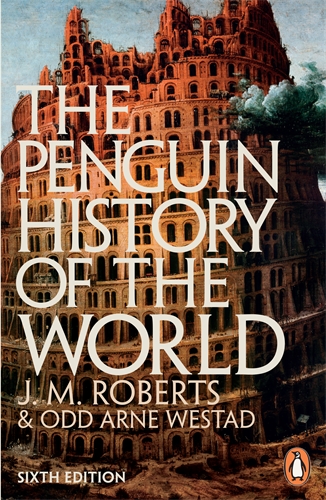 The Penguin History of the World

Loose Ends: I enjoyed Fredric Brown’s mystery, The Deep End, which has quite a lot of psychology in it and makes excellent use of its newspaper and amusement park backgrounds, professions in which Brown briefly worked. Also finished Book Two of my rereading of Montaigne’s essays. I didn’t like the SF group’s current selection, so I quit after 30 pages.

Now: I’ve begun The Big Book of the Continental Op, which has all of Hammett’s C.O. stories, including the serial versions of his first two novels. The book is daunting at 700+ pages in double columns in tiny print (7- or 8-point, I would guess). I’d say it’s equivalent to a 1,400-page book in a normal layout.

also does anyone have recomendations for poem bundles i can’t seem to get into poetry.

I highly recommend A. E. Housman, especially A Shropshire Lad, his most famous book. Housman wrote short, traditional poems that are easy to read. He agonized over his word choice, which is a model of poetic diction. However, his poems are almost uniformly sad, like a literary form of the Blues. Today, literary snobs (profesors) turn up their nose at him, because they consider him too simple, but I have never bothered with what most of those people think. A sample:

"With rue my heart is laden
For golden friends I had,
For many a rose-lipt maiden
And many a lightfoot lad.

“By brooks too broad for leaping,
The lightfoot boys are laid;
The rose-lipt girls are sleeping,
In fields where roses fade.”