Why bots which can't read a ladder can play rated games?

I can’t read ladder (without analysis). Should I be not allowed to play ranked games?

But you are not a bot, you will avoid ladders (and playing them to the end capture) if I challenge you.

Note: I am sure you can read that ladder in this game btw.

all bots (and all players) have certain weaknesses…

Also, deliberately exploiting a bug to play the same game against a bot multiple times is cheating and will get you kicked, this is very different to just knowing the bot has a general weakness, which you’ll find most players have if you play the same one often enough

I wonder how one can distinguish between cases of
“deliberately exploiting a bug to play the same game against a bot multiple times”
versus
“just knowing the bot has a general weakness, which you’ll find most players have if you play the same one often enough”.

I wonder how one can distinguish

So if you play a bot with a ladder weakness many times and many of those ranked games feature the bot running out of a working ladder, it’s OK as long as those games are all different?

Maybe limit max number of ranked games / day for bots?
Then they will have not outdated rank and humans will not be able to farm rank from it unlimitedly.

nah unlike the rest of the community, bot owners tend to be pretty good at noticing and reporting whenever this happens

Abusing high-ranked bots with ladders in repetitive situations is a very easy way to rank up for the purpose of airbagging.

It’s not just bots that can’t read a ladder that play rated games. Dreaming Elephant plays the same faulty fuseki til it gets taught in games that it doesn’t work. It is pretty easy to play it in unranked, learn it’s current fuseki while losing to it, then study the fuseki with your own bot and play DE in ranked (a mid-high dan bot) with a huge advantage - knowing exactly where it is going to go wrong in a small board.

The difference between weaknesses of bots and weaknesses of humans is that it is much harder to study people. Even if you do, human go is much more dynamic than bots. Knowing that spectral or dogebot will fail every ladder you start in all games, changes the game essentially. It is not the same as knowing a human player might fail with a shape or a joseki because they did it before. There is always a chance with people to have learned from their mistake and you can’t play people over and over to study them without them having played/studied you in return.

If you’re playing these bots to cheat in some way however, it is pretty convenient. It is easy to figure out that by playing these bots occasionally and offering established ladder and semeai variations whenever convenient, you can “adjust” your rank, in either direction. Someone who wants to sandbag can play a direction of play game without forcing semeais or ladders and they will lose in a legit way every time. It is technically almost impossible to call them a sandbagger despite the intent. Similarly, someone who wants to airbag can play the bot and offer ladder variations (just every now and then to be subtle) and get closer to the bots rank than they actually should be able to.

It would mean much less work for mods and much cleaner rank-pool in many ways.

you can’t play people over and over to study them without them having played/studied you in return.

This is very well said.

I will start posting bot games on here to display how they are strange and more disruptive than useful for ranks. (unless anyone can think of a more suitable thread for it)

Here are some of the games by Amybot that ended in a timeout, today. There are more, even amongst todays games.

In another thread Eugene said: “However, a solid purpose to have bot games being ranked to provide newcomers with a quick way to get a rank. It’s definitely the case that some people like to do that with a bot before getting into ranked games with people.” So, I will also be checking what ratio of games played by these bots are actually against people who are new to the server.

So far, I checked Spectral-4k 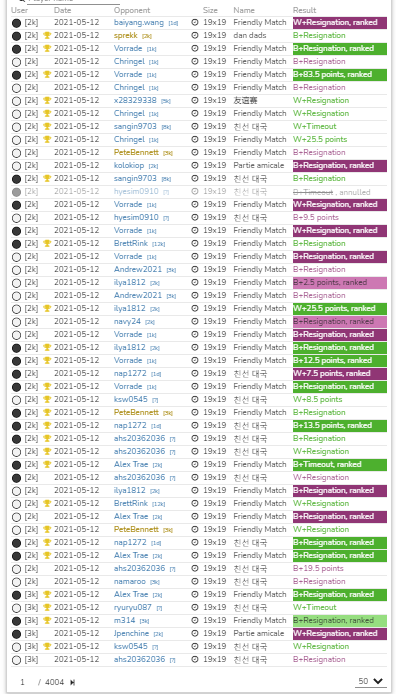 As you can see, not a single ranked game against a ? in the last 50 games, while many ? people played it in unranked games. All of the last ranked games by this bot are against established players.

Some of those games are like this one: Partie amicale

That user might be borderline is definitely exploiting spectral, for it’s terrible ladder reading.

Something to be considered is the motivation of the people who bring their bots online. If they cannot get rated games, not sure they will still enjoy to do it.

The bots “one can abuse easily” could be provided by OGS itself, if then there is a lack of them (ofc offering not rated games only).

I join this idea. The quantity of games has to be well studied to stop quick enough before offering exploit opportunities. Then the restriction could be canceled for the “not that easy to cheat” bots.

On a tangential yet arguably related note, I find it surprising that there is such unanimity on the necessity of preventing exploitation of the bots. To give an alternative perspective, the general feeling of the Arimaa community would be that if there’s an exploit, that is a legitimate way to win against that bot, though players may be encouraged to make a second account for exploitative bot games.

One reason for this may be that for a large portion of Arimaa’s history, and in many ways still today, there was an emphasis on “Man vs. Machine”, and exploitative strategies were thus a means to keep ahead of the bots.