arguably more valid than, say, playing a stone inside the opponent’s living territory

Sure, but that’s seen as unsportmanlike too. Also Uberdude did not say it would be used to waste time, but to gain time, which may be related, but definitely is not always the same. Personally I wouldn’t see playing a ko that makes no sense to gain time for reading a complicated situation as unsportsmanlike. Not sure if there is any consensus about this.

Sorry, I’m not understanding how playing a ko could be unsportsmanlike, or used to waste time.

Good, because it’s not and I didn’t say that.

I think “time suji” moves (forcing moves) are a fairly common thing to gain time during byoyomi. It does lose ko threats, but that may be acceptable to gain time in a complicated situation. I don’t think this is considered unsportsmanlike.

At this point I am not understanding the subtle distinctions being made, or why ko is related to timing at all. I apologize for my ignorance, I guess, being only 9k and mostly one who plays 9x9 games.

I think you need to remember what time controls are being used. If you have Fischer with say +15s increment then a few rounds of a ko fight or a few forcing moves (that waste ko threats) can build up a bit of time quite easily. On the other hand with byo yomi it doesn’t gain you anything in terms of time.

So both in byoyomi and Fischer time, you can use “time suji” moves to give yourself some extra time when you need it, but the execution is simpler with Fischer time (when time increments/byoyomi periods are more or less equivalent).

instead of a fixed maximum time per move (here called Fisher timing).

Perhaps the problem is everyone else is talking about Fischer timing which you appear to misunderstand given you describe it as “a fixed maximum time per move” which it is not.

No need to apologize, it’s a reasonable choice. But that’s still not Fischer time.

OK, so I found one of your games, here is the time info.

Fischer: Clock starts with 1 minute and increments by 2 minutes per move up to a maximum of 3 minutes.

The essence of Fischer timing is that increment, 2 minutes in your case. The maximum of 3 minutes is an invention of OGS and not actually part of real Fischer timing, and is usually set much larger than the increment so that you can build up your time from playing many moves in less than 2 minutes.

This is probably yet another case of a feature designed for correspondence play (a max time makes sense there) carrying over to live where not appropriate. The max time for live used to be impossible to set greater than 1 hour, which meant various EGF events couldn’t be held on OGS because they wanted real Fischer, not fake Fischer with a max.

Ah, so I think this is vital context to your questions. 2 minutes per move in a 19x19 game would mean a game lasting ~8 hours typically, maybe quite a bit longer if the game went on for 300+ moves and each player used all their time. (Or 12hrs+ for 3 mins/move)
This might be fine for professionals but for most other people we can’t devote that amount of time to a single game.

So the answer to the question

why anyone would want to use byo-yomi timing

Is that people want their games to finish in a somewhat predicable time frame but without distorting the game too much.
Simple time (fixed time per move) for ~2hr game is 30s, which might be fine or for a ~1hr game only 15s.
So:

Is advanced player thinking time so variable that they need to average it out?

I don’t think you need to be too advanced to need more than 15/30s from time to time over the course of a game.

And sure, absolute time would solve the problem but introduces issues at the end where a player with a clear lead might struggle with a moderately complex endgame position or trick and time out and lose “undeservedly”. As I said you can argue about the rights and wrongs of that but in general people prefer to know roughly how long a game will last but also that it will have a “soft landing” at the end.

This can be done with byo yomi, Fischer or Canadian ofc but byo yomi I guess is the original evolution from sudden death.

Perhaps it would help if I state more clearly, and in the context of 19x19 games, that my ideal timing choice would be “a reasonable time” depending on the complexity of the current game position. For example, the first move could have a limit of one minute. Why so short? Because if my opponent is suddenly called away from their computer, I would like the game automatically terminated after one minute. For the next move, the time could also be one minute or perhaps a bit more. Since a joseki could occur, some beginning game times would naturally be less than one minute per move. Moving on to the middle game, sometimes moves only require a few seconds, such as connecting a group in atari to safety. But sometimes a lot of thinking needs to be done. So a maximum time limit of one minute would be unfair to someone who wants to take the time to look ahead a few moves. Perhaps five minutes would make more sense, or even more. Moving ahead to the endgame, moves would tend to get faster, but there still could be some thinking if one or two points have to be eked out by the choice of yose move order.

Why did I go into all this detail? Just to say that ideally I want unlimited time for every move, but the reality is that an opponent could disappear at any move (for many reasons). So some sort of timeout seems to be needed.

I posted concerning byo-yomi, only because that is the default and most popular 19x19 timing, and I find it confusing.

As a proposal, I think that timing should be mutually agreed upon, meaning that one player could request a time extension if they need time to think, but that each move would be timed so that if a disconnection occurred, the game could be saved for continuation another time in the future. My thinking is still a bit muddy, and it seems to be that computer software might be able to detect if an opponent leaves. In this case, the time limit could be large, like 15 minutes, since it would rarely be needed.

This is pretty similar to what we already have. You can choose various time settings, allowing for a bit more thinking time early and midgame with faster endgame (byo yomi would seem to work well for what you describe actually) but if someone disconnects then there is a separate timer which counts down and times them out if they don’t come back. I can’t remember the exact time but it’s something like 5 minutes.

Correction, the timer isn’t separate. I think it used to be years ago but it no longer is. Your main time is ticking simultaneously with the dc timer. When one of the two reaches zero the person loses by a timeout.

When one of the two reaches zero the person loses by a timeout.

This doesn’t happen for me. When my opponent reaches zero on the connection clock, it is reset (wraps around) to the same positive value it starts with, and the game remains open. Only when the game clock reaches zero does the opponent lose. I’ve seen this behavior several times.

That is unusual. Maybe it behaves differently with other time settings then. The behaviour I described is what I saw when using japanese byo yomi.

Probably different for some reason. I use Fischer timing since I understand it.

The disconnection clock is 5 minutes, and it runs simultaneously with the player’s time clock. The game ends when one or the other expires first. Once upon a time, they were not simultaneous, but they have been for more than 3 years.

I don’t currently play live 19 x 19 online, but I might, and I do play it IRL. Like @shinuito I prefer byo-yomi for live games because I find it simpler to manage without much thought. One can avoid the nastiest escapers, who hold the game open to avoid the disconnection clock, by using a main time setting of 5 minutes, followed by whatever byo-yomi you prefer—in my case, 5 x 1 min in 19 x 19, or 5 x 30 sec in 9 x 9.

Out of curiosity I made a statistic to find out which time setting had the most timeouts. Here are the results from my personal games. 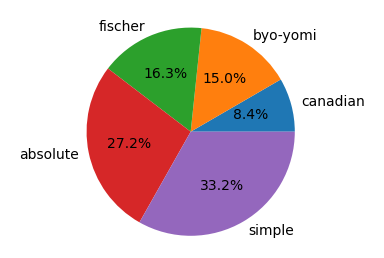 In my sample only Byo-yomi and Fischer have a healthy amount of data. The other 3 numbers may be inaccurate. Canadian might have a low timeout % because I’m rushing all moves except the last move of a period and then it’s hard to time out with 10 minutes on the clock.

Right now I don’t have OGS database dump at hand to analyze. But this 5k games should prove that actually byo yomi isn’t as terrible as we thought. It could affect the quality of moves but not timeouts.