At the timestamp below, he says “here is a ko” 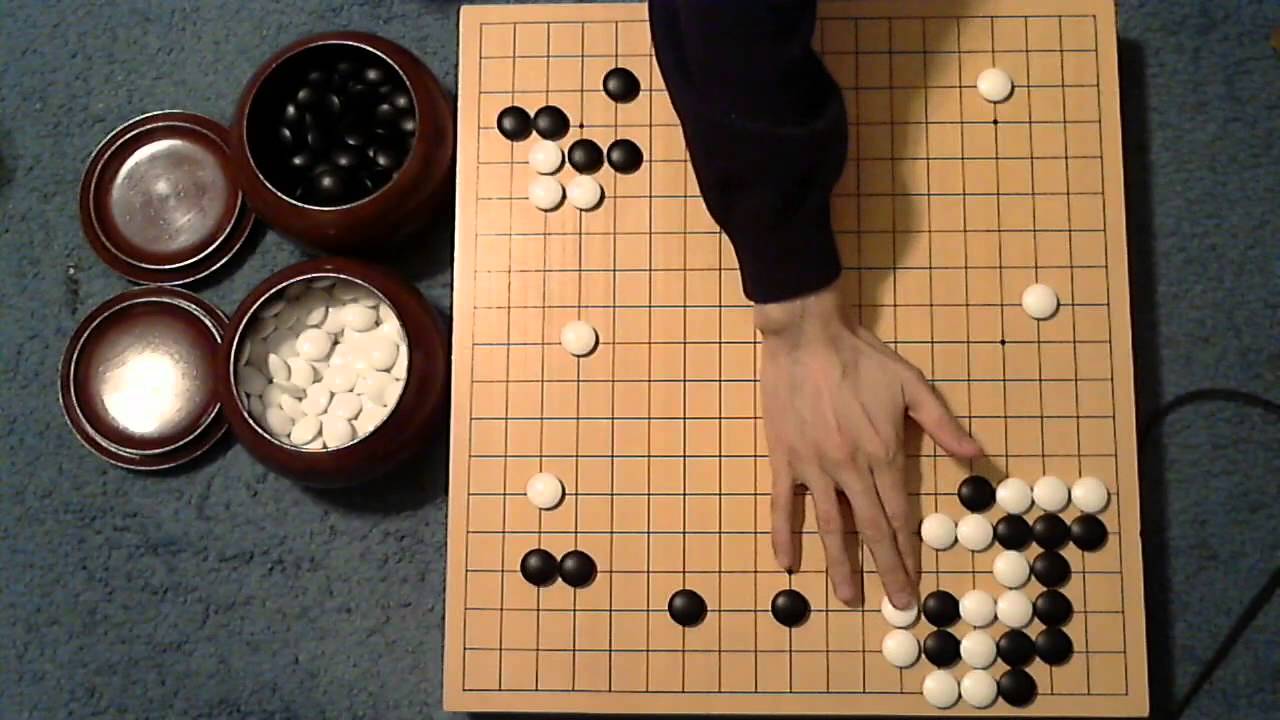 Obviously I can’t see it. I’ve been trying to understand how the thing works (asked here before as well), but those stones seem way too early to spot the ko, compared to other ko threats I’ve discussed.

Can someone do the noble thing and walk me through it? 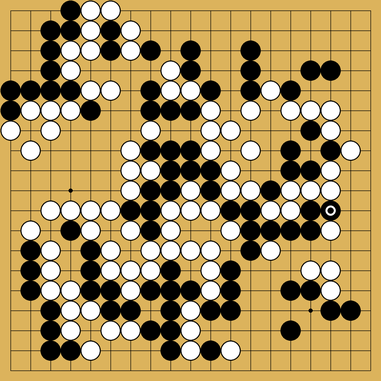 I grabbed the game from the video, sadly it’s rotated because of the camera, so actually the position on the bottom left is upper right.

I’ve shared a variation in the game.

(unless I misunderstood it

So, to be aware in a similar situation, it could be a false eye and one of the “false eye sides” stone can be atari’ed? Something like that? Or am I going about this completely wrong? 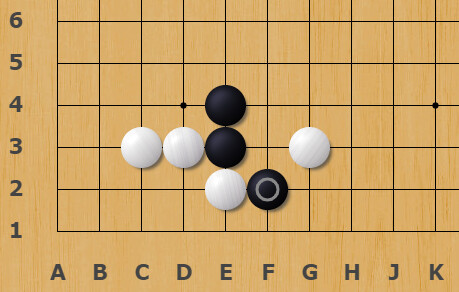 In this case, black’s last move completely disconnects the white stones. White cannot cut at F3 next, since black D2 would capture E2. So we could instead expect wD2 bF3 next. 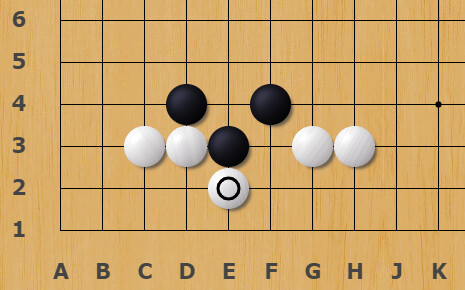 In this case, white’s last move completely connects all the white stones. If black tries F2, the F3 cut comes with atari, giving white time to save E2 from being captured: 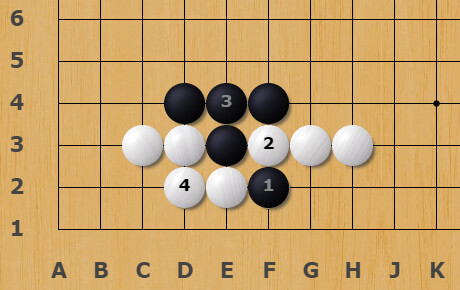 But now consider this situation: 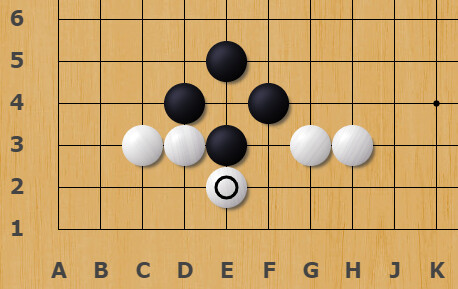 We might expect it to still be connected, since F3 would come with atari. But because of the extra stone at E5, black can ignore the atari and go for the capture with D2: 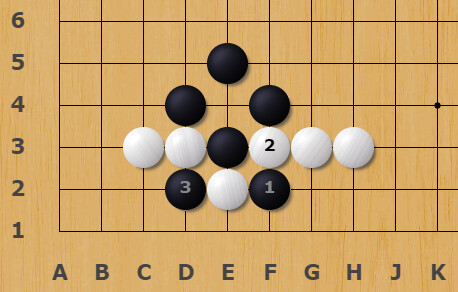 White can capture at E4 to stay connected, but if black can find a big enough ko threat, black will be able to capture back. So in this case it’s a ko fight for whether white is connected or not - it’s neither solidly connected nor solidly cut!

I think @shinuito’s variations correctly capture what Dwyrin meant. The hypothetical play there by black does not immediately create the ko, but it forces a line of play that leads to a ko fight.

If black wins the ko fight, they can resolve that position by cutting white’s position in half.

So, to be aware in a similar situation 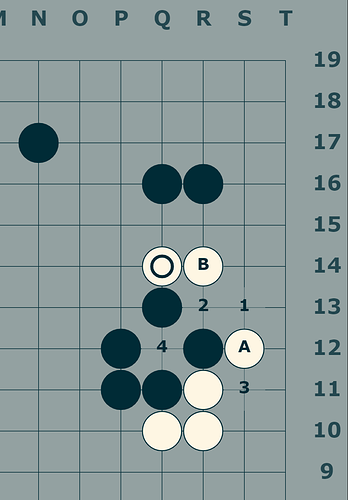 The stones at A and B are connected by a knight’s move, which is vulnerable from being cut by a black play at 1, however, white can fight back with sequence 2-4, which leads to the ko fight.

Note that black playing at 2 (instead of 1) would not threaten to disconnect white, since white could then connect by playing at 1.

Interestingly, the AI analysis suggests that the last move by white (at the circle) would have been slightly better at 2 instead. This would keep white connected instead of allowing black to possibly initiate this ko fight.

Just to add to the other answers as well about trying to recognise kos:

Where white can capture a Black stone and Black captures back later because of the ko rule. 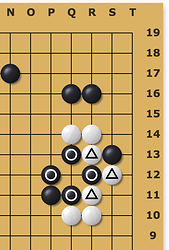 In that position on the linked board you can see the same shape and stones marked.

There’s other ko shapes in the corners and sides. Borrowing some pictures from Ko at Sensei's Library

Ah, I see. So, if I understood correctly, for example at move 23 if black played B18 instead of C18 (just for the example, not that it makes sense), it would be a ko possibility? It would create that kind of shape?

Part of the issue here might also be how we understand which move “starts a ko”. In this variation, which move is the one “starting the ko”? 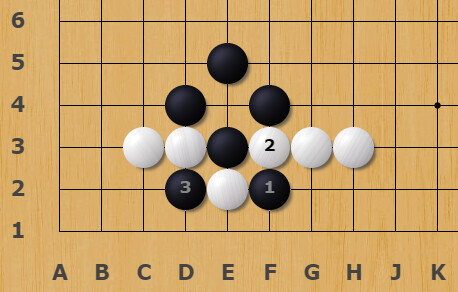 Is it 3, allowing white to capture the ko? Or is it not until white’s next move at E4 that the ko is officially started? Or is it black 1, initating the sequence which leads to the ko? Then maybe white E2 “started the ko”? But what if E2 was played a long time ago, and it was much later that black chose to initiate the ko with 1?

It turns out that this notion of who decides when it’s time to start it is more useful than what particular move takes the ko first. In this case, black would never play 1 without planning to follow up with 3, so we can safely say that 1 “starts the ko”. (well, it attempts to start it, white could just play elsewhere…)

To see the same idea applied in a different context, consider any tsumego where black can play first to make the result ko, like this one: 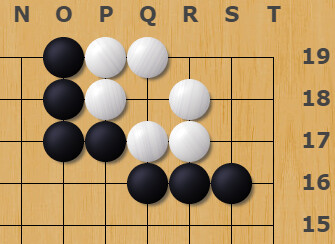 The correct sequence for both sides looks like this: 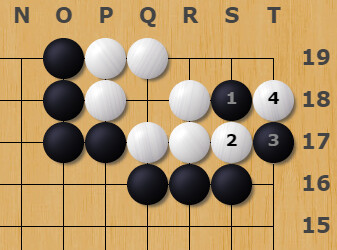 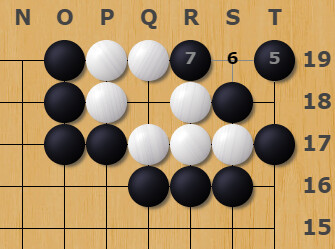 So it’s not until move 7 that we have an actual ko on the board, but we would still say that move 1 is the one that “starts the ko”, because the local sequence after that is a one-way-street.

Edit: Actually, let’s be more precise like this: Black 1 indicates that black would like to attempt to kill the corner. It’s saying “hey white, I want this corner, will you fight me over it?”. White may accept the fight immediately, or play elsewhere. If both sides plays elsewhere for a few moves, then white comes back to start the ko sequence, we would also say that that white move started the ko. So anyways, language is messy, and maybe not the main point here. Sorry if I confused things unnecessarily

Sorry if I confused things unnecessarily

oh no I’m loving this. But why it’s a ko, white can’t recapture at S19 because of ko and with S18 black kills everything?

I’ve added a variation for that

I think the shapes are a nice way to get started on recognising where kos are possible.

White can’t recapture because of ko, so white has to make a ko threat first, then (if black answers the threat) white can recapture! This is how all ko’s work

where will white play? whatever happens black plays at Q18 and kills, no?

If this was the whole board, white would indeed be dead. This is why it’s so important who takes the ko first! (in the orginal problem, there are other ways to start the ko which lead to white taking first, but black of course chooses the one which is worst for white).

But all hope is not lost for white, if there is some big ko threat elsewhere on the board:

This is the nature of all ko’s, it will be captured back and forth as long as both sides can find big enough threats. Eventually, one side gets to finish the ko, and the other gets some compensation elsewhere.

Eventually, one side gets to finish the ko, and the other gets some compensation elsewhere.

I want to point out an interesting wrinkle in this statement, which I’m sure @le_4TC is fully aware of and just avoided for the sake of a simpler, clearer explanation, but I’m far more pedantic and feel compelled to say this…

There are some positions where life and death hinges on a ko fight, but one can delay starting it. A peculiar aspect of the Japanese rules is that essentially one player might not need to ever start the ko fight to kill, and, during scoring, after passing, can effectively declare the ko and position settled in their own favor, without having to give compensation elsewhere.

Under various area scoring rules (like Chinese, AGA, New Zealand, Tromp-Taylor), these positions behave differently, since resolving life and death disputes requires “playing it out”, where compensation could have to be given to settle ko fights (e.g., if there are unremovable ko threats), which might compel a player to never start the fight in the first place.