10 moves in a row for both players - advantage for whom?

A friend of mind had asked me a weird question. If Black had ten moves in a row (like ten free placement HC stones). And then White had the same priviledge. Who would benefit more from this deal?

It got me strangely intrigued. Obviously Black could get the strategically important points (like corners), but then again, unless they are very secured, White might completely ruin some of those, and if Black overconcentrates, White might get ahead by forming a larger framework… I am not sure, what do you think?

Anyone willing to try?

The whole premise of Thue-morse fair sharing sequence is that earlier moves have more value than later ones (beginning vs endgame) and that simply alternating b,w,b,w is not fair enough because black gets the biggest first move (or initiative?). Based on that idea it would be logical for the first player to get a very large advantage if he got the first 10 moves.

I do not know (obviously), but I am not sure the logic applies in such a big batch of consequent moves.
Personally I would be quite willing to take W in the proposed scenario, maybe even preffer it.

I just tried a quick sgf trying to imagine how I would play for both sides, and funny enough acording to KataGo it ended up almost exactly 50x50

You MIGHT have failed to find the objectively optimal strategies for white and black in your very first attempt? Well, at least admitting to such incompetence is sort of brave!

More seriously: If we discuss this for n instead of 10 it becomes obvious that there is a threshold t, so that for all n >= t black wins, because obviously if black can fill half the board white can’t do anything but pass. My gut feeling is that this support the idea of black having an advantage, but yeah, how can one be sure???

Edited: No idea why I totally mixed up black and white. Edited this so it might make sense now (but who knows).

I would be interested in some example matches if anyone wanted to try, but I play correspondence only now, so it would take a lot of time with me included

If I let katago select the first 10 black moves and then 10 white moves it tells me the game is 50-50.
If I manually pick black moves and then let katago pick white moves then I get a game where black is at 75% winrate like in the picture below. But how could I, a weak SDK, know better than the worlds best player? Obviously katago fails to consider that the opponent doesn’t answer. However I still can’t seem to find better moves for white than katago suggests 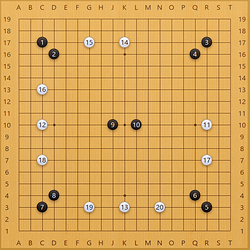 With a bit more emphasis on 4th line for white I get a slight advantage for W, but yeah, I am not sure how much we can trust the bots with these unorthodox game progressions 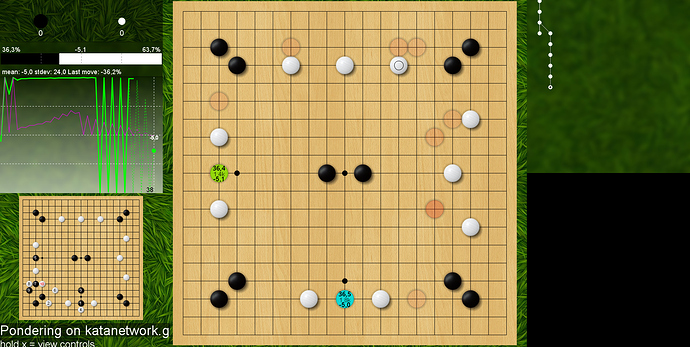 First off, if N = 77 or more, I’m pretty certain that White can never win. Black just blocks off over half the board. (The last move isn’t even needed, now that I look closer.) 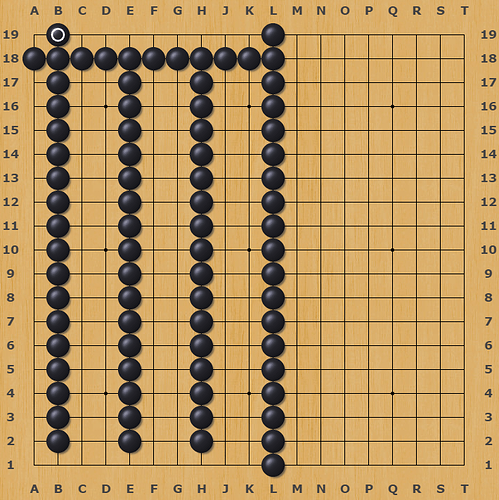 Second, KataGo can’t solve this problem just by itself. If black places the 10 stones as shared above, White can get a huge advantage. 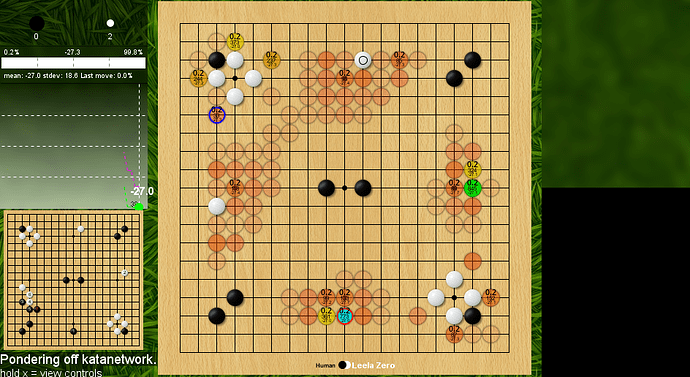 Hehe, at first glance I was like: “Mark, you forgot two stones for Black”. And then I remembered I am just stupid

Assuming no komi, clearly Black has the advantage for N = 1 (a normal game) and very large N, which easily yields a sure win (and can even preventing White from establishing a living group in the extreme).

I believe @AdamR is questioning whether there might be some sweet spot for an intermediate value of N where Black’s advantage is reduced (compared to N = 1) or even White gains the advantage.

I conjecture that the advantage for Black increases monotonically as N is increased. I think with a moderate number for N (like around 10), Black should spread out their stones to enclose corners and add a couple of side extensions. White playing the next 10 stones could cause some disruptions to those enclosures, but cannot simultaneously disrupt all of them. Just speculation and intuition, however.

with a moderate number for N (like around 10), Black should spread out their stones to enclose corners and add a couple of side extensions. White playing the next 10 stones could cause some disruptions to those enclosures, but cannot simultaneously disrupt all of them.

Interesting idea. But it’s shockingly easy to disrupt an enclosure in two moves. 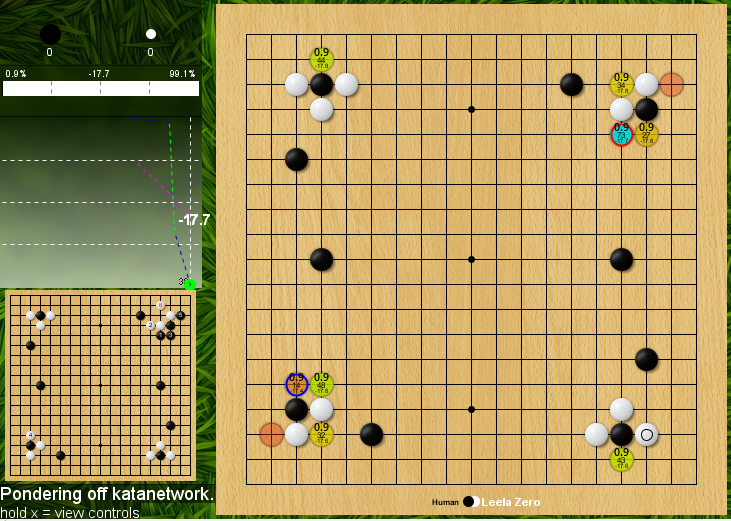 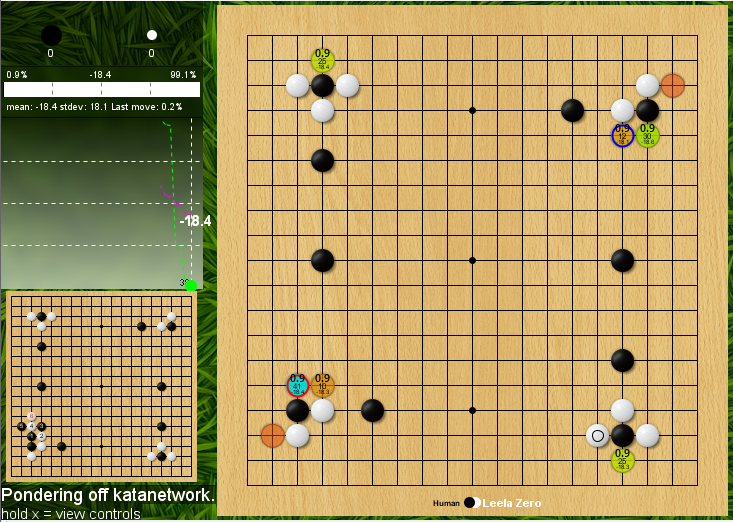 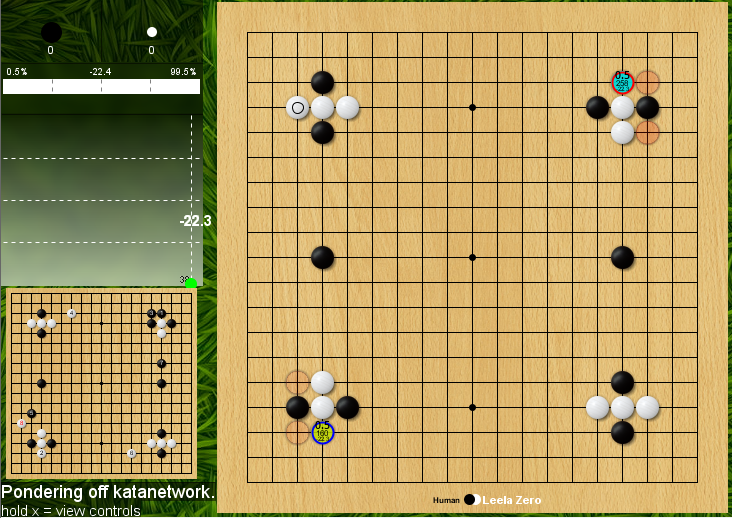 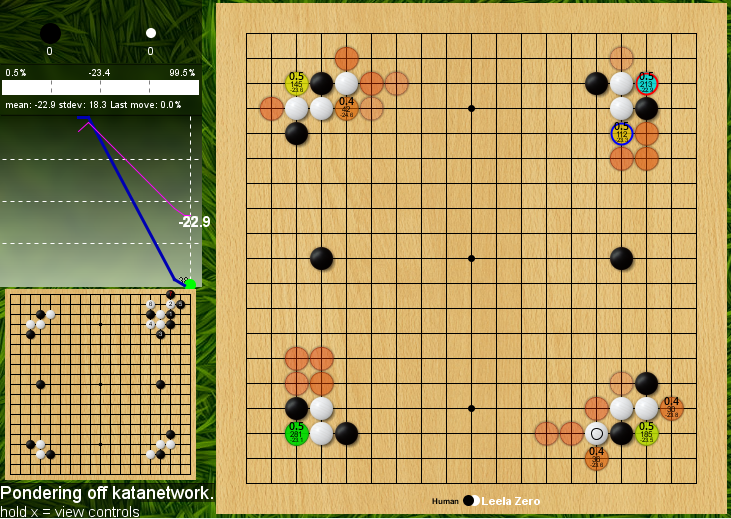