Currently, we use komi (bonus points for White) to try to resolve the inherent unfairness of the BWBWBWBWBWBW order of play, clearly favouring Black. There is much debate about what value best achieves this and whether the same value is true for all 3 standard board sizes.

In the past, before komi, some people would play a jubango (a 10 game match) where players would take it in turns of who got to play black and white, but this too followed the ABABABAB pattern (unless one player won enough games with the weaker side that his opponent was forced to take the handicap of always having the stronger stones). You also need the time to play your opponent 10 times.

Mathematics has its own approach that is not dependent on set (board) size. The Thue-Morse sequence. Instead of ABAB it starts ABBA, immediately the advantage of going first is parried with the advantage of going twice. To continue, you add the inverse of the whole and you get ABBABAAB (and as you reach the end of a sequence, just inverse the whole and continue on, with the next stage looking like ABBABAABBAABABBA). This sequence tends towards total fairness as n increases, so given that most games go well over 100 moves, by a game’s natural end there will be no advantage to either white or black.

Not only would this solve the problem of komi, but it would also add in some exciting intricacies for tesuji, joseki, fuseki, shape, and ko fights depending on the timing of when each player gets their double turn.

Obviously this would result in the game looking almost nothing like how we currently play (due to it impacting essentially every element of the game) but I think it would be something fun to play around with! 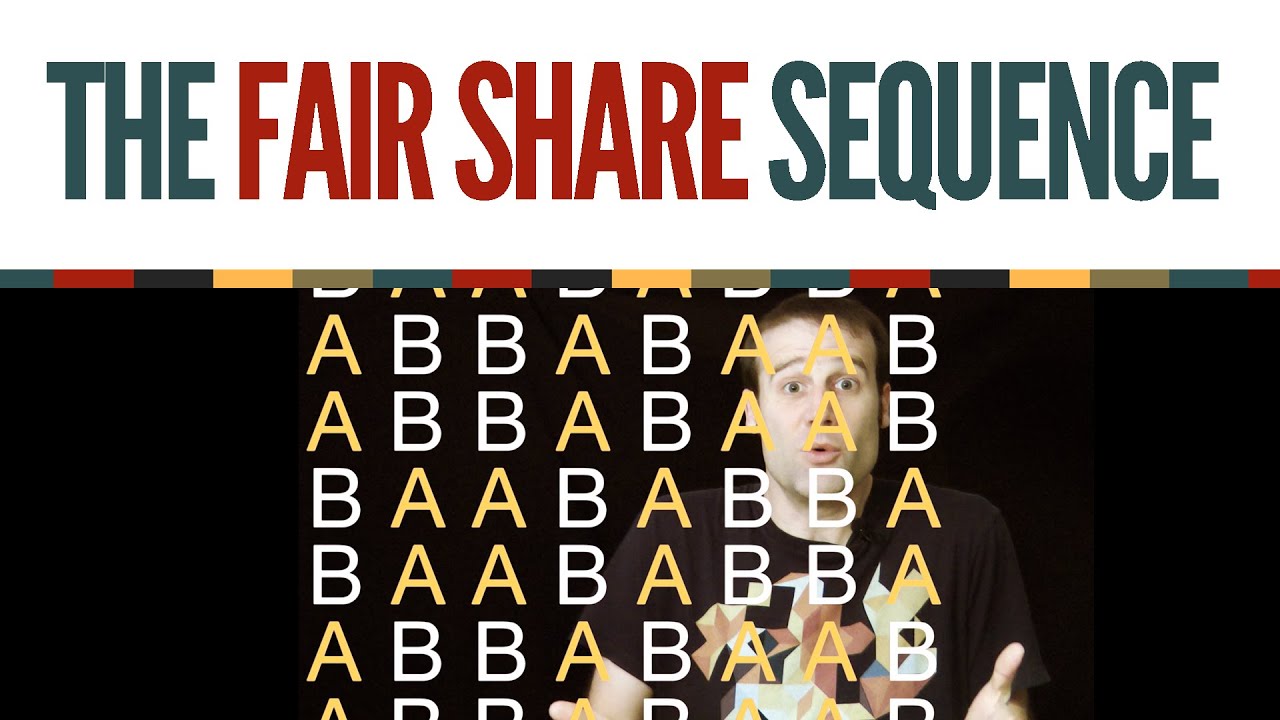 20 Likes
Thue-Morse Go Games list
Playing Cube Go (Vorlon Go) on OGS
10 moves in a row for both players - advantage for whom?
If Go Were Going To Evolve, How Would It, And Why?
Miai Counting when Tally == 0
Jigo implementation / bug not even assigned
Hunting at Night: The 1st 25x25 Tournament
Bugcat's thread guide
Go Memes! :face_with_monocle:
Longest games (# of moves) on OGS
Exploring other board games -- a challenge
Collective development of a server for variants
Kosh August 15, 2019, 7:36am #2

I think you’ve summed it up. This would be a different game.

To my mind, the best way to deal with komi is to have each side nominate komi. The person offering more takes Black against their offer. If the offers are the same. A coin toss is fair.

Yes sorry if I worded it poorly, but I envisioned this as a variant rather than a full replacement (akin to toroidal go or pair go)

Is there an easy way to identify which moves need to be passes?

I wonder how big the advantage for white is to be the fist player playing 2 stones in a row.

This sequence tends towards total fairness as n increases

Btw. are you sure the additional fairness is worth the headache we get by trying to read out a sequence, especially since for local positions the possible sequences change if we play elsewhere. 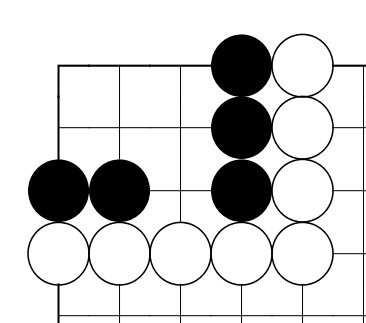 But using the ABAB method, A gets 1.25 and B gets 0.67, so it’s still either more fair or equally fair for all n > 2 where the sequences diverge.

For extra fun, one can observe that some bamboo joints can be cut and others can’t

Connect6 is basically the ABBA version of Gomoku. Works nicely.

Would be fun to try in go. Diagonal connection? Forget it? Bamboos are nice, but not necessarily connections anymore. Bulky six is killable anywhere.

Not really related to komi but more to handicap: I’ve pondered a variant of handicap that allows people to place N (extra) stones in total, but they get to decide when.

A tough choice for an N-1 ranked person. Do I accept this stone which I have to make the best use of, or do I play at N-1 and get more rank if I win, and lose less if I lose…

… and how many stones is a free-placed stone worth?

Depending on interpretation, groups may now require three eyes for life.

Oh! Cool idea… I think 2 moves meaning 2 eyes are still enough… But both would be interesting to try!

Currently, we use komi (bonus points for White) to try to resolve the inherent unfairness of the BWBWBWBWBWBW order of play, clearly favouring Black.

Correct me if I’m wrong, but from what AI numbers show and win rate of professional games, modern day komi should favour white more?

Yes, 7.5 komi for area scoring slightly favours white. My comment (obviously poorly worded, sorry) was meaning that the move order alone was advantageous to black (which is why white needs komi in the first place)

Does getting to play twice allow you to fill-in two eyes (to capture a group with only two one-point eyes), or would each move need to be legal on its own? EDIT: I overlooked that this question was already brought up and addressed above.
There are a whole host of other issues to clarify and settle in such a variant.

A Thue-Morse sequence does not make the game fair without komi. One player would still have a theoretical advantage. Depending on how you handle passing (i.e., whether A can pass his first move, giving B the first single move, followed by two moves by A, and so on, essentially swapping positions with B), you could still make a strategy-stealing argument to say that player A has the advantage.

On another note, in an effort to quantify the value of individual moves (without so fundamentally changing the game), mathematician and Professor Elwyn Berlekamp devised a go variant called Environmental Go (aka Coupon Go). Basically, in this variant, there is a stack of coupons counting down from 20 to 0.5 (in half point increments), and on a player’s turn they can choose to either take the top coupon from the stack or play a stone. The values on any coupons taken is added to the player’s score at the end of the game. This allows the players to essentially bid for komi at the beginning of the game, and also forces the players to consider the value of sente/gote at each move thereafter.

A Thue-Morse sequence does not make the game fair without komi .

Let me be more precise, since the word “fair” is somewhat vague and subjective. What I mean to say is that the Thue-Morse sequence does not necessarily remove the inherent advantage of one of the players.

This can be seen even in the simple “game” of splitting up a finite set of items (of various values), which is an example that has been used as motivation for the Thue-Morse sequence.

You might be able to argue that Thue-Morse was still a “fair” (or maybe even the “fairest”) method to divide the items in the above scenarios, however, clearly there can be an inherent advantage for one player over the other. In either case, the two people involved would argue about who should get to be player A or B, and perhaps the only “fair” way to further settle that would be a coin flip.

I love this, as a game concept, not as a way to eliminate komi. Who wants to try (in a week, when holiday is over)?

As for fairness, that is not something that translates at all. Fairness here is used as a mathematical term, and thus does not correlate to the linguistic interpretation of what “fair” means.

In fact, since go is a perfect information game without draws, there must be a winner, so it can never be made “fair” without hiding some of the information or allowing draws to happen.

I would like to try it, but I would need an easy way to know when to pass. Sadly the move-tree will be no help.

Is there an easy way to identify which moves need to be passes?

Too bad that you can’t use PASS when planning conditional moves. That would make it fairly easy to play.

Sounds cool as a variant, I’d definitely give it a try.

Here is another visualization of the move sequence (up to 1000), with double moves highlighted in red. 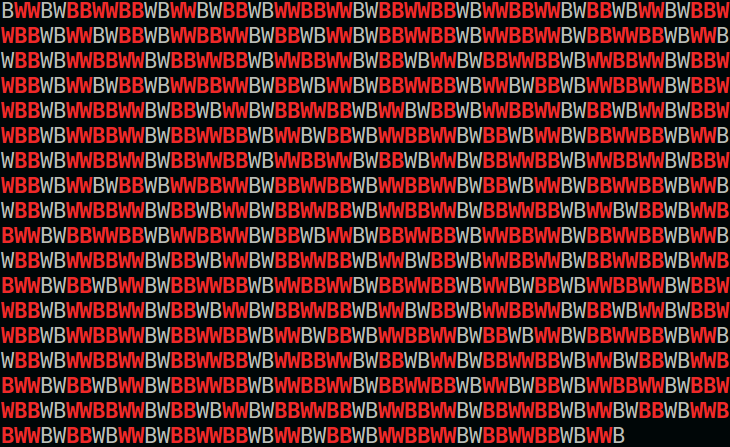 I think this move sequence would have a rather chaotic impact on the game. Not only will the double moves change life/death status, validity of tesuji/joseki/etc, the timing of any strategic move is important in relation to the chaotic sequence of double and single moves.

For example, if one were to ask “Is the L group dead?” under this variant, I think the answer might depend not only on who’s turn it is, but also precisely where in the move sequence you are.