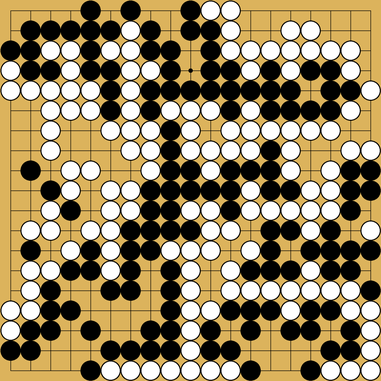 I would appreciate a review, at least for our first moves.

I played with handicap (I’m not used to it

) and I have a mixed (bad) opinion about my choices.

I’m not that much stronger than you, so a lot of my evaluation is suspect. That being said, here’s my review:

In general, I think you played well! Even if your opponent had saved the group on the side, you’d have been up by 20+ points. I think your direction of play is pretty solid, and the biggest things to work on are shape and tsumego. There were a few points in the game where your shape seemed somewhat suspect, and where a stronger opponent would have started cutting and killing your groups, and a few points where a tsumego problem sat ignored somewhere on the board.

In this game, the latter didn’t really matter since you were so far ahead, but your side, for example, got invaded and heavily reduced because you had some bad connections in your walls.

Wow. That was a very complete and very informative review, thank you very much!
That was very helpful, specially for move 30-45 and 50-60. I will study all that comments.

And you’re right about move 43 which seems ugly now you said it.
For the cut at move 20, I think I would play Q12.

Anyway, that was very instructrive !