I’m pretty disappointed with how I handled the top right at the beginning. Anyone have any tips on that, or reviews otherwise? I played black in this game.

On move 12 you need to extend to P16. The hane you played is a very common beginner mistake, so don’t feel bad about it. Just learn from this.

The white stone at R14 is what makes the hane bad. It’s an overplay that white can easily punish.

Thank you for your quick reply! So If I pincer and they jump into the corner, I should tend to try to extend to have 3 stones?

Correct. It’s such a common mistake, because it looks so similar to the 3-3 invasion without the approach first.

Don’t start worshiping joseki, but this is a pattern you do need to know. You’ll catch so many opponents at your level doing this too, once you understand what this pattern looks like.

Thanks so much! This is valuable information for me

Do you have any other comments about the game?

I think you lost a lot of points on move 88. Imagine if you played 88 on E18 instead. Now white has two groups to worry about. Letting white connect underneath makes both of his groups completely fine.

If you want to avoid this entirely, probably as far back as move 58 you could have played in the upper-left (say F8 maybe). 58 in the game looks slow. 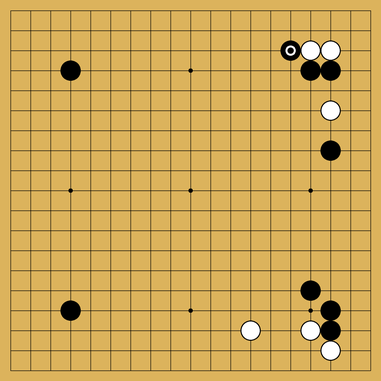 congrats on the win. white made a lot of groups and didnt have a large source of territory because of it. you played a little passive in some instances and missed chances to make life for white more difficult.
with a heroic last effort you went for influence and pulled ahead.