We could of course make a separate thread to collect the YouTube videos/streams from the KPMC if one wanted. Inseong Hwang covered USA vs Turkey just there recently The 16th KPMC(Korea Prime Minister Cup) - YouTube

It might be nice if people are interested to include some resources related to the 16th KPMC here, whether that’s streams or game links etc.

I can make this a wiki as well if people want to collect a bunch of things in the main post.

The KPMC page http://kpmc.kbaduk.or.kr/eng/ and a list of broadcasting resources for the games

Adding a flag for commentary language other than english, eg

when the commentary is in Korean.

Some other channels streaming games

tfw misinformation on our candidate’s page

The United Kingdom comprises the whole of the island of Great Britain?which contains England, Wales, Northern Ireland and Scotland.

No, no it doesn’t… Great Britain - Wikipedia

Also, look at this vintage hyphenation:

The BGA … support and run an on-line league

Due to the COVID-19 Pandemic, the very first on-line KPMC

Thanks @shinuito , I’ll watch any of the games if recorded here (but only here due to my own limitation vs YouTube etc…)

If anyone else wants to upload sgfs of the games they’re interested in or other reviews or videos they find, feel free to add them into the main post as it’s a wiki.

I’ve made a “Hide Details” section for Round 1 and would probably keep doing that for the other rounds not to make the post too long.

It seems they don’t upload the results of the prelims to the website. Perhaps later.

Btw, Argentine Go Association made a review on twitch. Luciano Salerno 2D ARG vs. Gerrit Nederveen 3D NLD | 16.a KPMC. I think, I don’t understand Spanish. Let’s see if the other go associations/federations will make a review for their representative.

It seems they don’t upload the results of the prelims to the website. Perhaps later.

The individual games don’t seem to show up in “Results” but if you click “Tournament” you can see the tables of results http://kpmc.kbaduk.or.kr/eng/tournament/list.asp

Taiwan vs Colombia ended a few hours ago. 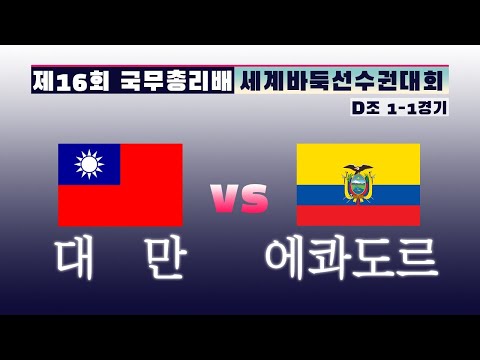 Seems like no-one else streamed today, and no-one’s streaming now.

Are any games happening right now? If not, does anyone know when they’re set to begin?

The schedule page on the website has no times.

Should I install WBaduk and go poke around? But I don’t even know where to look…

The WBaduk client doesn’t even run for me on my Windows 10.

I try to log in as a guest and I don’t get any games shown, and none of the buttons do anything. Perhaps I have to register and log in as a member.

That seems to be the same as what’s happening to a friend that downloaded it recently.

On the app I did find I had to go in and out of players and game room and things to get the games to load on the Korea servers, but the Japan and China ones normally loaded straight away.

There’s a schedule of sorts Korea Prime Miniter Cup (KPMC) but no times. It could be that each pair of players sort out their own times. I could ask about it and report back

Success! I will be streaming the UK–Austria game imminently.

How did you get it working in the end?

Note: when I log in I don’t see any games. I need to click on “Re-Join” and log in a second time, and only then I can see the games.

Stream over. The UK lost quite heavily to Austria in a shodan–shodan game.

Still no streaming by the broadcasters. I wonder when the peak time is.

Oh! The round is over.

According to the site, the next round begins on the 6th. 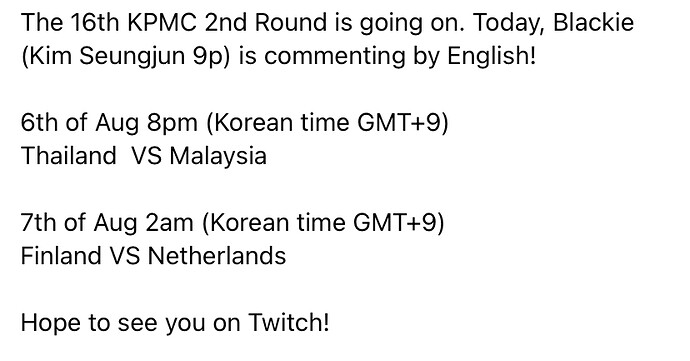 And of course the banner is already on the main site now for Russia vs Poland Twitch Kim yoonyoung twitch channel.

Already over, they played blitz. About 20m left for Ireland and 30m for Taiwan when Ireland resigned.

I’ll now be showing Hong Kong vs Slovakia unless a real broadcaster is covering it.

(Not Russia. I misascertained a flag.)