Back in April, during a long discussion about rank instability, someone brought up the fact that bots are over-ranked. I thought to chime in “I agree!”, as I’d been playing games against Fuego for practice when I didn’t have time to focus on a live game. I could beat Fuego a reasonable amount of the time, and was in the 6k-5k range at the time, about three stones weaker than the bot.

“Surely I can play 10 or so solid games against Fuego, spend a ton of time on my moves, hit 1d, and show everyone exactly how over-rated these bot players really are,” I thought to myself. “I’ll post the results once I’m done.” I created an account named CKBotTest, in order to not pollute my main account with more meaningless bot games, and set off to zoom up to 1d as fast as I could.

I didn’t get off to a great start. I lost my first game. Then I won two in a row. “The first game was a fluke! I’m headed for 1d!”, I thought to myself. Then I lost another. My second day, I won two games and lost one. “No worries,” I thought to myself. “This is just keeping me honest. I’ll get a more accurate measure of Fuego’s true strength if I can lower my rank uncertainty first.”

April came and went. I’d bounced up into the 1k range, but then a few bad days dropped me back down to 3k. Meanwhile, as my uncertainty dropped, progress became slower. Whereas a new account could gain a kyu with a single victory, the more I played the slower I progressed. May came, and saw me bouncing between 3k and 4k, for the most part. I had a vacation coming up, and wasn’t making any progress towards what had then become a goal taking up the majority of my go-playing time. “Oh well,” I thought to myself. “It’s just bad form. I’ll come back refreshed and play better.”

…And it did! Sort of. The beginning of July say my first return to 2k in a while, buoyed by a bit of rank instability, courtesy of spending a month away from the game. I slumped a bit, but built steam towards the end of the month, gaining 1k for the first time since my rank had settled, and moving within a half dozen games of a Dan-ranking.

Just like the night reachest its darkest point just before the dawn, (or so the saying goes), a lightbulb is by far the brightest at any point in its life just as its fillament shorts out. In July, I was that lightbulb. August saw the return of 4k in fairly short order. I could consistently beat Fuego, but only if I played a game where I didn’t get into (and then lose) ugly fights for large groups. Fuego is not a particularly smart bot. It plays random moves in the middle of the board, loses groups on the edge, and has an endgame that goes from “reasonable” to “worse than TPK” the moment it thinks it’s losing. However, it plays good influence moves, and doesn’t hesitate to cut everything. What this meant was that if I wasn’t really reading out sequences, I could easily find myself overwhelmed in a bad position, getting pushed around the board.

Dropping from 1k to 4k was frustrating, to say the least. However, it lead to a positive development in my study habits: I started doing tsumego on a regular basis. Losing against Fuego was frustrating, both because I don’t like losing, and because I had a feeling that the more I played, the more bad habits I’d pick up from too many bot games. “I guess Fuego isn’t as overrated as I though,” I’d come to believe. “I should just focus on real games, and on trying to improve. I’ll be able to finish this silly experiment and get this account to 1d once I’m a bit stronger, or at least a bit more consistent.”

…That would’ve been a great thing to do, but instead I kept playing games against Fuego, while also doing my Tsumego. I kept winning some games, but also losing games on a regular basis. However, my rank was creeping back up. I was finding more and more opportunities to apply my study to my games, where I would be able to read out a reasonable sequence that could save one of my groups or pick off a few stones.

Starting the second week of September, my form improved significantly. I was winning most of my games, and not getting tilted by the occasional loss. My rating crept up, from 3k to 2k. Then 1k. Finally, on Tuesday, September 18th, I made it. One last game against a 2k-rated fuego, and my rating flipped up to a Glicko rating of 2223, or 1.0d. 259 games after I’d started, I’d finally “gotten to 1 Dan”. The easy way. https://online-go.com/user/view/529165

I’m definitely not a 1d player, but getting the rating, even on an alt account where I played nothing but Fuego, was a fun, if tiring and sometimes frustrating, experience. Based on my experience, I think Fuego is probably over-rated by three or four stones, but does an admirable job of punishing mistakes. It also has some of the most frustrating endgame habits I’ve ever encountered. The bot never resigns, and plays dozens of moves inside its own territory at the end of any game it’s lost. I’m definitely looking forward to mostly playing human opposition, again, and doing my best to apply the stable, solid shapes that Fuego taught me to play, while trying my best to avoid the bad habits I’m sure I’ve picked up at the same time.

1d the hard way? Let see how this goes!

Looks like main problem was losses in the very beginning. Fresh account has deviation of 350 and I assume it’s basically impossible to get such a high deviation back. Maybe if you had a winning streak from game 1, you could get much better results.

Edit: how did you manage not to get bored? I played Fuego few times and it’s really easy to get bored, lose focus and mess up life and death or something like that.

Starting a new account after a bad start, or any major slip, would definitely be the quickest way to get to 1d. Fuego fluctuates in rank, and I don’t imagine it would take more than a handful of wins to get up to 1d if you were playing it when it was rated 3k or higher. I thought that’d kinda be cheating, though. If I’m losing regularly against Fuego, even if it’s because I’m not reading well, or because I’m getting bored and missing L&D, then that’s a representation of my strength.

And yes, doing this was pretty boring at times, especially as Fuego uses an opening book, so playing the same moves against it in thew opening results in playing out the first dozen moves or so the exact same way. Responding with 4-4’s as white will always lead to Kobayashi. However, I figured it was teaching me to play solidly, so I’d improve by carrying out the experiment to its end, rather than giving up early. I do the same thing against human opponents, namely playing to fast, not focusing, and messing up my L&D, so practicing not doing that against a bot would help me improve all around. I’m also pretty stubborn, and didn’t want to walk away defeated in my challenge against Fuego

I had an old alt-account to mess around with relatively few games on it (and high deviation). So I decided to complete this “Fuego challenge”.
Method totally works! After only 8 games I have 1d next to account’s name: https://online-go.com/player/440644/
One can also give Fuego handicap to make wins earn more points.

Another easy way: rake up a big winning streak. Since in handicap games white has an advantage and handicap is capped at 9 stones even “fair” handicap is easier for stronger player. Generally, playing weaker players and winning helps. Basically, I got to 1d by getting into a handicap tournament where I’m the strongest player.

The advantage of this method is that it doesn’t look as suspicious as playing bots.

Of course, I got a bunch of games I’m still playing but I’m pretty sure if I resign and win them strategically I could retain the rank, it’s just to much effort to do so.

Thus, I’ll leave the picture here so I can look at it in the time of need. 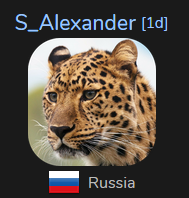 Basically, I got to 1d by getting into a handicap tournament where I’m the strongest player.