For me one of the best parts of participating in IRL tournaments is that the games are not played in isolation:

While playing, you may get up from the board and look at some of your friends games. After each game, you can review the game with your opponent and interested spectators. And even if you aren’t sitting down at the board (maybe you have to rush to go get lunch before the next round starts, because you were the last board playing as per usual

) just a quick “who did you play in the last round, how did it go?” is often exchanged.

To keep some of that experience in the e-Go congress, I thought it would be fun if people wanted to share some of their games in this thread. So, if you’ve played a game that you’re proud of, or where something interesting or funny happened, please link to it and write a few words about it!

I’ll start off with some video reviews I made of my own games from the Open tournament:

I lost this game psychologically. During the midgame I felt I fell behind, and I became discouraged and frustrated. If I knew the result might be by only 1.5 I would have fought with renewed determination. Because it was so close, there’s probably about a hundred moves that could have been just a little better. So I think I lost in the endgame mainly, but I also got a bad start in two corners, so I need to study joseki a bit, too.

Anybody have any endgame corrections for me (white)? Thanks!

Great game, so close! It looks like white still has a chance right at the end, by playing A12 instead of N14 at move 219. If black blocks at A11, white can return to N14, and since white has slightly more ko threats white can win the ko on the left, which is enough to reverse the game.

At move 14, the hane at C5 is a common mistake. This is a joseki when black doesn’t already have the F3 stone, but with that stone black can cut and capture that hane like happened in the game. This is not a huge mistake, white is only a few points behind, but it comes up often so it’s worth to learn both white’s right move (just extend instead of hane) and the black punishment (like in the game).

After the result in that corner, the vital point at E5 was sente for both for many moves. You did get it in the end, but if black had played it first you would be forced to respond and then your shape is quite a bit worse. So play it as soon as possible!

Also, on a more complicated note, KataGo is suggesting a cool tesuji that I haven’t seen before in that corner: 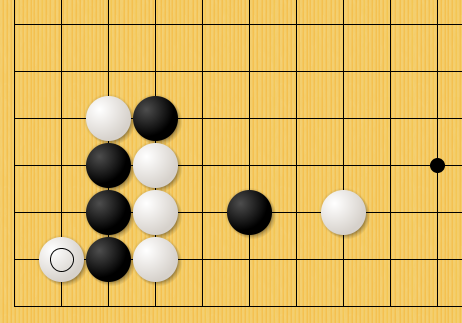 Ahh, that is an interesting joseki there, thank you!

For completeness, here is my game from the final round: