Oh now I see what you mean … I was looking at the rank table. So … mine are like yours and Koba’s is indeed a mystery!

Ah i have the ranks&ratings hidden as default, so they always appear white when i click “show ratings” on somebodys profile.

ooooooooooooh haha thanks that makes sense

Ah so clicking the “show ratings” makes them 6kyus instead questionmarks?

Yes, can confirm when you turn on “hide ranks and ratings” and then click “show” on profile page I can reproduce this bug

So… If you hide ranks, your opponent’s humble ranks become bragging ranks - at the top of the uncertainty rather than the bottom? Does hiding ranks reverse polarity somehow?

Also - is there a link to What happened to tournaments.players.ranking? - #25 by Lys

at the top of the uncertainty rather than the bottom?

Nah, just back to the middle like a normal rank. It must be bypassing humble somehow… Top of uncertainty would be about 1k

Yes, I have read anoek’s posting about three times since it was first posted. I waited quite a while before I put in my opinion, since opinions can change. Mine has not.

The part about making 1 dan a correct rating relative to other systems is fine. However, assigning all the other corrections according to a fixed criterion seems incorrect to me, and I would have believed it if he or she showed evidence that a 25 kyu rating under the new OGS system truly corresponds to 25 kyu in AGA. I think it strange that all the postings in response to mine ignore my very sensible suggestion to make several comparisons across the Kyu range.

I’m sure it it true that players from other environments found OGS’s ratings wrong. I’m sure that an adjustment was needed. But an adjustment that pays attention only to the Dan levels and mostly ignores us Kyu players doesn’t make sense to me. OGS should be a welcoming and fair environment even for lowly beginners. This is the price OGS should pay for being such an easy to use site compared to some (all?) of the others. And yes, all of this is my opinion, not fact. That doesn’t mean it is right or wrong. Testing (evidence) is needed.

Seems like my “as brief as possible” explanation is not cutting it, so here’s a longer reply.

I would have believed it if he or she showed evidence that a 25 kyu rating under the new OGS system truly corresponds to 25 kyu in AGA.

But an adjustment that pays attention only to the Dan levels and mostly ignores us Kyu players doesn’t make sense to me.

If you had truly read and understood anoek’s post, you would not think that kyu players are ignored. All ranks are adjusted based on testing, since they are based on previously played handicap games on OGS. With this, the relative distance between player A and player B is based on how much handicap stones they need to play a game with fair win chance for both. This number of handicap stones is then the difference in their rank.

Then, once these distances between ranks have been established, the next thing to do is to decide what to call the ranks. Is player A 10k, player B 5k? Or is player A 1d, player B 6d? Or is player A 20k, player B 15k? To make this rather arbitrary choice, anoek has opted for putting players around the 1d rank as close as possible to AGA and EGF ranks, which mostly solves the problem that OGS dan ranks were very tough to reach.

I believe I saw somewhere that either the EGF or the AGA are also working on an improved ranking system that distributes kyu ranks more fairly based on the handicap system, since handicap is now too strong to really align with the difference in ranks.

I do understand the principle that a handicap stone should be equal to the difference in the player’s rank. But I’m seeing the players who used to be 14k now being 9k, which is a very large change, particularly for 9x9, where each stone played has a far greater effect on the game than with 19x19 (surely OGS gives separate rankings for each major size of board?).

I guess I’m missing some important basic point. If OGS rankings don’t work, perhaps the problem goes back to deriving the ranking from an underlying point system (which I don’t understand).

I’m willing to let these issues go if everyone else is so sure I’m wrong, which they are. I’ll just shut up and hope that I really can claim I’m 9k when I play outside of OGS, although I’m absolutely certain I will be far worse than that when I play my next 19x19 game, either inside or outside of OGS just due to the fact that I have played only (“only” is an excellent approximation) 9x9 games for many, many years.

Today I compared rankings on feb 1st with today’s rankings for 2233 players participating in “Through the years, long correspndence” tournament.

Old data are retrieved via V1 API while new data come from termination-api.
I’m sorry I didn’t gather rating instead of ranking. Ranking seemed to be more straightforward for my purposes (avoiding one calculation) but, as it seems, there’s a glitch involving some users who are wrongly ranked 30 (1d).
Anyway, if you ignore that weird thread of dots on value 30, here you can see New rankings compared to Old rankings. 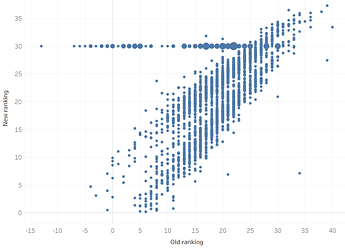 It looks like there are two distinct diagonal stripes, doesn’t it?
I coloured them based on difference “new - old” so that increases are blue and decreases are orange. 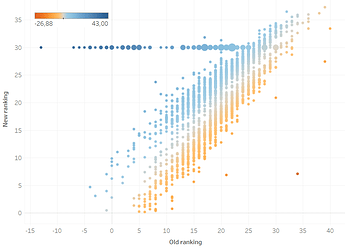 Dot size is the number of players in that dot. Range is from 1 to 9.

particularly for 9x9, where each stone played has a far greater effect on the game than with 19x19 (surely OGS gives separate rankings for each major size of board?).

For 9x9, a rank difference does not correspond directly with 1 stone handicap. But this is an entirely different problem. The difference in ranks currently is based on handicap stones on 19x19, but our handicap system should give an automatic handicap that is fair for 9x9 as well, using (reverse) komi.

I guess I’m just not understanding why only the 1d point was chosen to be equal to rankings from other sources.

I find it hard to believe this can be true.

It’s not totally uncorrelated: weaker players are still weaker players here. It’s just that we squished the ranks a bit compared to AGA / EGF, so that handicap games are more fair, based on data from actual handicap games. It might not be intuitive at first, but it should be fairer with the overall idea that 1 rank difference equals 1 handicap stone in 19x19 (which is commonly used in tournaments everywhere)

Also, short note about this: there is no problem claiming you’re 9k on OGS. Claiming that you’re 9k in the AGA, or in Japan, or on Tygem, or on WBaduk, they all mean different things.

Ya better believe it son! (Or perform some analysis on the AGA data set that shows it is more “correct” than OGS)

Thanks, that’s the analogy I was searching for!

perfect comparison!!!
[also, just to piss of Fahrenheit-ians… who would choose such a scale?!

Oh but they are! Or rather, all ranking systems are somehow both correct and incorrect in their own way ^___^

Like gennan posted earlier this thread, EGF is in the process of updating its ranking system too. According the graph in post 59, it seems like EGF and OGS ranks should align really well in kyu-ranges after their update, so maybe it’s the AGA which should be updated next xD