Summary of the update:

One major focus on this improvement was to align ourselves in some way with the AGA and EGF. Generally speaking, an EGF rank is about 1.5 stones stronger than the equivalent AGA rank, so we aimed in the middle, targeting a spot inbetween in the 1d - 3d range. So, if you’re within that range on OGS, you should be within about a stone or so in either organization.

However our SDK and DDK, and high dan ranks, diverge a bit more from both organizations. Generally speaking you will have a higher rank on OGS than either organization in the low SDK and DDK ranks. We feel this is justified and more correct for us given the handicap win rate analysis for both games here and at the organizations.

Now mind you, I tested this code once upon a time and it was correct once upon a time. However, at some point I accidentally deleted a character (which is sort of easy with my editor of choice, vim) and because nothing exploded and generally speaking, looking at one game change, the results aren’t that crazy, I didn’t notice it. For years. That bug had been with us since we introduced Glicko2.

Instead of noticing this, I unknowingly compensated for it by implementing fancy windowing systems, first the 15 game window system, later a sliding window system. These systems helped combat the volatility bug to produce results that seemed reasonable, and by and large worked out. However, as it turns out, without that bug, dropping windowing all together produces really good results too (better than bugged window versions) and is a lot more intuitive. Bugless windowed versions work well too, but there’s some drawbacks, especially with things like sliding windows, where sometimes you win and your rating goes down, or vice versa. They also have a tendency to vault players up or down in ranks when you have win or loss streaks, which can be problematic with auto-matching. So, now that that volatility thing is fixed, we’re ditching windowed ratings all together and I think folks will be pleased with the results, and in general the system should be much more intuitive.

For fun, here’s some before/after screenshots that highlights the effect of the volatility bug:

Along with aligning our low dan ranks, we want our ranks to be as useful as possible. One rank difference should equate to being a one stone handicap difference on a 19x19 board, regardless of what rank you are, or the rank difference. While our old rating to rank formula achieved this for a decent percentage of the population, it was not adequate in the lower ranks, and instead placed a notable percentage of our population into a perpetual 25k rank. So, we ran a whole lot of simulations with our entire game history to came up with a better mapping that aligned our ranks well, gets rid of the 25k problem, and produces fairly consistent handicap win rates across the board.

The key things to note in this data are:

(note, gray areas are where we don’t have enough data for anything meaningful, the cutoff here was a somewhat arbitrary 100 games) 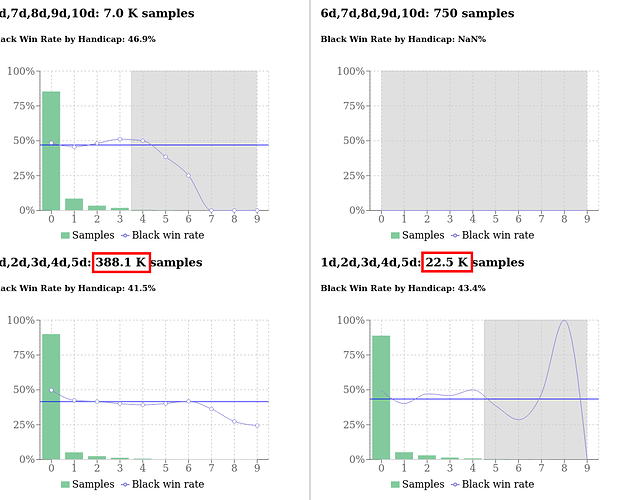 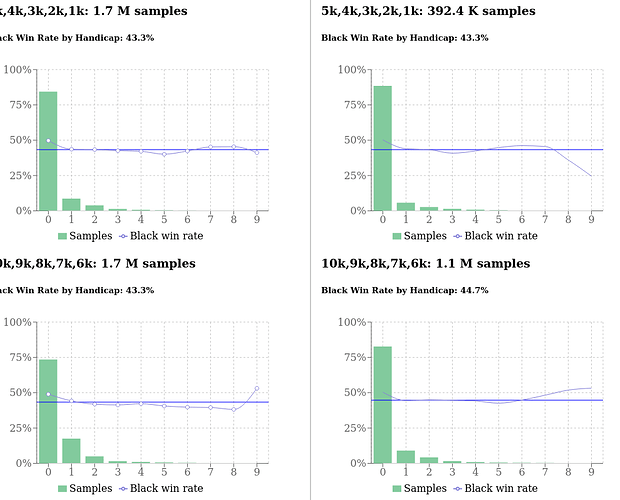 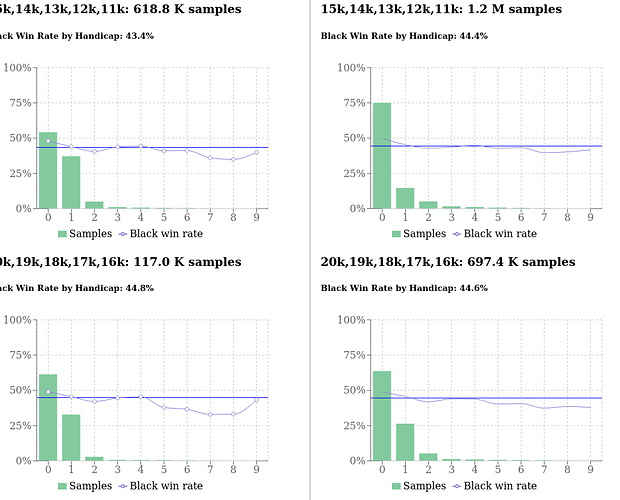 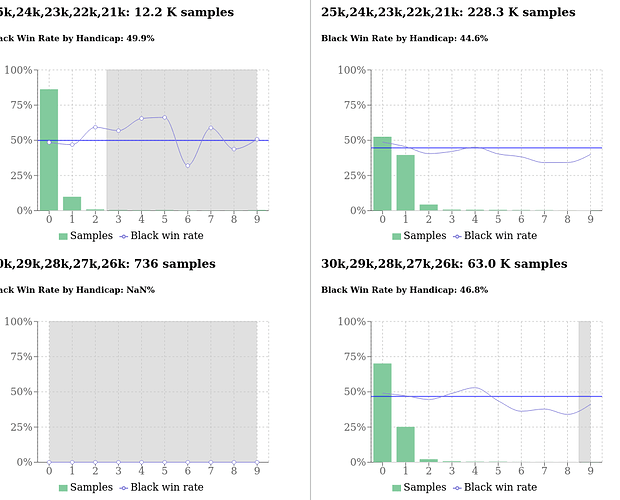 It’s been a known issue that you can’t really compare the different ratings on your profile. Your overall rating had pretty much nothing to do with your live 13x13 rating for instance. This is because they were computed using completely independent rating pools.

@flovo came up with the great idea of using your opponents overall rating when updating a sub-rating, this has the effect of the rating pools converging into the same scale as the overall rating pool, so the individual ratings should be somewhat comparable now.

112 Likes
So, did everyone rating go up?
About the levels
Incredibly High Ranking That's Inaccurate
Rating system issues
Did anyone's rank / rating jump recently?
Ranks suddenly moving up. Bug or feature?
Hypothesis - Tips: The Main Difference Between TPK--DDK--SDK--Dan
Do OGS Ratings compare to Others?
Why does "restrict rank" allow ? players?
My rank increased without even playing
Huge disparity between the probability of a 1dan defeating a 1kyu between the OGS and AGA ranking systems
The rating system and me
Make "analysis disabled" the default (poll) - COMING SOON!
My opponent left, I waited 29 min
How automatic handicap is calculated?
My rating is suddenly wrong
Average rating
Rankings explanation?
A separate ranking pool for children?
Rating walls for ranks
Ranking in Go and its chess counterpart
Ranking in Go and its chess counterpart
Is the OGS team aware of this?
Why is the overall rank higher than the only other rank I have?
AGA/OGS rank difference?
AGA/OGS rank difference?
Western Dan Challenge 2022
Stronger dan players on OGS?
Problem with handicap in tournaments
How Long Does It Take Ordinary People To "Get Good" At Go?
anoek pinned globally January 26, 2021, 10:11pm #2
DVbS78rkR7NVe January 26, 2021, 10:14pm #3

my editor of choice, vim

Thanks for the great job!!!

Exciting. Thanks for the all the work on this and other OGS dev. (But maybe use VS Code?

One thing that’s always confused me is the ranks by size and game length. I have only ever played 19x19 correspondence and yet my rank is different in different categories. Does that change/simplify with this update?

Thanks for informing us so thoroughly.

Thanks for the great job!!!

I have only ever played 19x19 correspondence and yet my rank is different in different categories. Does that change/simplify with this update?

There will still be some variation, but they should converge to be more reasonable

Big thanks to @anoek and @flovo for all the hard work!

Thanks for the detailed and interesting update, sounds like this will be a big improvement. Will the whole rating history be updated for each player or will there be a discontinuity?

Will the whole rating history be updated for each player

Yep the updates are retroactive

Thank you so much! Such great news that the volatility bug was found and fixed. Also respect for being forward about the cause of the bug.

Hi! Could you please explain how the numerical rank calculated from your logarithmic formula convert to kyu / dan numbers? I have a rating of 2558, which translates to 36.66 in new ranking, where does that put me at? Thanks!

Im just curious, but how did you came up with these values? By ‘try and error’, or was there some other reason for using these?

Looks like we are going to have lots more Dan level players after this adjustment.

Since you’re asking for feedback to align with AGA/EGF, but I’d imagine there hasn’t been much in terms of rated games in the AGA (or maybe there are and I just haven’t figured out how to do them

), how would you like us to fill this out? I’d imagine best guesses, but I personally (and I’d imagine I’m not the only one) self-promote based upon my success on OGS, so I could put in my last tournament rank, but it’s been a while and might have been considered a bit suspect when I had it.