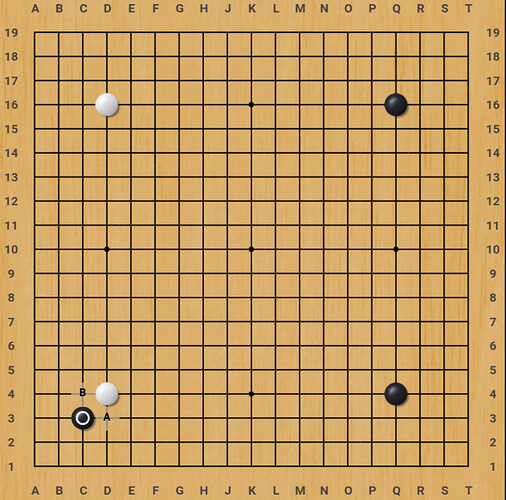 Is A or B the “correct” response? I’m rather confused! Does it matter?

A quick test with KataGo tells me it doesn’t matter.

So then I’ll wonder how near the other stones need to be for it to make a difference. My confusion is around three various advice I’ve seen about blocking on the wide side or the side with most development potential or probably other things.

D16 is too far to make a difference.
If you had a stone around D10, then B definitely.

Dwyrin says: a wall facing nothing is useless.
I can’t tell the difference between D9, D10 and D11 though

I would prefer as White to play B and start building a white wall and jump to C8 or D8.
Black can play C12/13 or D12/13 and live, but White can put some pressure on Black from the top or extending from the White left bottom group.
Playing A builds a wall facing a Black corner. Doesn’t feel right.
Just my two cents.

Basically its matter of style.

All 3 options are still rather vague, and on move 5 its too early to make full-board plans, so it doesnt matter that much.

When the baord is this empty, stones on d16 and q4 barely matter for the wall w is getting. I feel like moves for large extension around d10/k4 are way more important than the 4-4 stones for deciding which direction to block. Maybe if there would be few more stones on the board, it would be easier to say which would be more impotrant between d10 and k4, but here its kinda the same.

So the answer appears to be A.

I would not interpret those results to mean that pros played incorrectly 58 times.

Oh, I just wanted to present the Waltheri findings in a slightly provocative way :D

I believe the two are essentially equal.

According to KataGo, the stone must be at least this close to make a difference. Here, KataGo favors B by about 1/3 of a point. I think it’s because the stone functions as a pincer if Black tries to nullify the wall’s influence. And as you move the white stone even closer, the difference gets bigger. 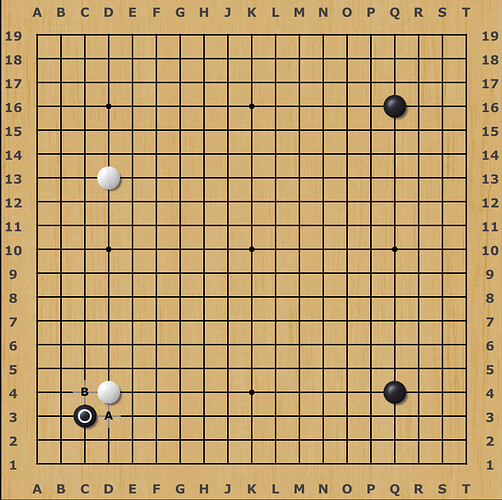 So if you’re still hearing that old wisdom

I think it’s more that the old wisdom is still rattling round in my old head!

Tenuki if you just wanna treat that corner like you’d be shoulderhitting 3-3 stone, its still normal joseki if w tenukis.

I can’t believe I’ve never thought of this response! It seems obvious now that you mention it.

Hey its totally valid option! Follow-up move there is really big, but its not like that 3-3 invasion is actually threatening the life of of 4-4 stone ^^

A quick test with KataGo tells me it doesn’t matter.

So the answer appears to be A.

I think another possible way to interpret such data is that both A or B can still flexibly lead to many options. Perhaps A and B are both playable, however, maybe the best followups after each might lead to very different games.

Another more fine grained way to pose this type of question is how the choice between A and B would affect the desirability of certain follow-ups.

For example, if one wants to play a particular joseki, would it be better to start with A or B? 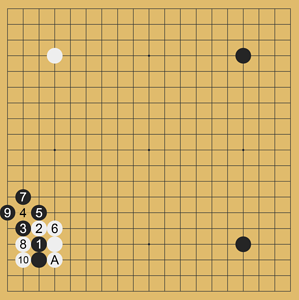 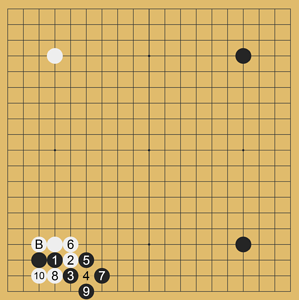 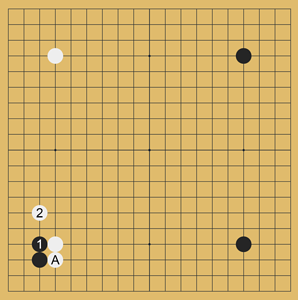 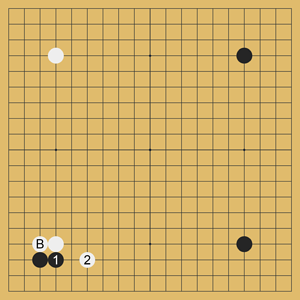 The second variation looks like an identifiable mistake. That ponnuki is well-positioned.

No professional games have gone into that line.

This is really revealing my inability to think through possible or likely sequences in my decision making. I feel a new year’s resolution coming on…

w dictates how glack responds since this is a small mia for b .either way b makes territory and w gets influence. Also b maintains sente and the corner. The 3-3 is a game winner for b but w also get to play and they like to win too.