It feels like in all of the go commentary videos I watch, “this is an exception where the ponnuki is not worth 30 points”. But I’m not sure if I’ve ever seen an example that was not an exception…

So this thread is for posting examples of ponnukis that really were worth 30 (ish) points. 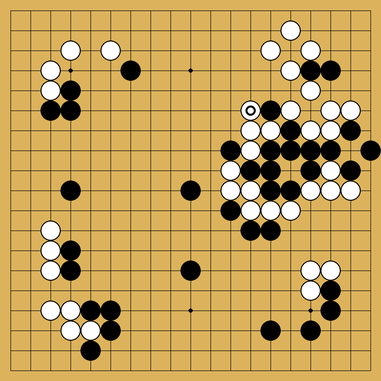 Maybe the first one here?

Edit: Note that there is also a ponnuki worth -1 in gote in that game

I played in an irl tourney where the winner played a game where he gave up a 15 stone group for a ponnuki and went on to win so I supposed he (~5d) judged it worth the 30 points (or more I guess) but I don’t have a record.

You probably don’t see them much because if they are that good the opponent won’t allow it.

Doesn’t it depend on what kind of ponnuki it is?
A open space ponnuki - somewhere in the middle of a moyo with not too many enemy stones nearby - seems to me big, where as a small space confined ponnuki - close to enemy stones in a ‘small’ space - can be tolerated.

[Pandanet - 14 kyu (Go4TheEyes) vs. 13kyu - May 5, 2021 (Win 8.5pts) - Invasion & Counter-Invasion #8] In this game, Black (Go4TheEyes) got into a spot of bother on the left side, resulting in him making sequential atari to try to retain centre access. At this point, White should’ve extended to A, leaving Black to fix at B, after which White might want to enclose at G3. [image] However, he actually played the mistaken atari C, provoking Black to capture at A and form a gorgeous p…

May as well link 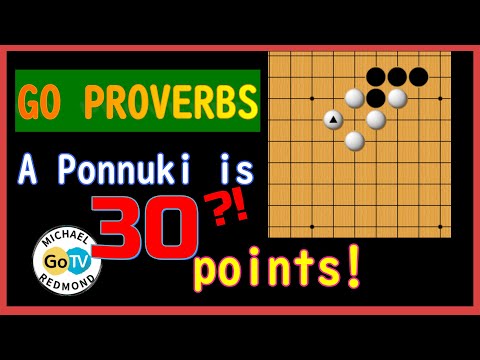