I just played an opponent who used a joseki I’d not encountered before and I played rather poorly. However, when I went back to see what I did wrong even the correct sequence seems to give me a poor result.

I’m white, and here’s what would have happened if I had played correctly. 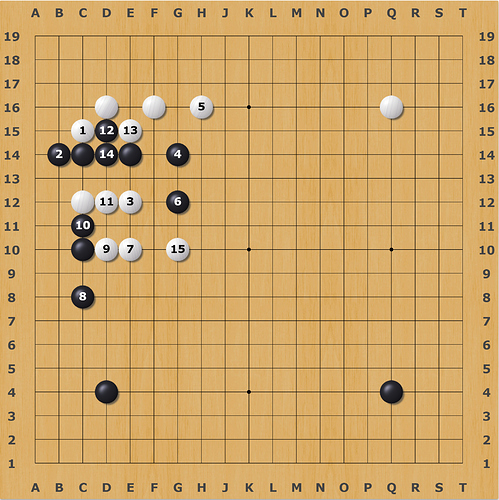 Yes white got a big corner, but black got a lot of potential in the lower left, which he can solidify by attacking white’s eyeless group…or at least, that’s basically what happened in my game. (After black grabs an eye in the corner or links up)

So was the real problem pincering in the first place when black has a stone in the opposite corner, or is this result perfectly playable and I just need to work on the rest of my game?

here’s what would have happened if I had played correctly

Where did you get that sequence from? I am trying to understand what makes you think it is the correct one.

I wouldn’t call it a problem, I just think black’s counter-pincer at C10 was well played as it works well with the D4 stone.
Alphago answers C14 at F17, so I guess F17 should be considered the best reply.

I got it from josekipedia…after black counter pincers with c10, most of the sequences went something like this. I was expecting d11, but I guess that would result in roughly the same issue, which is I have influence and nothing to do with it…

I got it from josekipedia

Could you post a permalink then? I don’t see it. There’s a sequence in josekipedia where 9 is played at C11, and that makes a big difference because it prevents the two black groups from connecting (B12 in your sequence):
http://josekipedia.com/#path:pdqfqhofndqjqerfohmfldmhojqlqipjoipeoepfmjqdqcrdpc

Black still has a weakness at F13, so that should help the floating white group.

Sure, black has a lot of potential, but white still has several options at C3 and on the lower side to erode it.

Again, Alphago tells us that the correct answer to C14 is F17. So I guess the pincer loses a few points.

You are right, I transposed the two plays. This is what it should look like… 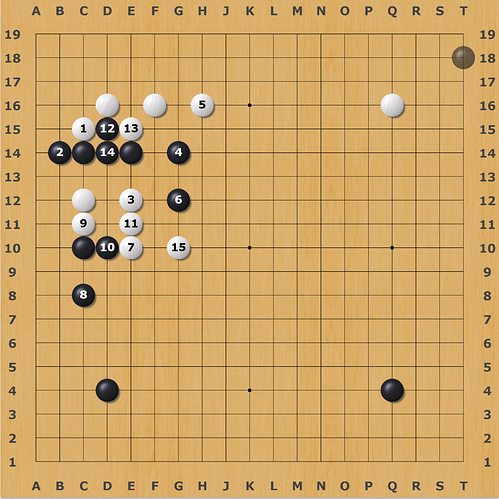 which means it’s a lot more even than my original post. My actual game was much worse than this. This wouldn’t have been near as bad…or maybe I will play F17 next time :). Thanks for the help.

I don’t think so.
The truth is, I couldn’t find any example of a C14 approach against AlphaGo Zero (black approaches to expand its moyo). Usually black would approach from the other side, and then AlphaGo Zero would reply with a pincer, or tenuki if played later in the game. btw those are also the natural moves in human games.

[edit] My mistake, there are actually several cases of tenuki when AlphaGo Zero plays itself. This is towards the end of the training phase.