And I merely meant to say that I have all the same questions and then some.

This seems like a good starting point. It might be easier to categorize joseki as “generally AI approved” and “situationally AI approved” with reference to specific situations in which the AI’s choice of joseki depends heavily on the board state.

Variations that heavily depend on ladders may still be a problem though, right?

I suppose that OJE variations involving ladders are already marked as such?

But it would still be good/neccessary to verify ladder (in)dependency when corroborating OJE content with AI, at least ladders that are made/broken by a 4-4 stone in the diagonally opposite corner, and perhaps even a 6-4 stone if that is already known to (or accidentally found to) affect that particular variation.

and what standard 19x position should be used as a reference for what bots like?

My practice is to download 5-8 pro games where the joseki that Kata disapproves of appears or can be chosen and see if KataGo is consistent with it’s dislike of the human pattern.

This is where I am leaning. The thing is that with most joseki, it isn’t needed.
There are not a lot of exceptions where there are 3-4 point mistakes in popular human patterns.

Only super outdated(and offbeat 5-4) joseki, trick plays, and traditional joseki mistake refutations really need regular treatment and I think it can be handled with a new label and group discussion rather than hard and fast rules like trying to find a “standard 19x19 position” to judge from or an exact point value of things to call mistakes or AI variations to include as refutations.

Basically, this should be a rare enough circumstance that it should be case-by-case and involve a discussion.

I collected every pro game from Fox in 2020. It isn’t a source that I use for OJE contribution but it could be helpful in this circumstance to show how professionals were playing this joseki post-AI. 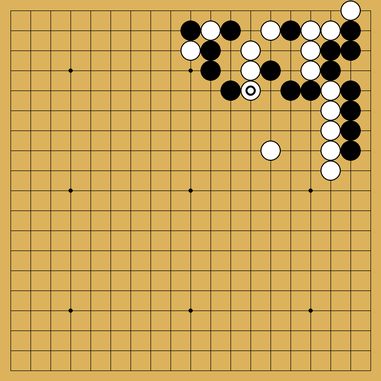 Edit: OGS adds lables everywhere, download it into your own SGF editor and it is cleaner.

Although there are newer influences (AI, some newer books, weiqitv, streamers, people thinking for themselves watching modern pro games), I think what could be called the western go cannon is still heavily influenced by Japanese Go books from the 70s-90s, and therefore what member of that community think and teach as joseki is very different to what modern pros think of joseki. Here’s a pretty dead joseki in pro play than I still often see on go servers Play Go at online-go.com! | OGS.

Are there any sources on Joseki as comprehensive as the older Japanese books but covering the new meta? I think the undue influence is in part caused by a lack of good alternatives. There’s also a time-delay to the spread of innovation, especially in the such a niche community. If I learn nice reliable Joseki from some grey beard who read it in a book in the 80s, I can’t be blamed for teaching to a newer player at my Go club.

Although OJE is a great feature, I find it harder to learn new Joseki from it than from completely outdated Go books because the outdated Go books have a decent amount of commentary and explanations to go with the variations. Better to have a rusty sword you know how to swing than a F22 that you just end up crashing.

To my knowledge, you need to carry your rusty sword in the F22 as there is not yet what you’re hoping for.
To handle the F22 better a book was mentioned here Books for influence playing - #12 by shinuito but no feedback on it yet.

Good to know the name: Catenaccio joseki at Sensei's Library