In this recent game of mine, we played a 5-4 joseki in the upper left: Ladder Challenge: SpaceInvader(#19) vs gennan(#12)
See the corresponding joseki in the OJE here: Play Go at online-go.com! | OGS

Up to this point, there were only a few (what I would call) inaccuracies by black: 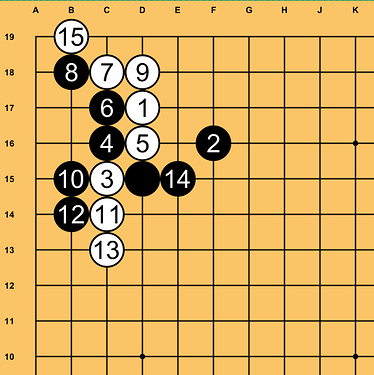 Those evaluations didn’t surprise me (I know AI don’t really like 5-4).

But in the continuation: 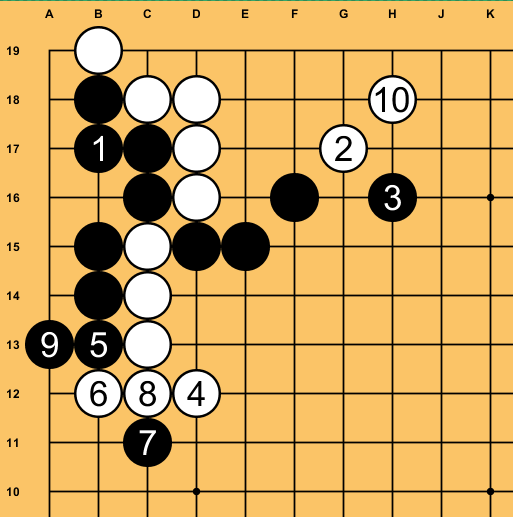 … I was quite surprised to see 6(!) moves in the (supposedly) joseki continuation that lost more than ~2.5 points, according to the level IV AI game review.
At my level (3d) I would qualify score losses of that size as fairly significant mistakes (not just inaccuracies), that basically disqualify this continuation from earning the joseki label.

I know that the OJE policy is to basically ignore AI variations and evaluations, unless corroborated by pro games and/or pro analysis.
But I feel that this policy is a bit problematic for variations like these, marking them as joseki while AI shoot numerous holes in it.
In particular, black’s E18 tesuji isn’t discussed in the OJE, nor does it appear in Waltheri’s. Maybe pro analysis of this variation has been a bit too shallow and we should include new AI insights to the OJE? After all, this variation hasn’t appeared in pro games for 20 years, so this joseki is basically dead and pros won’t be investigating it anymore and mistakes will never be fixed under the current OJE policy.

About this particular case, now that I see the AI critique, I have some vague recollection of being shown black’s E18 tesuji in the past, so maybe strong amateurs and pros know about it, but sources for this are just too hard to find for the OJE composers?

I believe the “joseki” in question is a variation that requires certain circumstances to be feasible for the side with the 5-4. It is not a joseki that yields an even result in most positions. Most of the time the hane on the outside is superior … 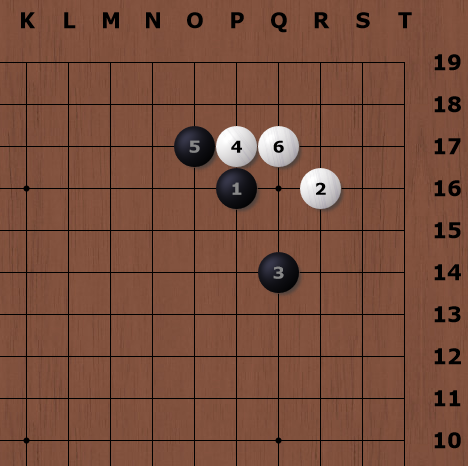 … and even before that, black should probably attach in the corner at 3-3 in most cases. Of course it is fine to go for these variations if your style is to play for influence.

The inside hane can be a powerful weapon if the side with 5-4 has reinforcements nearby. However it is rather easy to dodge these cases, for example by invading at 3-3 instead. I guess the joseki in question is rather outdated due to these and similar reasons.

Yes, I don’t have any issue with the OJE presentation and AI evaluations of my 1st diagram. I know some of those moves are situational at best and not quite optimal according to AI.

My issues are with the moves in my 2nd diagram and the sizes of the associated score losses in a continuation that is presented as basically a one-way street by the OJE.

Probably the variation should be marked as outdated and / or situational.

If you study the continuations after the insight hane, I would be interested in your insights. Sadly I must say that I’m not motivated to put in the work myself.

We all agree that black’s inside hane is probably somewhat dubious or at least situational, but the OJE does state that it (C) may be a bit unsound, so I’m fine with that:

Up to this point, everything is fine. Still no issues from me.

But from there on, the one-way street continuation shown by the OJE seems to become quite dubious according to AI. If AI stuff is not allowed in the OJE, perhaps the OJE should stop at the point above (white S19), or at least note that everything after is outdated and perhaps dubious, instead of continueing and calling the following result “joseki”:

It should definitely be changed. I was aware that this line had a lot of questionable moves but did not want to editorialize it at that point in the OJE developmen.

It Is easily one of the worst human joseki.

I would do something like this Play Go at online-go.com! | OGS for the first big mistake. That is the only other joseki I have treated this way without professional corroboration.

If you study the continuations after the insight hane, I would be interested in your insights.

I studied joseki most actively in the early 90s, using Ishida’s Joseki Dictionary, dating from the 70s. The inside hane did appear quite often in my games back then (played by me or my opponent), although move 10 in my 2nd diagram would usually be played at F17/O17 (I think that had to do with the E18/P18 tesuji), which can still be found in Josekipedia: 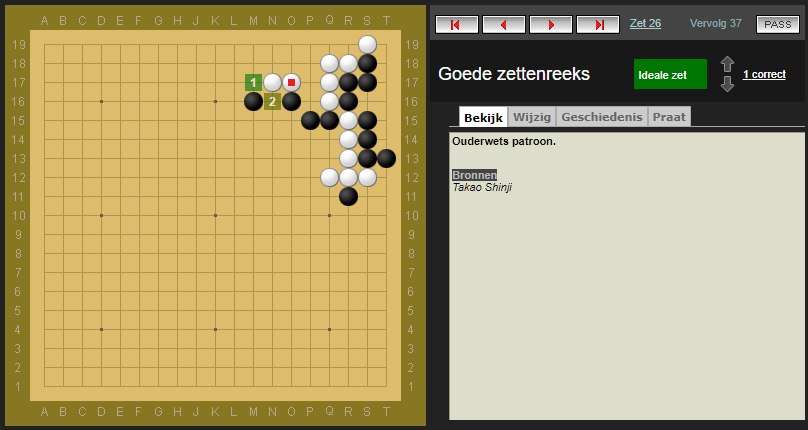 Sadly I must say that I’m not motivated to put in the work myself.

AFAIK, AI variations (uncorroberrated by pros) are not welcome in the OJE, so I suppose those should be kept out of the OJE.

But if the OJE aims to be a reliable source of joseki knowlegde, I think it should at least label branches like these as outdated/dubious when AI refutations come to light.

But if the OJE aims to be a reliable source of joseki knowlegde, I think it should at least label branches like these as outdated/dubious when AI refutations come to light

I agree. I just think that the process of labeling and editing should involve this kind of discourse that you have started rather than one editor with an AI open making a decision (no matter how easy it may seem, in this case)

Joseki are common sequences, not necessarily “correct” and certainly not under any and all circumstances. Unless you have an impeccable understanding of the entire board situation, you will never be able to choose the ‘proper’ joseki.

These sequences make sense and prevent you from losing immediately (by trading something of value for no compensation at all). Viable returns on investment in human games are things like “my group is settled”, “my opponent’s group is not settled”, “I gained influence here”, “I negated my opponent’s influence there”, etc.

A compromise would be to add Kata’s moves in a different color, which would… save people the hassle of having to recreate that position to check it with their own version. I, for one, prefer the KJD way of doing things: lots of actual commentary and notes for each move or sequence.

As for the suggestion of including “bots don’t like this”… sure, as a comment that’s fine, but unless you can explain WHY bots don’t like it, refrain from using cheap “reasons” like “it says -2.5”.

I, for one, prefer the KJD way of doing things: lots of actual commentary and notes for each move or sequence.

In this case, Kogo’s Joseki Dictionary (http://eidogo.com/) hardly does a better job than josekipedia or OJE.

It does claim that this is an overplay by white (unknown to me before this game, but matching KataGo’s critique): 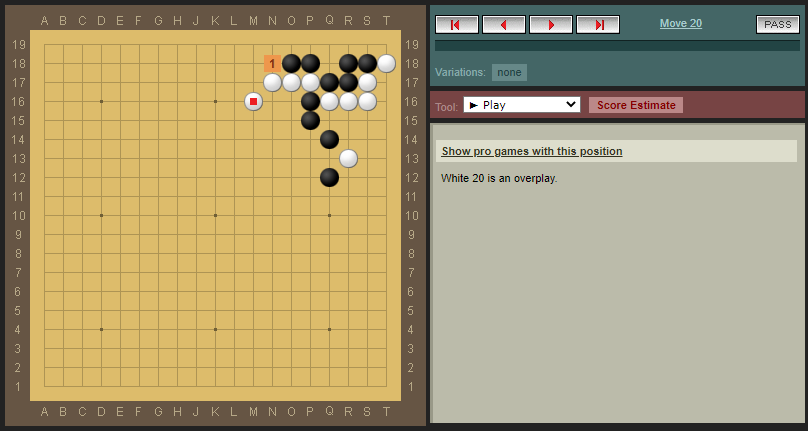 …but then it fails to show why, simply stopping at this point: 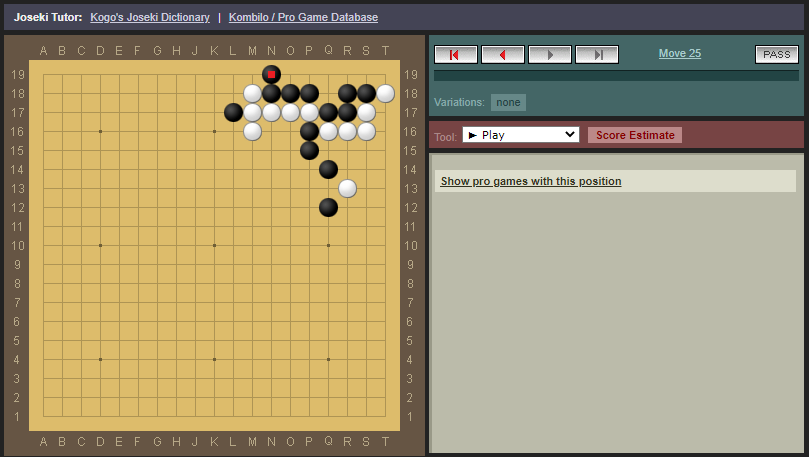 I said that I like KJD’s way of doing things. Nowhere do I claim that the actual information in it is more accurate or that I’ve seen all branches and found them to be suitably well documented. Overall, KJD has high comment density and in order to know what to even consider when picking alternatives, short notes like “this trades w life in the corner for B influence toward the middle” at the beginning of a sequence is probably more helpful than to have a move listed that’s doing the same thing but slightly more efficiently.

Nowhere do I claim that the actual information in it is more accurate or that I’ve seen all branches and found them to be suitably well documented.

I didn’t claim that you claimed that (I’m sorry if I came across like that). I just liked your comment and it piqued my interest to check what KJD had to say about it.

Okay, so in the interest of clarity, what do you think should be done now and in the future with sequences bots don’t like (or like, again), and what standard 19x position should be used as a reference for what bots like? I’ll help you out with a few suggestions.

Isn’t it complicated to say categorically that AI disagree with a specific joseki? What board state do we use to test the joseki? How vehemently does the AI need to object? What about situational joseki that are correct or playable only in specific circumstances?

I agree that we should be incorporating AI somehow in evaluating joseki, but the specific algorithm needs to be carefully thought out. If you could have Kata analyze all the pro games in which the joseki occurs and spit out statistics (average score, variance, etc), then that might be very useful.

and what standard 19x position should be used as a reference for what bots like?

I implied all of your concerns, but thanks for explicating them.

These were less concerns and more legitimate questions.

I’d say that any move that loses more than about 2 points according to AI in common early game positions (say just 4-4 stones in the other corners in a parallel and cross fuseki to account for ladders), should be up for debate (to potentially mark with “Kata’s seal of disapproval”).

How do you expect an individual to have answers to a question that requires group consensus (which has not yet been sought nor found)?

I can’t tell if you’re being serious here, but one way to find group consensus is to ask knowledgeable individuals to share their theories or opinions on the matter. This can then serve as a framework for a larger discussion.

I didn’t mean to demand that you, smurph, solve everything by yourself, and though I replied to your comment, I did not intend my comment to be addressed solely to you. I was just discussing how one could create a “Kata’s seal of disapproval” as mentioned in your post.