~6kyus - I struggle with my attack tempo

I don’t know exactly when I should stop attacking and when to take big points (and where to find them).

Anything would help. Thanks!

I think first of all there were issues with your opening.

Move 6 looks quite passive to me – however, it’s a top professional choice so it must be fine. Even so, you might want to study those professional games on ps.waltheri.net to get a better idea of how they use the splitting stone. You may find approaching the corner easier.

Move 8 should perhaps be a pincer. After O17 the top side looks a little cramped. I would again consider a pincer on Move 10.

Move 12 is a somewhat odd extension – again, it is more passive than approaching the corner.

Move 14: R14 is a more active move, challenging the looseness of the large shimari – I expect this would be the professional move. Making a base is playable though.

Move 20: C6 is probably better, allowing you a range of forcing sequences. Check them out on Waltheri if you aren’t familiar already.

Then in the middlegame, Move 34 may be better pushing up at Q10. Move 36 is a key mistake where you don’t consider the effect of R6 on the shape. You continue with the mistake for some time instead of admitting error and limiting the damage.

At Move 46, Q11 is a key good shape for improving what remains of the right side group. I don’t think either the S9 for S8 or P6 for Q5 exchanges should be made at that point as they worsen your shape / reduce your liberties. You get another chance to play Q11 on Move 48.

Move 60 is perhaps too slow. You can use forcing moves against the top right shimari to make shape for the main weak group.

On Move 66, N12 looks key for settling your group actively by gaining the advantage in the running fight.

The rest of the game isn’t very interesting.

Keep your stones connected, and only cut when your groups are strong and safe. That’s the big issue.

Move 35 should be at Q11, so that you don’t get cut. You lost all your points on the right side, and if you had those ~10 points and if black didn’t get anything out of it, you would have won.

Move 22 is unnatural. I’d probably play N3 to avoid black invading and using the large space on the bottom.

the way to attack is usually chase opponents weak group/stone around while building territory/moyo at the same time
occasionally you get a kill but this is rare, you go for the kill unless you are sure of it or unless you want to gamble otherwise attack n profit is the key strategy to the game

another way to attack is by invading opponents territory/moyo and making life in there tearing opponent’s moyo/territory into pieces, although opponent can also be said to be the attacker attacking your invasion

I don’t know exactly when I should stop attacking and when to take big points (and where to find them).

there’s a proverb “urgent before big”
urgent in my definition is a move that can question your group or opponents group life/death status
if there’s no urgent move, then play a big one, you can easily do that by finding the emptiest places and place a stone there

Thanks for taking the time for the review.

I was white in the game. Your review looks like it was for black. Are your comments still applicable?

Thanks for the comments.

oops, i thought you were black, i looked at the post saying 6k, in game black was the only 6k 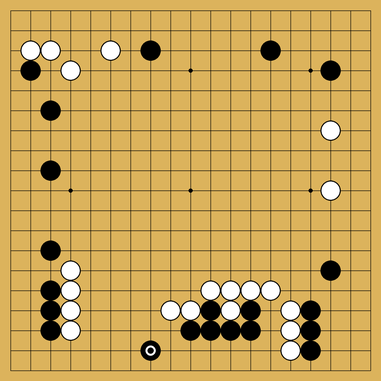 in game you go into random fights without thinking about results
alot of them are pure reading, maybe touch up on it thru tsumegos
have a goal when you get into those fights
before you get into a fight, ask yourself what you are trying to accomplish
while in a fight, look for the best/better moves to accomplish your goal or try to get a better result than your intial thought

also into the proverb i mentioned earlier, urgent before big
you ignored obvious urgent move in game then went for super small move
always look for weak groups, yours or your opponents, then you will find those urgent moves much better