We use the old japanese recommendation for handicaps and komi, which is 5.5 for an even 9x9 game

Going to the site and checking out this game with automatic handicap: https://online-go.com/game/1484829, I have come to the conclusion that OGS thinks that a 20k player is 11 ranks weaker than a 13k player. This is strange. The handicap calculation probably has got a bug in it. 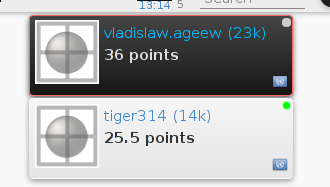 I count 9 stones difference, which still doesn’t add up.

There are two places to look at when figuring out the ranks. The second place is game information page. I wrote the ranks from there. I have no clue which ranks are used for handicap calculations and I generally dislike the system where you have four ranks and on every page one of them (maybe at random, I have no clue) is displayed, without info about which rank it is.

Looks like it’s just a display issue where the UI is not using the “Live” game speed rank to display. In that case the handicap does add up

So, there are two different ranks shown for each player and yet, neither of them is used for handicap calculation?

If you go to a player’s profile page you will see that we have 3 game speed ranks and then an overall rank.

Handicap selection is based on the player’s rank as determined by the speed of the game (blitz, live, or correspondence).

I think we are doing this correctly as per your very first link.

For 9x9 where automatic handicap is selected here is our basic algorithm:

Note that in this game we didn’t use an 11 stone handicap… we gave black 3 stones.

First thing to come to mind after finding out what the functions mean: why isn’t ‘/4’ inside the .ceil?
OK, to the point, the three point handicap is correct, but the -2.5 komi corresponds to 11 rank difference, A komi of about +3 would be correct for a difference of 9 ranks.

Just finished another handicap 9x9 game https://online-go.com/game/1505882 and again the komi doesn’t seem right. Since there is a two rank difference between me and my opponent in every rank, the komi value according to the table should be 0, but it is 3.5. Could you please check the way server decides komi for automatically handicapped 9x9 games?

Edit: my opponent’s rank has just changed, but this game is another example https://online-go.com/game/1505978