I made up an alternate rule set to Go that simplifies the rules, adds an extra stage to the endgame, and makes the game more palatable to beginners.

Here are all the rules:

This rule set is better because live/dead groups don’t have to be addressed explicitly by the rules and there are absolutely 0 ambiguous situations where scoring is unclear or could be challenged.

Here is a link to a 9x9 game using this rule set that I played with my uncle (https://online-go.com/game/32640731). He was still learning the ruleset and its implications, but notice how the number of eyes matter, even in already live groups.

I think adopting these rules could make it way easier for beginners to get into the game while also introducing some interesting subtle things to the game. With these rules, how you live matters a lot, and reducing the number of eyes in your opponent’s territories in important.

You should look into Trump-Taylor rules though. It’s functionally equivalent to the more common forms of Go, but also goes until legal moves are exhausted.

You have rediscovered a very nice idea! This variant is known as no-pass-go (or sometimes Conway go, named after John Conway). It is very close to regular go, but there are a few differences. The main difference is the post-endgame stage you mention, but there are also some other side-effects, see for instance this post.

To turn your variant into basically normal go, only one additional rule is required:

(so essentially we re-introduce passing, but with a limit, making it so that someone will still run out of legal moves eventually)
With this rule, komi is nicely handled by simply giving white something like 6 or 7 extra prisoners before starting the game.

No-pass-go with prisoner return is my favorite rule-set for mathematical elegance, but there are some other nice candidates for beginner friendlyness. See for instance the rule-set used in this introduction, where the game ends after two consecutive passes, and each player’s score is simply the number of stones they have on the board. Which exact ruleset is easiest depends on the particular beginner, but these two (no-pass-go and stone counting) are both good options to keep in mind.

As komi, white may pass a total of 2 times during a game instead of playing a stone, and black is not allowed to pass at all.

I don’t understand this. You mean at the beginning? Or black can force white to pass any any point in the game?

White can choose to pass at any point instead of making a move, and white can do this a total of 2 times during the game.

I like that ruleset too! I didn’t know that this formulation of the rules already existed. I like these rulesets because they fix all the edge cases that can occur with normal rules. See this game, where black wins because of a point on a7 that seems a bit arbitrarily given. https://online-go.com/game/32642326

I didn’t know this ruleset existed before. Thanks for pointing me in the right direction!

for clarity you should fix the case of suicide. Is it allowed?

goes until legal moves are exhausted.

The basic Tromp-Taylor rules do not require all legal moves to be exhausted, but does require all dead stones to be captured in a sort of clean-up phase. However, without significantly changing the strategy, the rules are easily amended (as described in the commentary) to allow a dead stone removal phase, which makes applying these amended rules no more complex than other simple area scoring rules.

It’s allowed except for single point suicide, which violates the superko rule.

then it differs from most of the rulesets ( besides the NZ one). It’s not a minor point, take the L in the corner, it’s quite a familiar situation happening

Thanks for the clarifications!

Is this no pass with prisoner return really equivalent to standard go (Japanese or Chinese)?

See the following position, where there’s no prisoner. In standard go (Japanese rules, komi = 0), this is a draw. But if pass isn’t allowed white has to self atari. So it seems group tax is a thing. 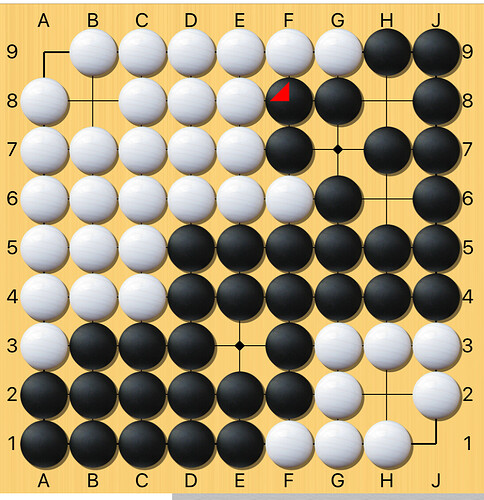 Personally I find group tax very natural, and see it more as a feature than a bug. But if one really wishes to get rid of it one has to take the extra step to something like Tromp-Taylor, which counts area and not only stones/moves.

It might be elegant, but I did not get it.

“A group is taken off the board if it has no empty liberties.”
Whenever I try to explain Go to someone this is where they get lost. It takes forever for an adult to understand what a liberty is. Or even if they “know” it still takes many games until they stop making self ataris.

Ah, I realise the thing that confused me about this ruleset.

If I understand correctly, there is no real thing as a “scored game” in this ruleset, right? If you have less “points” then, in hard-coded terms, it seems that you simply “lose” since you have to continue placing stones. A result like “W+5” doesn’t actually exist except as convention.

Score can still be defined. W+5 means if black is given 4 free passes they still lose. But as you could see, this is less intuitive.