Hey Go players! We are starting up an online Go Academy named Takumi Go Academy. Our teachers have participated in many international competitions with solid results, with years of teaching experience. We have a free website that includes life-and-death, openings, tesuji demonstration for all level of players, please don’t hesitate to have a look at https://en.1200igo.com/ We also have a YouTube channel https://www.youtube.com/@TakumiGoAcademy/about , currently we have some life-and-death videos, reviewing pro games and some sandbagging with explanations videos.

Thats awesome site, im happy to see yet another good resource! It looks like well-made site, maybe it should be added to Play Go at online-go.com! | OGS? ^___^

Thank you for your support, we have already requested to OGS manager! 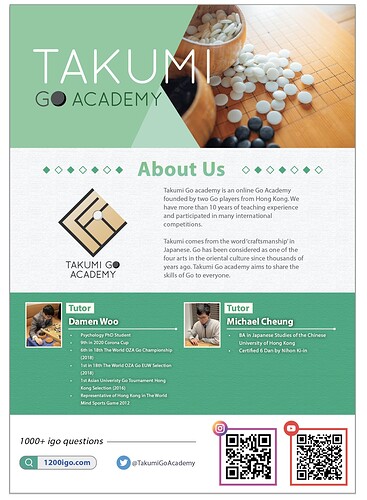 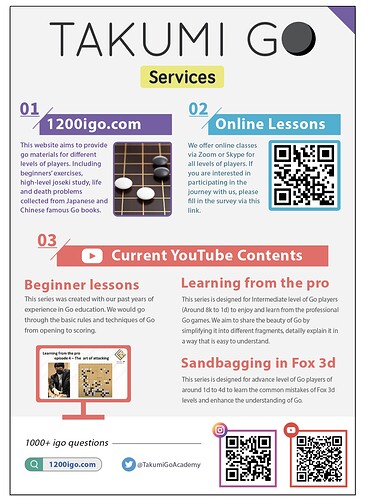 Thank you very much for your comment. It is very helpful as we don’t know that this word may indicate negative behaviour.

What we want to mean here was to lowering our actual ranking and play against players in Fox 3D. Through playing with them, our 9D player punish their mistakes, so that the viewers can learn from the 9D player in how to punish their inaccurate moves.

Your feedback is highly appreciated, and we are changing it to Sneaking into 3D, learning from their mistakes.

Just to clarify: what you describe is indeed sandbagging, but sandbagging is considered negative behaviour on OGS and is not allowed.

Maybe you could try to find players who would willingly play against stronger opponents for teaching purposes, but I don’t know if those games would give you the same opportunities to teach how you want to teach.

I mean they can kind of do what they want on Fox Go server and that’s up to Fox to deal with it.

It wouldn’t be the first time strong players have made series playing below their ratings on Fox for instance in order to make content.

But I do agree about the point about intentionally lowering ones rating on OGS, and playing rated games.

In terms of the word sandbagging, it is kind of negative because it has the idea that you’ve intentionally lowered your rating in order to beat unsuspecting opponents, which probably isn’t fun for them. Though it doesn’t necessarily stop people using the term in video titles and series, since it is a convenient or apt description, so if that’s the content you’re looking for you can find it quicker if that’s how it’s named.

I mean for fox specifically, one could probably also do a “ranking up” series, since you’re not explicitly sandbagging if you’ve set your rank as high as it can go anyway which is something like 3d? But you’re still playing to rank it up to an accurate rating.

I suppose one could still argue something about only using one account etc ethically, but I don’t know, I can kind of see the benefit of these kinds of materials and how certain players could play differently if they knew they were playing someone stronger who may or may not be playing leniently or have some agenda. Or you just might not get the players and variety of players/games you want

No matter how you word it, sandbagging is still sandbagging. If you want to show mistakes of a fox 3d for the purpose of teaching, why not play one of your students instead of punishing a stranger.

So what if you teach boxing/self defense, you go attack a stranger on the street?

I know streamers do similar things and I don’t respect those kind of behaviors. I suspect there are others with similar thoughts.

My suggestion is not to market this in your front page.

Thank you for all of your comments. Through reading your comments, we notice about the cultural differences between the East and the West. In the East, this is seldom regarded as a negative behaviour especially if you are doing it for educational purpose. Asians rarely have hard feelings playing against strong players, and sometimes even treasure this opportunity. There are many videos on YouTube doing similar things on Fox Go Server and we have received positive feedback.

With this being said, we fully aware of the regulations on OGS and we will not use OGS as a medium for doing this. We also highly appreciate for every suggestion you have made for us as those enhance our awareness in the ethic of Go.