A problem I had with scoring this game

Hello, I can confirm that you counted correctly. The estimator uses area scoring (Chinese rules), which is more computer friendly but can produce a conflicting result in close games that use a territory scoring ruleset. Sorry for the confusion.

To expand on the most notable differences:
In Japanese rules:

A pretty good comparison of different rulesets is here:
http://www.britgo.org/rules/compare.html

Generally both the rulesets usually yield the same result (so don’t bother with it unless you really want to know), but under special cases or by some unreasonable moves (like filling your own territory) they can start to differ - as discussed above

Thanks, that clarifies a lot.
I still don’t understand why black playing the last move should matter, though.

I still don’t understand why black playing the last move should matter, though.

In area scoring the stones count as points. if white passes and black gets to play an extra stone then they get an extra point. when it goes black/white/black/white the points stay even but black/white/black white misses out on the equalising move.

Just to be clear, in the Japanese ruleset it doesn’t matter.

Correct, but in Japanese filling in your own territory DOES matter, whereas it doesn’t in Chinese.

There are two kinds of problems with the estimator:

The first one is a “Hard Problem”. No-one expects a solution in the short term.

This thread is really about the second one, isn’t it.

anoek recently commented that he thinks that we can do better about the second one, and has it on his list to tackle that, so that we don’t get this “wait, the estimator told me a result that is 1 stone different to the real result, at the end of the game”.

The estimator tends to give points in places that clearly are and will be dames, i think this is exactly due chinese counting, where living stone in dame actually do count as a point. But when you are using japanese rules, there won’t be any points by playing dame, nor connecting fake eyes or such.

In your game white did pass twice, after pass on move 278 black played j4, which would have been +1 point move with chinese rules, but not under japanese ones.

while all the discussion about about difference between chinese rule and jap rule is correct, i think they are not the cause of OP’s question.

and estimator works reasonably well when you are down to the last stone or something.

i THINK the problem is that, in the final score, 3 areas were NOT COUNTED. why did that happened i don’t know 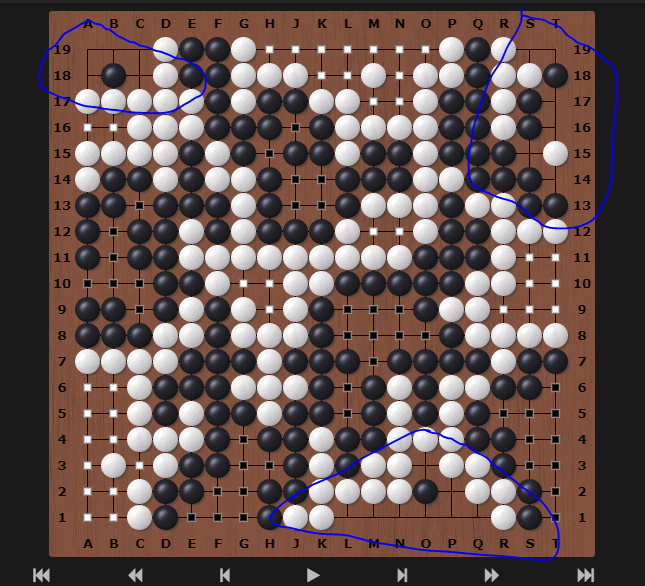 Fair point. Brings us back to the golden rule. When playing against bots:

Nb. Chinese Rules allows this to be done without changing the score.

The official Chinese rules make no mention of handicaps. So how handicaps are handled is on a per server basis or player agreement. Anything you read on the subject would merely be someone else’s interpretation of how they believe it works or how they personally house rule it.

According to this article at the BGA, Chinese rules count the total number of stones (for example, 4) and divide that number by two (4÷2=2). That total is subtracted from Black’s final score and added to White’s final score. Black gives White compensation for handicap stones, so that the area which they occupy is not counted.

Concerning how OGS handles the scoring for Chinese Handicap, compensation is awarded to the opponent. The number of Handicap stones is added to the opposing player’s score. This can easily be seen in this game, when hovering the mouse cursor over the number of captures for Budgie.

This can easily be seen in this game, when hovering the mouse cursor over the number of captures for Budgie.

The numbers there usually don’t sum op to the player’s score. The handicap 4 would be there even under Japanese rules.

Are you saying that the number of handicap stones aren’t added to the opponents score? Here is a completed game that shows that they are being applied.

As far as I understand, in OGS: