A question about studying joseki with AI

A question about studying joseki with AI: to find out about the next white or black move, should I base it on (1) number of visits (for that move), or (2) winrate of that move? See the two arrows in the diagram: the move on the left has a higer number of visits and thus the choice of the application (LizzieYZY + Katago), while the move on the right has a higher winrate, what should I do? Your comments are highly appreciated. 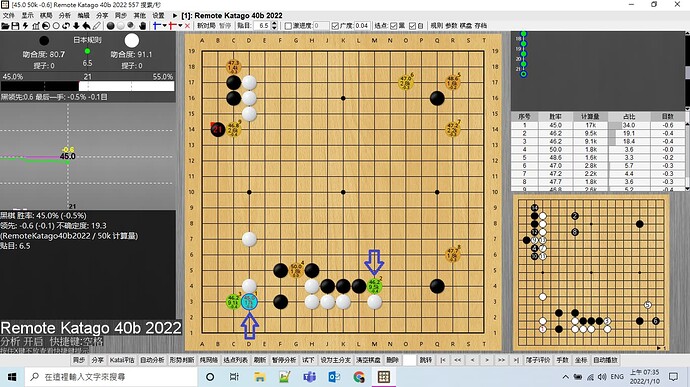 I suggest playing the move you understand better. If you don’t understand it, then you might mishandle it, even if it is theoretically better.

One word of caution though: AI isn’t an oracle, and its preferred move doesn’t exclude other valid and equally good moves. In my view, any move with significant visits or within about 1% of the blue move should be a good move. Any joseki study worth its salt should take these multiple possibilities into account and not dismiss them just because the AI slightly prefers one of them.

AI won’t tell your about the next joseki move, because joseki is standard local sequences accepted by humans and often played in actual human games. It tells your about good moves in that full-board position instead.

I would recommend to create joseki on empty board. And use identical number of playouts on all candidate moves. After that ignore winrate and look at score estimate. Choose move that you like from moves with biggest score increasing. Such move probably would be useful most of the times.

If at each move you are able to find either a blue or a green move, then you are probably pro level.