I’m suprised this is such a topic for debate.

I’m fully for a addition Go chat, as the language chats are quite ambiguous in regards to topic. Why force the English chat to limit itself to Go, while other language rooms talk whatever they want.

Furthermore, English chat may be willing to change it’s topic, but most people simply don’t want to butt in, when we are in full discussion. It can’t be seen from the outside, how willing chat is to give up the current topic for Go.

And using Offtopic in the classic way as a place for random music links and for sensitive topics like politics seems more sensible, too, than to force all english chat people into Offtopic all the time

I like the idea of a Go only chat room. On discord I have a general Go discussion and a non-go discussion that are pretty active.

If it is as simple as it is on Discord I don’t see why you couldn’t test rooms for a week or two and if no one uses them then turn it off. That’s what I do on Discord.

When I first joined OGS in December 2016, the English channel was largely about go—believe it or not.

I cant see how anybody can reasonably object to a go only chat room in web site devoted to go.
whether people stick to the " go only " rule, or how popular it is - idk.

How did the english channel change from go to oiling 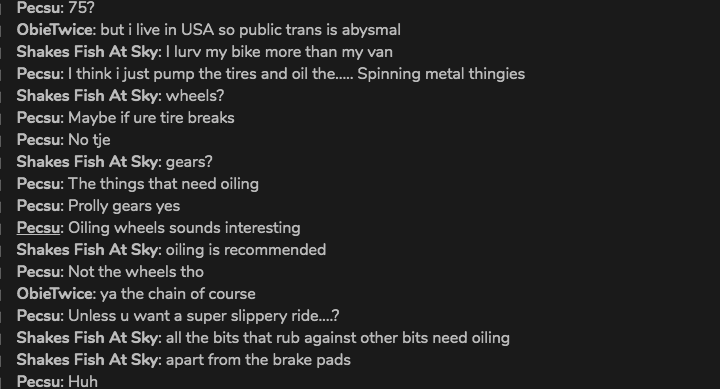 There you go, knock yourself out!

We all know it’s a silly solution, right? That’s why I’m not going to join. Whatever I or you will write there will be seen by how many people? Not many, and someone will have to make all that effort to scout and invite new members. With that in mind just writing it in go basics group chat is more useful at this point. Or here on forums.

And I’m already doing it from time to time, for example, in go news topic.

Do you think it’s something worthwhile that OGS members should see? I think so. And the point is that a lot more people would see it on main site. Tons of people engage in OGS chats who’s never seen on forums.

Offering to do this in a group chat that no one sees in response to my post where I talk about visibility to new people /:

Should OGS forums also have only 3 topics visible to new members by default?

So is the general thought, get rid of off topic and instead public channels are basically “anything goes”, and then have a specific “Go” channel for go-chat-only or something?

No other changes. Off Topic stays as is for those who like it. Public language channels are already “anything goes”, especially non-English ones.

instead public channels are basically “anything goes”

Is this not already the case? I mean for the “English” channel, it is not currently restricted to only Go chat?

Yeah I mean they are, but I guess I feel like Go chat has priority (or at least should), but with a dedicated Go chat channel, perhaps the feeling of that priority would be diminished.

heresy idea: Make off topic the default channel instead of English - other languages may stop being empty

I’m warming up to the idea of just using go basics group for go stuff. I don’t want to admit but probably the demand for go discussions isn’t high enough to warrant separate channel, when I think about it.

i dunno about that, logically that would mean all language chats would have to follow those rules, and then where would people put political posts