Hello,
I am new to the exciting world of Go. I learned the rules of the game and had one first instruction on a 9x9 board in real world. Now I have registered to OGS to learn playing the game with a little help to start my first games online.
Best regards - Manfred

Sure, send me a challenge and we will play.

Since you are new, you should use Chinese rules.

Thanks, at what time you like to play? Is it possible tomorrow morning around 10 o’clock.

In case you didn’t realize, people on OGS come from all over the world; “10 AM” for you might be completely different for somebody else, so you should always specify the timezone.

You can insert such a timestamp by clicking on this button when you write the reply:

Your name sounds German, so we may be in the same time-zone (and the same country) if that guess is correct. I could do a teaching game tonight, basically within the next 4 hours.

Thanks for this hint with the timestamp.

Yes I live in Germany in Erfurt. In my profil I could not fix the country, so that other players can see it. This evening I have an appointment, but would be glad if we could play tomorrow arround that time.

Sorry, tommorrow evening our local Go club is meeting. You are invited to join us if you don’t mind the 350 km journey to Hamburg.

I’ll send you a correspondence challenge for now, it’s not the same, but we can play and chat along slowly and maybe find a spot for a live game later. Just decline the challenge if you don’t like correspondence at all.

That is a perfect time. 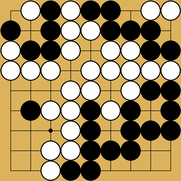 You may feel an absolute beginner, but you don’t play like one.

9: This is not really a bad move, but there is a more urgent move.

10-17: White made a nice dent in your upper right corner. F7 instead of E3 would have prevented this. Also the cutting points H8 and H6 offer White some good opportunities.

22-32: White splits Black into 2 groups. Not good for Black. It is much harder to defend two groups than one group. Always try to keep your stones connected.

35: Strange move. Running away in the middle of the battle. J9 is the only move. When white play J9 the group is dead.

39: Not urgent, unnecessary and a stone in your own territory (minus 1 point). If you really wanted to make your group stronger F3 would have been a better move.

45: Again a stone in your own territory.

57: F9 should have been B9. You added a stone to an already dead group and forgot to defend your one eyed group in the top left corner.

It reflects at some points how I feel during the game. The two strange moves you mentioned that black played. At this points I had no real idea where to play and why. This is also true for the unnecessary stones in my own territory.

I think I will get a better understanding of local situations together with a better view over the whole board situation simultaneously, just by practical experience.

Have a good day

35: Strange move. Running away in the middle of the battle. J9 is the only move. When white play J9 the group is dead.

Oooh, interesting. I was thinking that even after Black J9, White J8 would kill the group, as any immediate local and legal reply by Black is self-atari. And I guess that might be true if this was a tsumego with only the corner, but since this is a real game, the ko makes the status unsettled.

Being that this is apparently their second game ever, they were already punching way above their weight, so I would be incredibly impressed if they could read that. They might barely be aware of what a ko is, most likely don’t know what a ko threat is and have no idea how impactful it can be on a game, and they might barely, or even not at all, be aware of “life and death problems” being a thing.

Other than the things I nitpicked on, I think it’s good teaching!

And thank you for your service to the community

Hello Manfred!
Send me a challenge and it will be a pleasure to play with you