Active games list sorting by clock (own) does not work correctly

My active games list does not seem to sort the games by my time left when I click the ‘Clock’ header. Or if it does, it’s not correct. Right now, I have one game with 31h left, and other games are at 2d23h - 3d.

Nothing too serious, but a little nuisance.

I also encounter this on my “home” page which is displayed with miniatures.

These are my first three displayed games:

Note that it’s only the first game which is shown in the wrong place, all my other games (currently 22) are in the correct order.

I don’t know if this is a different issue, especially since this one is an issue from 2017 and without paused games, but when I sort my games by “clock”, especially during the weekend, the game orders are messed up by paused games(both vacation and weekend, no clue about normal pause feature). I don’t think I should have to look in between games that have over two days and weekend pause to find a game that is my turn but has under 24hrs for me to play and no weekend pause. This can give me the false sense that it is not my turn, or make me assume that I don’t have any games under 2 days, when I could have many of them. The top game on the bottom screen shot is the 6th game listed in the top screen shot. It isn’t my turn in the 24hr game right now so I don’t have a picture of that one, but that one is usually in between teo weekend games. If anything I think that the games on pause should be listed below the non-paused games if I am sorting by clock. Those ones are the ones I don’t have to go in as often to not timeout in. 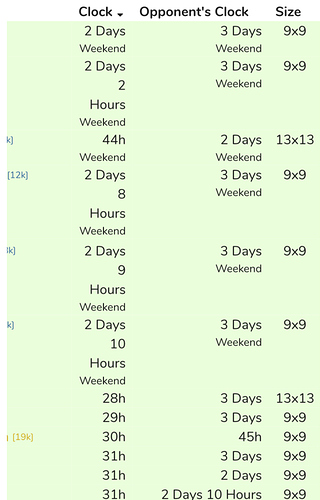 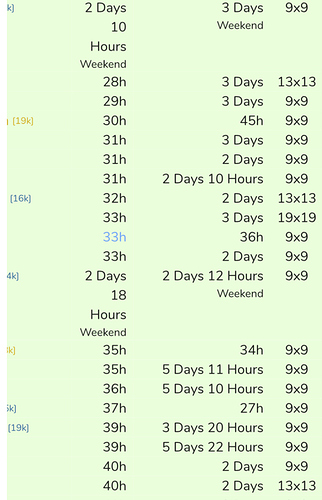 image750×1161 298 KB
I think one thing that could be done if it is complicated to fix this(I wouldn’t know because I don’t code) is that we could have a filter ti filter out these paused games that you just click and it would move the games down or out of view. Then all of the unpaused games wouldn’t be behind paused games with more time.
This may not be a big deal if you have very little games, but as someone who signs up for too many tournaments and has too many games, I am not able to do my move in every single game each time I come on. I don’t want to timeout because I didn’t see a game hidden between paused games. If possible, can you please change this, or add a filter to filter out the games on vacation.
3 Likes
trohde May 15, 2020, 10:25pm #4

I’ve set my starting page to show miniatures, and I have also noticed that, sometimes, games with shorter time left are sorted after games with more time left … even lost two games on time recently because of this.