My fighting skills need a lot of improvement. Often i avoided fights because of that. Then i read that the Low Chinese makes a lot of fighting necessary, but i get the feeling that with this opening a lot more people resign early or timeout early.

So i’m looking for another opening that invites fighting without driving people away.

There are many professional players who play a fighting style. Yamashita Keigo is one I enjoy, he experimented alot with different openings. His games around 2007-2009 might be good source for openings. Especially his variations on two starpoints, and san ren sei… He has a book on the topic too called Breakthrough Attacking Power.

And for this guy, look at his earliest games - you’ll be hard pressed to find anything more violent than that (e.g.: http://ps.waltheri.net/database/game/11031/). 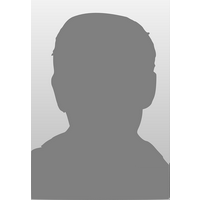 Many thanks Telach_4d and Smurph!
I looked at some of those players’ games but i’m far too weak to understand much, especially when they start fighting

The only things i can see is that they either create one or two bigger sides to invite moves there and then attack or just start attacking outright.
Interestingly i had two games since i first posted where i just played the star points and then some ordinary approach moves which were attacked directly

And due to the practice i got with the Low Chinese and my Tsumego Diet (corner + tesuji) everything went fine for me. One played even almost to the end

!!! Many thanks to that nice person who corrected my atrocious grammar in the title last night !!!

Learning how to fight is similar to learning to expect the next note in a melodic progression. Once you’ve heard enough of those, you just “feel” what the follow-up is. (Incidentally…)

Openings don’t matter nearly as much in Go as they do in a game like Chess, where the opening tends to really set the mood for things to come. I’d honestly play double 4-4s and then just approach your opponent’s stones from the inside basically every time until you master the joseki arising from the star point. Once you get bored of 4-4s, try branching into the 3-4. Pros open with some combination of 4-4s and 3-4s most of the time, so you’ll probably be playing the pro moves until at least move 3!. Don’t worry about learning any specific fuseki. Learning to respond to what your opponent does is more important than memorizing a specific sequence of moves and some responses to your opponent’s most common ways to approach. (If your opponent plays a fuseki, just approach from the outside and let them have their territory. It doesn’t matter.)

In terms of getting a ‘fighting game’, there’s a number of different ways you can go. Option one is to fight everything always. For the “fight everything always” approach, just play every cut that doesn’t immediately die. Aggressively attack whatever your opponent is trying to do instead of building.The board will become a wailing morass of weak groups, and stuff will fight and die. It may well be your stuff that dies. If you’re going to play like this, play slower and read EVERYTHING. Pros that play super fighty games are great at reading, and aren’t just fighting for the sake of fighting (well, some fighting for the sake of fighting, but with a goal in mind.) Their shape may look terrible, at times, but they’ve read out how to defend all of the weaknesses. Mi Yuting is a good example of this sort of style. Most of the more aggressive kyus that play like this just cut everything without reading, and figure they’ll win or lose in the fights later. In general, 70% of those cuts are bad moves or overplays, but they get away with it because their opponents aren’t reading things out either, or don’t have the skill to build solidly while their opponent is playing crazy cuts.

You’re better off, in my opinion, letting the fights come to you. Focus on playing good, solid moves, and your opponent will inevitably give you opportunities to cut through weak groups, take away bases, etc. without going nuts and overplaying everywhere. Especially at your level, learning to play good, solid moves is far more important than getting into fights.

I took a look at one of your recent games. Here’s a review: 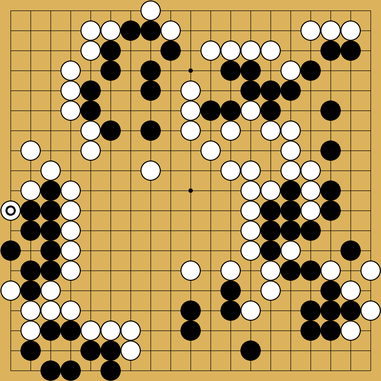 If you want to fight more, play cuts, and read out what happens when your opponent cuts you. You successfully got into a fight on the left but you didn’t take advantage of your opponent’s cutting points, letting them connect up, and didn’t protect your own critical cutting point, losing the profit you did gain from the fight. Looking for opportunities to stop your opponent from linking up, and making sure you’re strong enough to do so, will go a lot further for you than looking for particularly combative openings.

Many thanks for your advice ckersch88! I tried to play with it in my mind the last week and it works so far.
I was looking for competetive openings to force myself to fight, not because i love that brawling chaos :). But starting with star points and ordinary approaches really is enough; most people attack very soon (or interpret an approach as an attack and react accordingly).
The Cross Hoshi opening is nice for this, it creates more groupes and therefore more opportunities without being a special strategy. I started playing it as black and allowing it as white.

Your review is much appreciated, too. Thanks

Black here looks fun. Tried it on tournament once 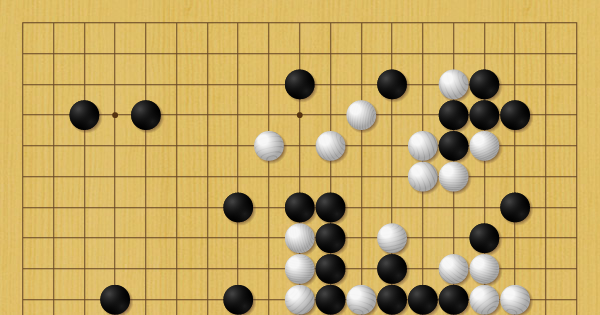 I too like fighting games but I sometimes find that I follow too much fuseki and focus too much on empty spaces so when I want to start the fight the board is pretty much settled.

Maybe i will try the advice and cut more at earlier times.

@Pond_Turtle
Please tell how did it work out at the tournament; i’m really curious. — Also your stength back then, if you don’t mind.
It’s great how Cho Chikun 9p killed that big group with all his seemingly weak groups. (of course, at currently 15k i misinterpret a lot in such a game, so maybe they weren’t that weak at all)

Cho Chikun is really good at living. In this game, he played a lot of “small” looking moves to make sure his groups were thick and alive, or at least to make sure he could live with his weak looking groups. He also doesn’t hesitate to give up a few stones, so long as the majority of a group is alive. My guess is that he’d read out how to live with all of his groups fairly early on, and as such was able to ignore what his opponent thought was a big ko threat and connect up to his “dead” stones in the center.

After the ko-smoke clears and the players are approaching endgame, (say, around move 188) if you work out all of the life or death sequences, all of his groups are alive. (Top left lives in seki, I think.) They may not be worth much, but they’ve got, or can get, two eyes. His strategy, for the most part, was to use his strong groups to push around his opponent’s weak groups and reduce, while relying on the big bottom territory he built to win the game for him.

My counting isn’t great, but it looks like he was ahead by roughly komi, or maybe komi plus a few points, heading towards the endgame. His opponent probably decided that trying to get a second eye at the bottom was his only chance, sine he needed to reduce Cho, and a gote move would lose on points. At move 208, he could respond to the capture by getting the eye in the middle of the board, but went for the bottom and died.

But yeah, pros will play with some horrifyingly weak looking groups, which are somehow alive because of a 20+ move sequence they read out. Look up some Mi Yuting on Ke Jie games if you really want to wonder how all of the weak groups are managing to stay alive.

It was tournament that got me to 8k EGF I think. Basically opening and way I handled it forced opponent to start fight on three places at the same time and I let him live or run playing thick most of the time. That way he really only ever got to make serious points on the bottom side and I won by about 10-15 points if I remember correctly.

Basically, Sanrensai and Chinese opening well understood -(there are a lot of books on these)- what I would call "moyo-influence opening, lead both to tense fights.

These classic opening are as difficult to play as they are easy to understand and then to review them after. That make them not a very sure way to win but a good way to learn precision in fights, direction…

Allow me to interject here, the main takeaway from the past two years is that humans had a poor understanding of those openings. That is also true of the Kobayashi opening.

Now I feel I have to make a recommendation. I would say pick pro games that are from 2018 and after. With the new-found focus on corners, fighting and exchange sequences appear early in the game. As an added bonus, you get to learn modern joseki. Here is one example (second game of the video).

This is a personal choice, and I am certainly not denying the merits of studying older games.

That’s surely interesting (and for me too!) In some way it’s true that we could almost burn all these old books (not joking) and games.
Problem is everyone is still trying to decode these new input in go theory, so I dunno what an intermediate player can do now. Wrong old way, copy style of alphago or new experiments of pros?
I’m hard put to give an advice then. Just have to wait and try our petty moves in the new way of play!