After this move, can white kill black?

During my game, I presumed my whole black group at the bottom right was dead. However, when white played S9, I managed to save the group and make two eyes. Had white not played S7, I can find several sequences where black is killed.

After S7, is there any way black can die? 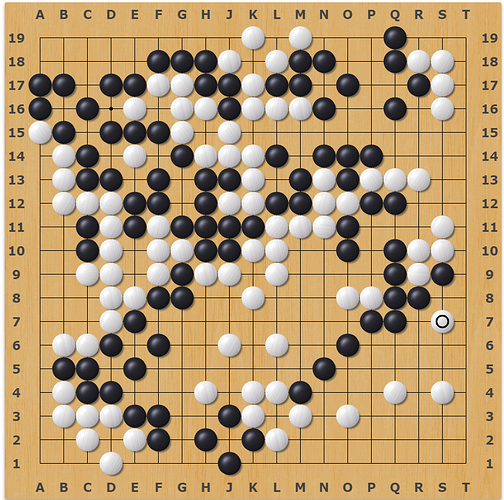 It feels like black has a LOT of options there regardless of what White does. If he hadn’t played S7 and left it for you, you likely could have gotten a second eye off the back of that play - If B plays S7, he threatens T8 for an eye (which presumably W will play T9 to prevent), but then you can start creating ponnukis or otherwise using your wall to make more eyes.

Now, I don’t quite have the full skill to properly analyze something this open, there’s just so many possibilities to what could be played that you end up saying the same thing about most of the plays that white could have made - should he have played Q11 first, or the P5 move that helped you make an eye towards the center, or any number of other moves that could have been critical, eye-denying plays.

If you actually opened the game… you’d see a number of variations detailing black’s limited options.