Age and money in pro go

I think anyone living in Japan can take the pro exam, I’ve read about russian/european people becoming insei in Japan and Corea.
To make a living out of it you would have to be professional or at least a pretty strong amateur, that for sure lol.

In HNG they say you can take the pro exam until you become 30, I don’t know if it’s accurate

In Japan, 14 years old is generally accepted as the cut-off. Michael Redmond came to Japan when he was about that age, and is now a 9p. Many Chinese and Koreans who are pros in Japan came to Japan to become an Insei (trainee) of Nihon Kiin much earlier. So the Insei population is mostly kids. Some shodan (1p) pros are 15 years old (like Toramaru Shibano, 1p). Age limit to take the pro test is 29 years old, which anybody can take.

On the other hand, Antti Törmänen (“Ten” on OGS), who was the top European amateur from Finland, is an Insei now, who has several more years to remain an Insei until he turns 30 years old (unless he successfully becomes a pro before that time). This is a special dispensation for Westerners, I guess. These days the strength disparity between 1p and 9p has shrunk tremendously, to the point some say there is no disparity at all, so the pro test is very tough, much harder than it used to be.

As to how easy it is to make a living depends on who you are, what you can do, and what you are good at outside of Go. For example, if you are a beautiful-looking young lady with Japanese speaking ability, it is quite easy to make a good living as 1p. Some pros are good at charming/attracting people, which tends to reflect on their income.

In general, the narrowing of gap between 1p and 9p, and the growing overall purse, have made 1p income much higher on average than before. But a large part of this is the flip side of the tougher pro test (meaning, 1p’s start scoring good results quicker than before). In a way, you need to worry more about being able to become a pro these days, rather than how to make a living as a pro.

If you need to measure your level, I’d suggest finding an Insei, or top-level 12 year old Korean kids on some Go server, including OGS, Tygem and KGS. Hay Lee sometimes play on Tygem.

If you have a strong desire to go Pro, you can’t forget that the American Go Association has started certifying Pros. They don’t have any type of ‘aging out’ like the Japanese test does, so you if you manage to make it to pro in their eyes, you’re a pro. This does require an american or canadian citizenship, and I don’t know all the details as I’m still relatively new to the world of Go. I like the thought that I live in the country where I wouldn’t be barred from becoming a pro because I wasn’t raised to be one from the age of 12 though.

Ten just told me the age limit for the open pro test in Japan (in August) has been lowered to 22 years old at least for the Japanese. Top 4 finishers of this ‘outsider’ (non-Insei) test joins B-class Insei’s (A-class is top 10, B-class is next 10) to compete in the preliminaries in September for the main Winter pro test in October, Top 6 finishers of the preliminaries join the A-class to proceed to the main pro test (16 participants, 15 games league) for the top 2 pro qualification spots.

Kansai Kiin (based in Osaka) Insei program and pro test (2-0 against 1p-3p, or 2-1 with the 3rd game against a 6p-9p) are totally separate and independent of Nihon Kiin (based in Tokyo) system described above.

I still don’t get what it means or should mean to be a AGA or European Pro. Why is it not enough to top the US/European ratings to have the proper reputation? It seems to me that a test with age limits (and the EGF had one in 2014) is much less impressive than that.

By tallying up the total purse of the pro tournaments in each organization might give you an idea, as becoming a pro without the chance to earn income is rather pointless.

In the three countries with well established pro tournaments, Korea, Japan and China, the purse is by far the largest in Japan, which is shared by Nihon Kiin and Kansai Kiin pros.

Why should someone sponsor competitions that are not open to whoever turns out to be the best player but to those who have passed a test with an age limit?

Wulfenia, that is a good point. I’d think ‘ad exposure’ could be an answer. I once heard the age limit is there to protect the career of those who cannot give up the dream of becoming a pro, meaning you have more chance of success in a switched career path at say 25 years old than at 35 years old, although this might be a reflection of slightly socialistic side of Japanese culture.

Tokumoto, thanks for your answer.

I am sensitive on the age issue because I was older than the other beginners and I had no idea that this could be an issue at all.

If the go federation sends the signal that one does not expect anything from people who start after age X or who are not rank Y after age Z, this has implications for the treatment of older beginners and players in general. (Similar in effect to the practice of volleyball federations to concentrate on pouring money and ressources on the tallest children because much better smaller children could never become world-class players anyway.)

I concede that in Japan most people will be introduced to go at a young age, so the problem will be less there. 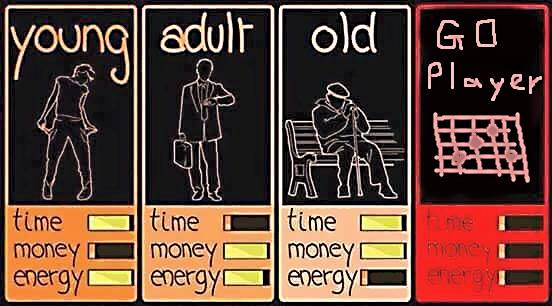