AGF Update - KGS+ to be free 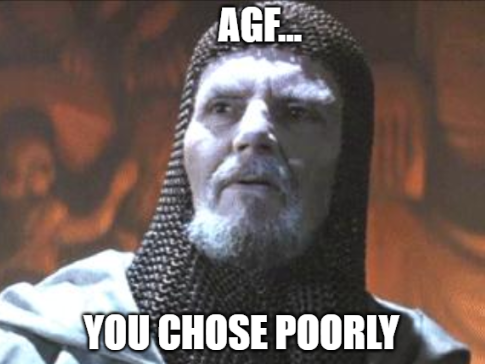 They should have let it die. Ten those folks could have made their way over here! Or anywhere else that wasn’t KGS. I’m not terribly familiar with anything beyond the interface (I briefly played there before finding online-go.com), but I couldn’t stand it at the time. I was so thrilled to find OGS and its beautiful interface and thriving community.

I wonder what prompted their decision? Are they trying to save a piece of Go history? The goals they state in the article don’t seem to line with “best bang for my buck” rationality

It does have some things (rengo and blind go) which OGS does not (yet) have, but I don’t play there in large part because of the game sounds.

PS: I know this has been mentioned before, but I would love a “blind go” mode a la lichess’s (I will defend my use of 's instead of ' in that context). It would be cool if it could be a game mode that enforced it against both players, but I understand that that’s a much more involved task. To make it able to work for oneself one would need to A, add in a White piece option and a Black piece option which made them 0% opacity, and B, a visible marker at the location of the most recent move. I doubt A would cause much issue, but I’m not sure how hard B would be to implement.

One thing KGS does amazingly that pretty much all other servers don’t is their strong kibitz culture.

Obviously I favour OGS, but I do not believe the go world would be richer if KGS were to disappear.

Hmm… well… I have nothing more to say then. If you feel that way, and I certainly am in a position to heed the experienced views of those I trust, then I am happy to hear that the AGF is taking steps to protect and preserve an worthwhile part of the online Go world

“Those with the necessary skills are far too busy.”

How surprising, that if you want a professional job done by professional people, that you have to pay them for it…

Matt and Akita built and ran OGS for many years without seeing a cent. Even now, Matt and all the other moderators and GitHub contributors are all volunteer, with only Akita drawing a very humble wage.

That’s a different situation though, it’s people making their own thing that started it, and is different from people fixing an existing project voluntarily. Especially if it’s a huge project such as revamping KGS entirely.

I dunno I fix an existing project, voluntarily, just because I like the look of it… and OJE was (is) a fairly large project.

Maybe the bigger issue is that kgs isn’t open source?

Just stalling the inevitable - its a waste of money.

The money thing is interesting.

I was talking to a nice new OGS member, who had some questions, and who is apparently looking around for a KGS alternative, and that person’s first question to me was “how is OGS funded?”.

how is OGS funded?

By awesome people like Anoek, other people who submit code to Github, and the mods.

By awesome people like Anoek, other people who submit code to Github, and the mods.

We build and maintain the site, but we do not primarily fund it.

Without the wonderful site supporters, we would not be the server that we are.

What do most people pay as site supporters? Probably less than minimum wage for one hour of work. So anyone spending more than 1 hour working on the site per month, whether being a mod or working on the code, is spending an hour which they could have spent bagging groceries and donating the money to OGS as a supporter. I don’t recall if there are published statistics for OGS, but I’m guessing Anoek is not being paid nearly what his work would be worth on the open market, so he’s probably in or very near the lead for most non-compensated man-hours contributed to OGS.

Yes, I do know the answer, I was just fascinated that it was a KGS person’s first question!

Both are essential. It is true that anoek is taking much less than market value to be a “full-time” developer here. But without the site supporters, this wouldn’t be possible. Having one person be able to contribute 38 hours of focussed attention is much better than 38 people all giving one hour.
Money alone would not make this site, but neither would volunteers alone.

However, a downside of having just a single full-time developer, rather than a community effort, is concerns about the bus/lottery factor of the project, as I’ve mentioned before.

I think for anyone who cares about OGS thriving in the long run, it’s a very pertinent concern.

Well, we still have a community effort. At some point someone has to run the server and I don’t think a community can be trusted with that without someone being the final decision maker… Keep in mind we still have matburt on the core team, he just isn’t able to do as much as anoek does since he has a normal full time job.