Is there any way, after the game is over, to create a branch (i.e. make the move I SHOULD have played) and then continue to play the AI?

You can use the ‘fork game’ button to challenge the same AI again.

Interesting, you really can challenge the AI like that again? 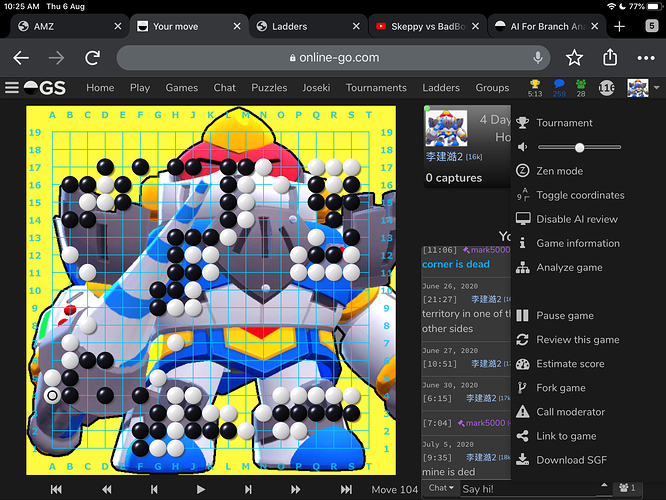 image2048×1536 875 KB
Press the fork game button then type the name of the player u want to challenge, u can challenge anyone but I think they will have to accept it.Oops I forgot to close my taps again
hexahedron August 6, 2020, 2:29am #5

One thing to be aware of though is OGS’s implementation has some slightly quirky behavior - it forgets all history about the game. So for example, in Japanese rules, it loses track of captured stones which might affect the score since captures are worth points. Regardless of chinese/japanese, If the position has an illegal ko recapture at that moment, I believe the illegality of it will be forgotten.

And lastly, which matters a lot for handicap games with bots: it forgets that the game originated from a handicap game, so the bot gets set up with the new game as an even game, which for many bots mean that they will be using the same resignation thresholds and other parameters that they do for even games instead of the much more lenient ones that bots may configure themselves with for handicap games. So if you fork a handicap game in which white hasn’t entirely caught up yet, depending on the bot you may see white resign fairly soon when they might not have resigned in the original game.