Algorithm of Game Selection in Tournaments

I play a lot of the 9x9 tournaments, and I’ve been surprised of the player selection.

Does anyone know what’s going on?

It depends on choices about the pairing system.

What choice was done in that tournament?
“Strength” would have that result.

You may ask the Tournament Director too.

Here is just an example from my tournaments: 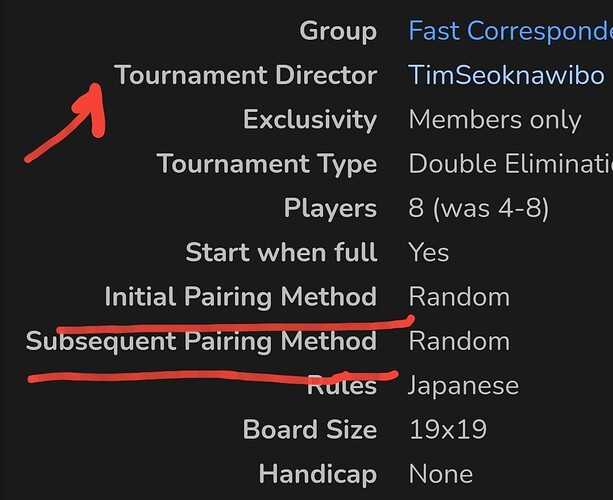 I think this is a bug report, he wasn’t asking for information.
I also play a lot of 9x9 tournaments, where the pairing method is “Slide”, and noticed that it’s not working well anymore. I suppose that it changed the day when a lot of bugs appeared.

This is probably the tournament mookie2000 is talking about and, again, not slide.

Here it happened on the first round.

Here haiduk vs Wall7 shouldn’t have happened on round 1.

Here the 4d should have gotten the bye. Until some times ago, the bye was always assigned to the strongest player who hadn’t gotten a bye before.

I think this is enough, but there are a lot of possible more examples. I also noticed this difference. It used to work quite well.

Unfortunately you showed an example of a 19x19 tournament, but with 9x9’s (please check) it’s “Slide” not “random”. Also, there is no Tournament director for 9x9.

Yes … it worked great before!

Who is in “charge” of the 9x9 tournaments?