Am I playing too much on influence?

I played and am playing a few games now on the normal board. And I wanted to ask stronger people than me if my playstyle is too mutch on influnce too improve mutch by playing? Or if I stick consistently to my style am I be able the become a stronger player?.
As to add more information I play Go with ocationial longer pauses and in my last play group in universtiy They said I was around 4k. So maybe 9k is not my real strength for now

Thanks in advance for the asnwer

I see you like 4-5 and 3-5 openings a lot. There is nothing wrong with it, but they usually involved fighting variations if your opponents don’t want you to have influence. And I can see you are not a bad fighter in mid-game (have to deal with fighting quite often I assume).

Generally speaking, handling influence is much harder than securing territory in the corner or on the sides. So if you can handle both and be flexible about your directions without putting your groups in danger, you certainly can become very strong. Studying common joseki and fuseki certainly wouldn’t hurt, especially understanding the reasons behind those variations, and then put them to use in your variations. Reviews with your opponents to understand their reasoning would also help to identify your strength and weakness in your openings.

I had a look at this game whogoesthere vs. Kaiserderpreusen
I’d say that the main question is not whether you play too much influence or not. Generally speaking you often make bad shapes, with many cutting points. Influence is used for attacking, but you can’t attack when your shapes have too many defects.

I have good memories of this game where my 5d opponent went for influence, giving me a lot of territory in the process, but he was leading the whole game (I don’t think I had any real chance, even though I tricked him in the late middle game): koji115 vs. gennan

You may like influence, nothing wrong with that but that’s not really what i see after looking at the same game linked by @jlt . i see more agressivity and what i call myself “boxing style”.
so there is still a way to go for direction of play, and shapes too.

besides it is not a bad idea to stick to a style of play it can help to dismiss partially some kind of opening or strategies to help to learn to build a game which i think is crucial at the level you are. more diversity and culture may be kept for later (approaching the dan levels). 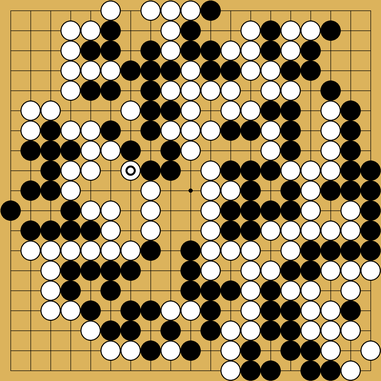 Maybe this game
i was sure until 186 that i had the big group in the middle of strugling to death.
But the analysis shows that i was lossing copmpletly all the time, Was my apoach to agresive despite trying to cut the group from other groups

In my humble, kyu-ish opinion, yes, your opening is too aggressive and way over-concentrated. By move 90, three-quarters of the board is still largely open. I suggest playing more strategically, with less hand-to-hand combat.

i was sure until 186 that i had the big group in the middle of strugling to death.
But the analysis shows that i was lossing copmpletly all the time, Was my apoach to agresive despite trying to cut the group from other groups

Where do you think you had influence? I don’t see any. A single stone at k17 barely counts as influence. In this game you were chasing the middle white group into open areas of the board so of course it won’t die. If you actually had some influence on the top and left side of the board maybe it wouldn’t be a ridiculous overplay to dream of killing it.

Having influence means that many of your stones are facing outward (towards open space), which helps in any fight that might erupt in that open space.

For example, in this position, white has a lot of influence and some territory, while black has a lot of territory and not much influence:
GoKibitz: Move-by-move conversations about go games. 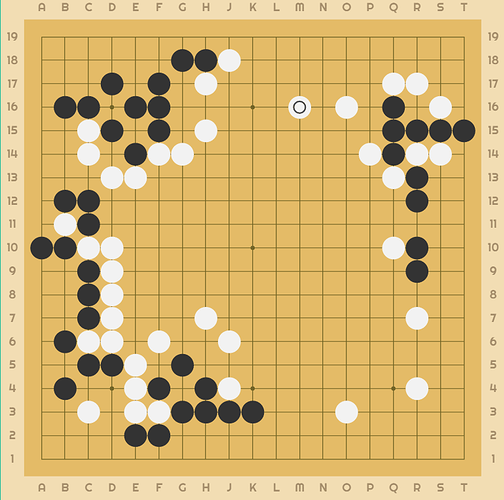 image771×764 46.6 KB
Black played at L11 on the next move and a big fight erupted, where white had a big advantage from all that influence (the AI preferred to invade/reduce slightly less deep with black, at L10).

Here I marked the territories in magenta and the influence in blue: 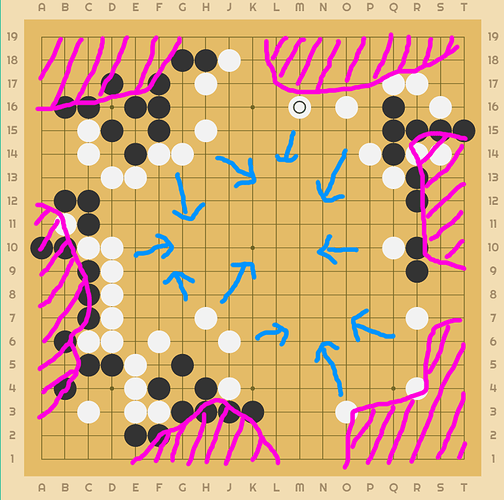 ok so i changed from influence to boxing in this game?
Now i understand the probem

You mean Partie amicale? As was said, it doesn’t look like you were playing for influence in any stage of that game. But perhaps we missed it. At which move in that game did you you feel you had considerable influence?

The typical flow of a game where you play for influence goes something like:

P.S. this is based on you sketching out large areas which, if they all become yours will be enough to win so the opponent needs to reduce/invade. If the area you are threatening to make is not that big, the opponent can not invade/reduce and let you get it and just win anyway. That’s why counting and positional judgement is particularly important in these kinds of games.

What is a influence player?

In the game there are two balances, the balance of territory and the balance of influence.
In a fair game, if you are ahead in one you are late in the other one. A influence player has a predilection to build influence first (and as consequence to have less territory) He likes walls. Later he will create territories at a higher speed by attacking the opponent stones. Note that the walls are not bound to change into boundaries, because to play efficiently you will push your opponent weak groups in the direction of your walls.

A boxer is just someone who likes fighting and many times it is completly out of direction, like in the 2 diagrams i put up.

I toght my moves 7-14 were influnce play because i tried th let him have the corner, and i did not want the stone on n3 to survive

Influence is useful if you make strong shapes “outside”, for instance walls, or ponnukis, etc. Your move 15 wasn’t at all influence oriented, and a few moves later your opponent actually got more influence than you.

This move would have been influence oriented: 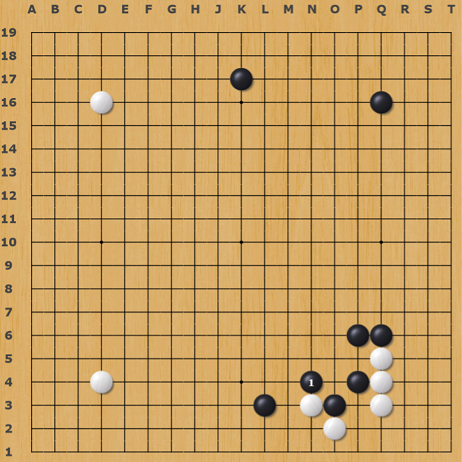 There are lots and very well studied joseki that follow from A or B if you block with a solid connection after a 3-3 invasion. I think playing a diagonal move at move 9 was the beginning of your downfall. 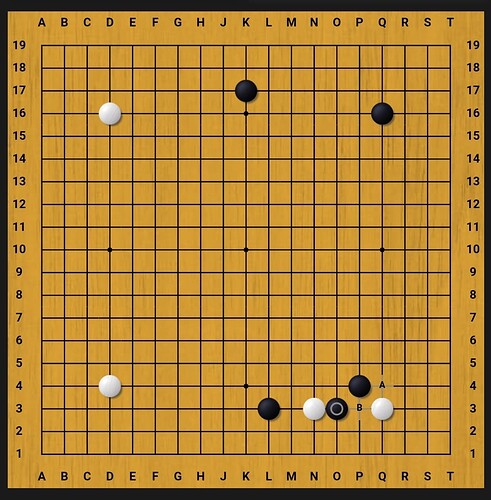 I see. I can agree that black seemed to be building influence here: 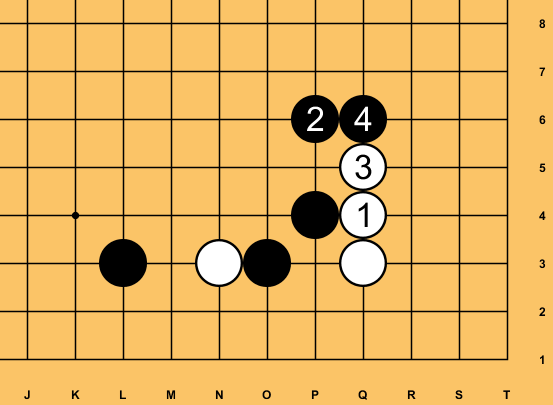 But a few moves later, black allowed white to destroy it again, so it all went down the drain: 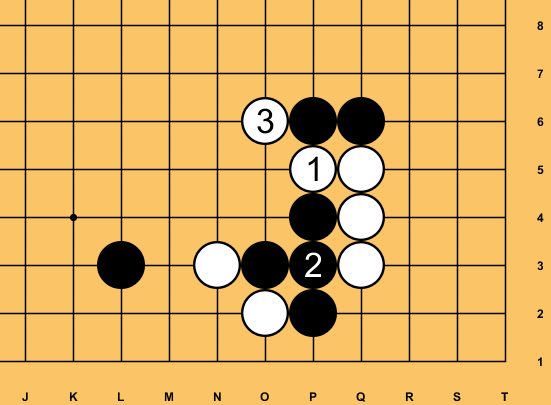 Playing for influence usually involves giving away some territory in exchange for an outward facing wall.
From move 7 to move 14 you gave away territory, but you didn’t end up with an outward facing wall, so it was just a loss without compensation for black. The reason was that black’s play was inconsistent, trying to to persue 2 contradicting goals:

and i did not want the stone on n3 to survive

If black had stayed consistent in going for influence from the 1st diagram, black needed to be prepared to make some additional sacrifice, for example like this: 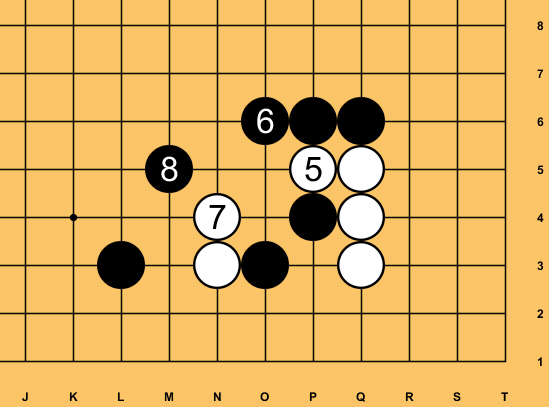 Would black’s sacrifice be too big for that amount of influence? Probably, but at least black’s play would have been consistent.

You are correct that this diagonal move 9 was bad (it’s bad shape that doesn’t disconnect white as o2 hane under connects locally) but this whole position is one line further from the corner than a 4-4 with approach and pincer and take 3-3. Nevertheless a and b are still the best choices to make good shape.

Playing good local shapes or not is generally more important than bigger picture strategic ideas like playing for influence.