As always, no clue what I could have done better. After 10 moves, I could see I was losing. The rest was desperately trying to break things open.

I see Smurph already left you some variations, but since it has been ages since I also got to review anything, I thought I would also leave you some comments. I did a full AI review for you, not because I want to encourage you to study it too much, but so you can see how the game developed and believe me when I say:

You were not losing after move 10, the game was actually more or less equal (or maybe even in your favour until move 50)

Best of luck in your next game 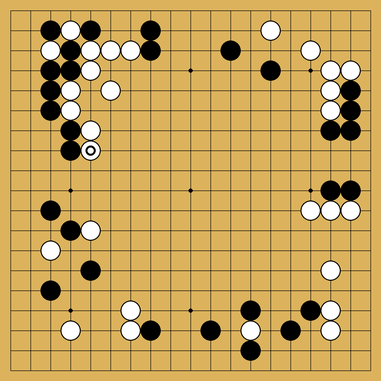 Thank you. I like your observation that I am “too envious of what my opponent has”. That’s why I do these “crazy” moves (C7, N3) and I give up on them inmediately when I see it’s going nowhere. Because that’s the thing (as you point out too): somehow I have to do “weird stuff” if I don’t want to lose. But if the weird stuff fails, well, better to focus on other parts of the board.
Also, you say that a certain point I start to play to “small” or “safe” or something. The thing is that for me, a lot of these moves (e.g. move 64, F8) are still weird moves to get desperately some more space than I have. I don’t see much weirder moves.
About move 50, I can see that with C18 I could save the corner (I missed that during the game) but at this point I figured getting something in the centre was more important.
Why did I think I was losing at move 10? Because black already seemed to have a complete side, and I had just some stones in different places. True, there was a lot of empty space, but wherever I would have put a stone, black would have followed so I was already running behind the facts.