Another one of those (review request) 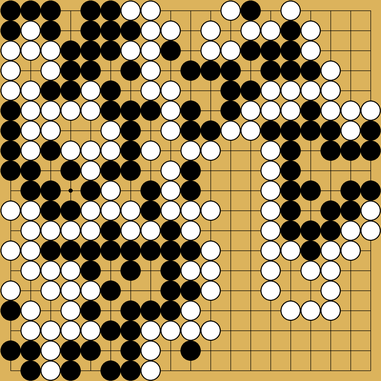 My questions are:
-for move 159, AI suggests J10. Not that my move was any good, but what does J10 accomplish? I followed the variation but I don’t see what’s great about it, why it’s worth 13 points.
-at move 191 it suggests L2 for B. Other than it’s good for W to get it first, I don’t see why it’s good for B at that point. Me insisting at the bottom is not good either, but what does L2 give?

Of course, any pointers are welcome, as always.

J10 is easy, it kills all the black stones of top left. K9 does the same thing, but J10 is simpler. At this point White wins big, I would go with the one I can read easily to secure the win.

In case it is not clear to you, the black group has only one eye. X is a fake eye. Even if it is a real one, it’s white’s turn to take it out: 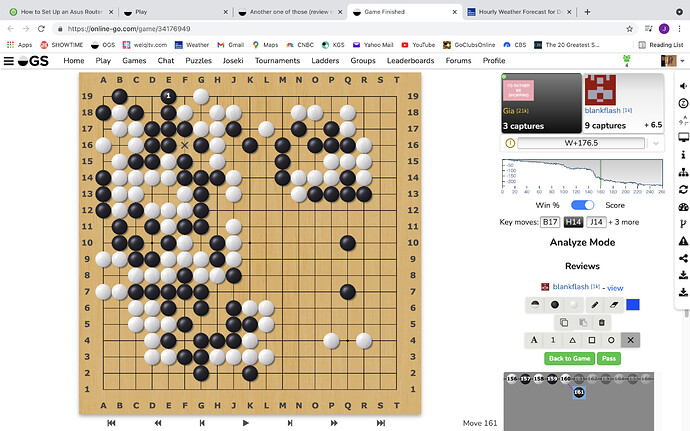 Move 191 suggests probably some moves in the corner to live or use that as a threat to gain some yose, but you would be better off to try out the variants with AI instead of listening to me.

Edit: my bad, you were asking black 159. Easy still, black lost and this is the only way out and has to try. At this point, AI suggests 100% white win, this black move is 0%.

For 159: I don’t think Black at J10 acomplishes anything. Black makes one eye, but isn’t yet alive if after the AI variation White kills at D19. Black is so much behind that the AI is a bit “desperate” and suggests moves that don’t really work.

Quite a rank difference there. You may already know this but I think generally it’s better and easier to review close in strength games where both sides have chances and the game swings back and forth. So these chances can be pointed out, better shapes can be pointed out. On the other hand when a stronger player is steamrolling weaker player it’s harder. Because most of the game stronger player doesn’t put themself into position where weaker player can realistically do anything against them.

It’s not their fault, really, I have ranks off and just accepted the first challenge I found.

If you consider it was against a one Kyu, you did pretty well.

I have added a couple of comments and variations: