Any opinions on this rank estimator?

It analyzed 38 games, but I won’t go back to see which one it missed…

Hm, the second batch threw it off, it seems.

You’re still young, that’s your fault, there’s so much you have to learn.

Do you like fighting?
When you fight it’s all or nothing: you destroy or be destroyed.
Probably some good ol’ classics from Dwyrin could help.

First is territory vs influence.
Territory means points.
Influence means “I’ll stay floating above you and kick your ass eventually”.

Classic vs Novel… well I don’t know but have suspicions that it’s something like Usual vs Weird moves.

Weird moves are ok if you are a skilled player that knows how to deal with everything… like an AI. If you’re not… they’re just weird.

What I mean to say is, I agree that the test seems to be accurate.

I’m around that rank on OGS, give or take 10 stones

I almost snorted my chicken laughing.

I got inspired to try this after seeing @Gia’s post, so here it is. I have been playing mostly unranked on this account (mostly variants such as TMG, large boards, and teaching games), so I had to go back to late last year to get ~40 games. So this is from games from the past 9 months or so; almost a year. However, I’ve been stuck for longer than that, so I don’t think it will be too harmful, and may even be better that way.

All the games are ranked, and I tried to skip any where the OGS AI review said a timeout happened while the game was close. I figured if a timeout happened when one player had a decisive advantage, they probably just accidentally let their time run out trying to find some miracle move and the game is still valuable.

I think the 4k might be a bit low since it’s KGS ranks and I’m about 4k OGS, which should be stronger, but idk.

I couldn’t glean much from the Style scales since I don’t have a sense of what each end of the scale represents, but what I found very interesting was a certain player listed as “Professionals who have similar style as you”: Hane Naoki. I’ve read his book “Creating a Thick and Strong Game” and try to keep the ideas in it in mind when playing. It could just be coincidence, but it still makes me feel like I must have learned something useful from it.

Validly or not, this has validated these results in the opinion of my mental “BS Detector”, and so I will definitely be checking out some games by all 8 of these pros on go4go. Though that does beg the question [sic], is there any significant gain in going over the games of random professionals within some closed interval of similarities to one’s style, as compared to going over the games of random professionals? 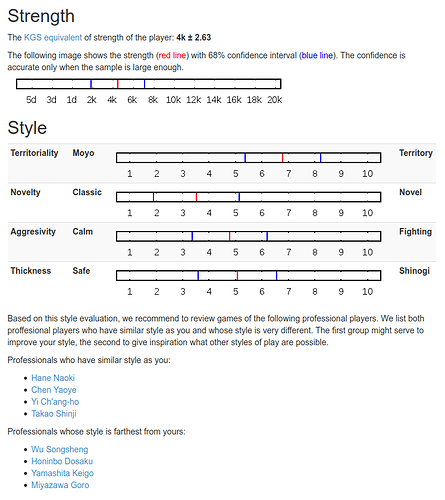 I think a lot of these rank and style estimators have to be taken with a grain (or mound) of salt.

They are amusing to look at, but probably a bit closer to a horoscope than a medical test.

Anyone finds a “what is your Go style, according to your horoscope” test, I’m sold.

Or, something that gives you a horoscope like prediction based on your go games.

If you follow your instincts and dare to take some risks, Sagittarius, you’ll be handsomely rewarded. You have the capability to make a good game great. Do your best not to get distracted in your next game. Keep your eye on the big picture rather than let yourself get bogged down in local fights. You’ll find that when you take care of the big groups, the little ones take care of themselves.

Lightly edited from a free horoscope that I found online.

As Gandhi said, “Be the change you wish to see in this world”

In this thread, I will give people free horoscopes about their go playing style. To receive one, please post: Your zodiac sign (you can make this up, if you don’t want to share your real one) A link to your profile page (even though I will completely ignore your game history and just make something up).

That’s definitely a danger, but just because it’s not perfect, does not necessarily mean it’s not valid. All you need is to predict something with >50% accuracy to a statistically significant degree. Now it could still be a con which relies on confirmation bias to “work” (such as MBTI or Enneagram, as opposed to FFM which actually works as defined above), but we can’t conclude such just because it makes a “mistake”: that will happen 45% of the time if it has 55% predictive accuracy.

How about a thread in which a dan player explains to us the difference between the answers to each question, and why one is stronger than the other? There seems to be a lot of meat for learning there.

So it seems I got most answers right, but I’m not sure which answers I got wrong. So I cannot say for sure why one answer is stronger than the other.

I’m 3d EGF, so either it’s a bit optimistic or I happened to get a bit lucky in the guessing the right answer.

I happened to get a bit lucky in the guessing the right answer.

This always happens in multiple choice.

I got euro 13k from the thing which is apparently 12k ogs, but im a 19k on ogs. Part of it though was def me guessing because I didn’t know the answer to most of them. I also prob woulda put a different unmarked answer for most of them so I guess this might make sense in my case? Idk.

Now that sounds totally fine to me. The OGS rating system that puts me at 7k though. Where can I report the bug?

Maybe I should play more on OGS