Are timeout wins and losses neutral on ranking?

I’ve just had a couple of correspondence games timeout leaving me with a declared “Win”.

But both times my rank remained completely unchanged compared to the 0.1 or 0.2 kyu of a normal win or loss.

So that implies that a cynical player could just time out if they thought they were losing.

If a player times out in multiple correspondence games only the first one is ranked This is to avoid upsetting the ranking system on mass timeouts.

Rankings are no rewards, just estimates of playing strength. (You didn’t imply anything else, just saying this so one can understand the strategy which would make no sense if ranks were a reward system.)

I think this is specific to correspondence timeouts.

And yes you are right, but the flip side is that if someone times out all at once (as they do occasionally), they will become an accidental sandbagger.

Yes, the serial timeout rule applies only to correspondence games. It’s purpose is to cover situations such as a person being hospitalized and unable to play. We do keep an eye out for abuse of the rule.

Thanks for asking, Rupertw. Several past threads about it, here is one for your enjoyment. The issue is clustering of timeouts where a player continues to play his “winning” games, and does not play moves on his games headed for a loss and just lets all those losses timeout all at once. I don’t play players that timeout regularly because of the serial timeout rule, but that is a choice; in a tournament, one cannot select opponents.

If you notice a player that does serial timeouts or excessive timeouts, do report them to the Mods to investigate.

Proposition: Loss by timeout in correspondence games should not affect rank OGS Development

I’m going to claim that, philosophically, adjustment of rating is done in order to achieve an accurate estimate of strength rather than to punish the loser or reward the winner. When a player times out due to not playing turns for a days or weeks … that’s not really the same as losing a live game on time. I think the current practice of adjusting rank for timeout makes the OGS ratings less accurate. Once I entered a few tournaments and my rating ballooned up 3 to 4 stones due to timeouts by m…

Yeah, that happened to me on DGS a while back. I forgot to log in for a few days, timed out of 10 games at once, rank dropped by two stones. Then, since games take so long on DGS, it took most of a year to get back to where I should have been. See if you can spot it in my DGS ratings graph: 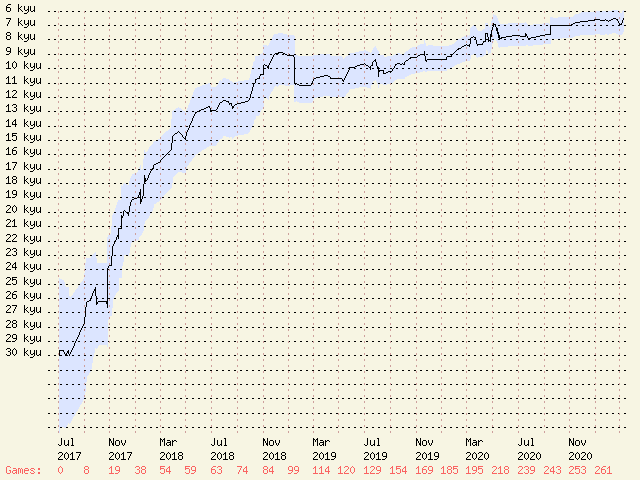 So, very good idea that OGS has this feature.

Did you forget to log in conveniently because you were losing a bunch of games?

People do that here…

People do that here…

An overwhelming minority, I would posit.

Much like an overwhelming minority of people cheat with AI…

How can u see how many time outs a player has had?

I know it says sometimes a person has recently timed out…

As far as I know you have to just look in their game history.

The flag that someone has recently timed out is (or was anyway, maybe it’s fixed) rather glitchy in that it would stick even when it should have been cleared. I have a feeling they were all manually cleared at some point.

lol really U have to gaze out a few pages of games? Seems like a lot of effort.
: ) I have never looked for that now and then I have looked at an opponents games. But not often.

I can remember the last time that happened to me.
But the only correspondence games I play are ladder games, or tournament games, so I guess people there don’t do it on purpose because there are consequences to it, i.e. drop from the ladder, or get disqualified from the tournament.

Well you probably only have to look at the first page of 50. For me if they’ve not timed out in 50 games that’s probably good enough right?

How can u see how many time outs a player has had?

Another option is to use Got Stats?

Wow I never knew of that option. It is not on the home screen I do not think.

It’s third party software care of @Chinitsu. You can add a link to it to your profile page as I have.

No, I had a busy a period at work so all my games had < 1 day on the clock then I had one really busy day when I didn’t get a chance to log in and poof! I do not let games get that low on the clock anymore…

As @jmont points out, there are consequences if you are in ladders, etc. Well, I was in a ladder. After that episode I had to start at the bottom again

And it’s happened again. 4 out of my last 10 wins were Timouts so I’m having some good games, learning stuff and watching my rating going backwards as the losses count but many of the wins do not.

I will comfort myself with the idea that I will get easier and easier players to play against.

It’s just a fact of correspondence play. About half your games will end in timeout. You get used to it if you don’t take it personally.