Morons going out and about and dying from coronavirus alone in their apartments because “this is just a flu and an obvious plot to fund pharma companies?” I’m sorry they’ll die, but not for them.

I don’t have a problem with people bringing themselves into danger because of stupidity.

However, I do have a problem with people bringing others into danger because of stupidity. People who think “this is just a flu” spread the disease to others, who might not think it is a flu. If enough people do stupid things, our health systems will collapse.

“I’m not scared because I’m young and have a good immune system” → yeah, you [expletive], it’s not about you getting sick, it’s about the rest of the population. Stop being arrogant and selfish and just lock yourself inside, like any sane person would.

But I’ve now concluded that they are just selfish attention seekers who, in a very calculated manner, artificially convinced themselves to believe something wrong and also controversial just to feel special.

There is that, but some are trully insane/dumb and/or uneducated and they exist in all countries.

Here in Greece, someone kept arguing under a facebook post that “10.2% of immigrants are murderers”.
He had read that in some blog (of course), so I called him up on that and found the actual numbers from the Greek police annual report.
Here is what happened:
102 murders where indeed attributed to immigrants.
There are - approximately - 1000000 immigrant in Greece
so, they made the division 102/1000000 and got 10.2% those nitwits

Who is more illogical? The people writting the erroneous blogs, or the people lapping them up without any thought and actually curse you when you prove that they have been duped? Now there is a question for the ages.

Here we actually had a doctor make a video about the corona virus where she said EXACTLY what you quoted. A doctor made a video not about the possible patients she might treat, but her own self. Just wow.

This is why I say we keep politics out of it. Some people are just divorced from empathy and reason and it has nothing to do with ideologies.

I like to think that in the end it comes down to team effort and not single individuals.

It’s not only Trump, it is (my observation) a US cultural thing - the team effort. There are many factors contributing.

One of them is that they have comparatively miniscule social support system. This means that they collectively have to be more terrified than any other nation when the economy goes south.

Another is that the US culture genuinely is about the individual, more than any other I have experienced.
“Thinking Americans” - smart wonderful people - are still outraged at the “outrageous imposts on their freedom” that some of the actions needed to control this thing bring.

More than perhaps any other culture, Americans will not be told what to do, and aren’t interested in regulation for the benefit of the many.

Trump in some ways is a reflection & distillation of that…

US statistics knows coordinate of each infected person? (rhetorical question) 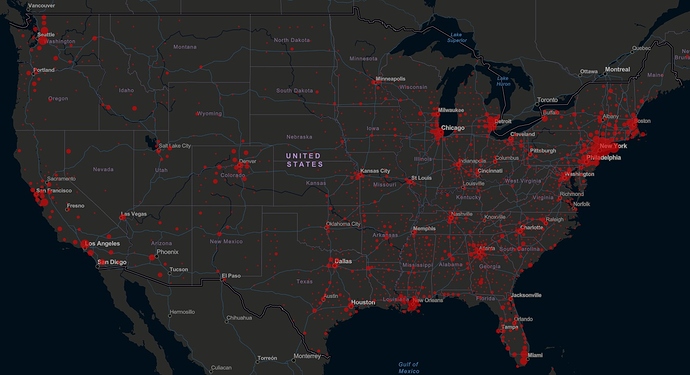 Why not? They report them per county. Even we have such a map.

America has officially gone berserk. Concern about #COVID19 is now partisan: Democrats fear the #pandemic, Republicans think the #coronavirus is no big deal. This is not science. This is "belief" - as in, "I believe it's ok right now to party hearty at a beach kegger." https://t.co/7bYt8tfFqH 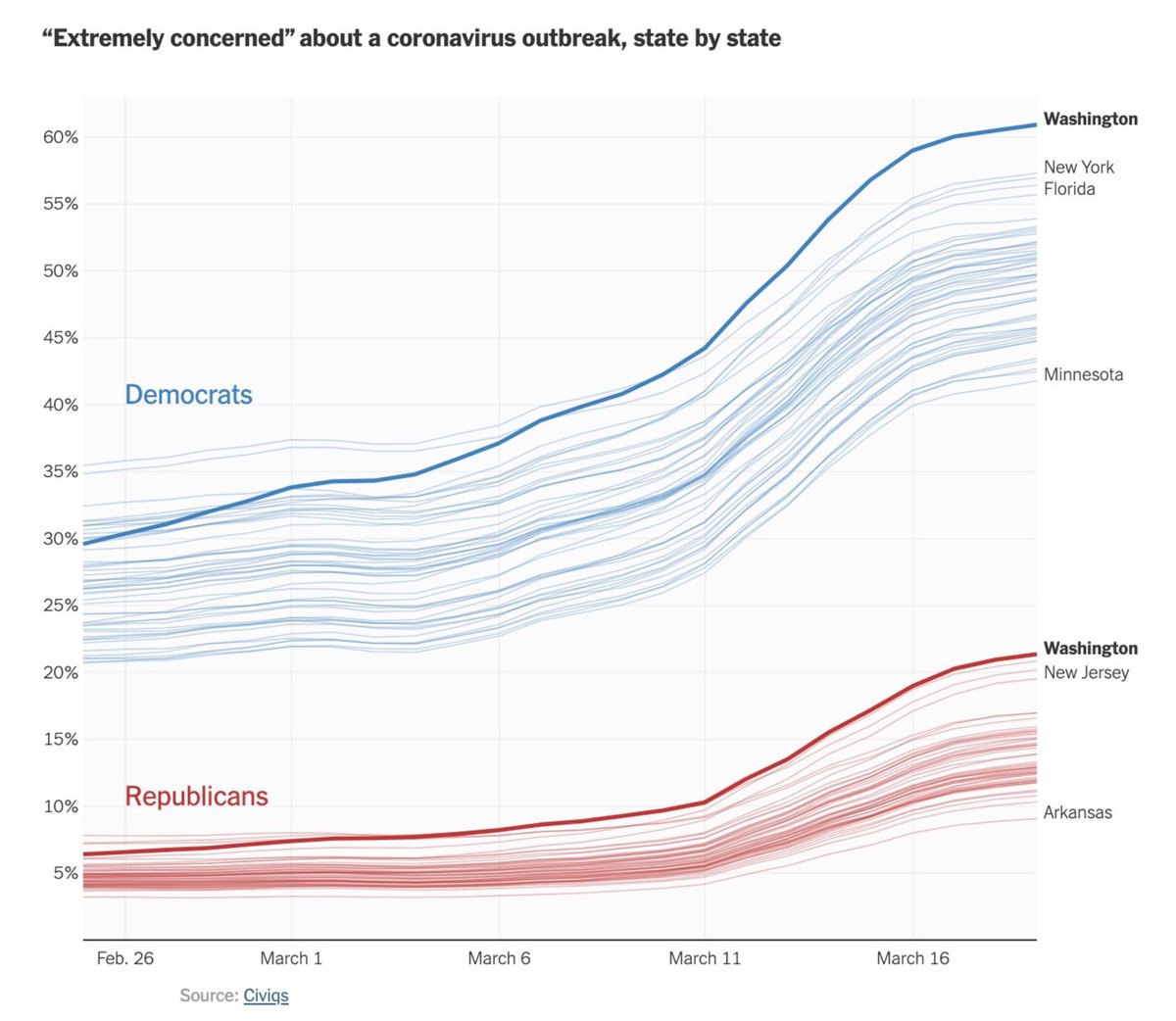 At least concern is rising, so that’s a positive thing?

See, you tried to make them see the light. They know how math works. They have decided that they will support absurdity, it’s their thing. Trying to convince them is like spitting at the rain.

As well as Trump, other world leaders have “allowed the international political infrastructure for managing major global threats to erode”.

America First and its Russian and Chinese analogs may be temporarily profitable in terms of domestic political benefit for sloganeering national leaders. As the coronavirus pandemic is making clear, however, nationalistic ideologies can be dangerous...

Speaking of of incompetent world leaders, it has just been announced that UK Prime Minister Boris Johnson has tested positive for coronavirus. 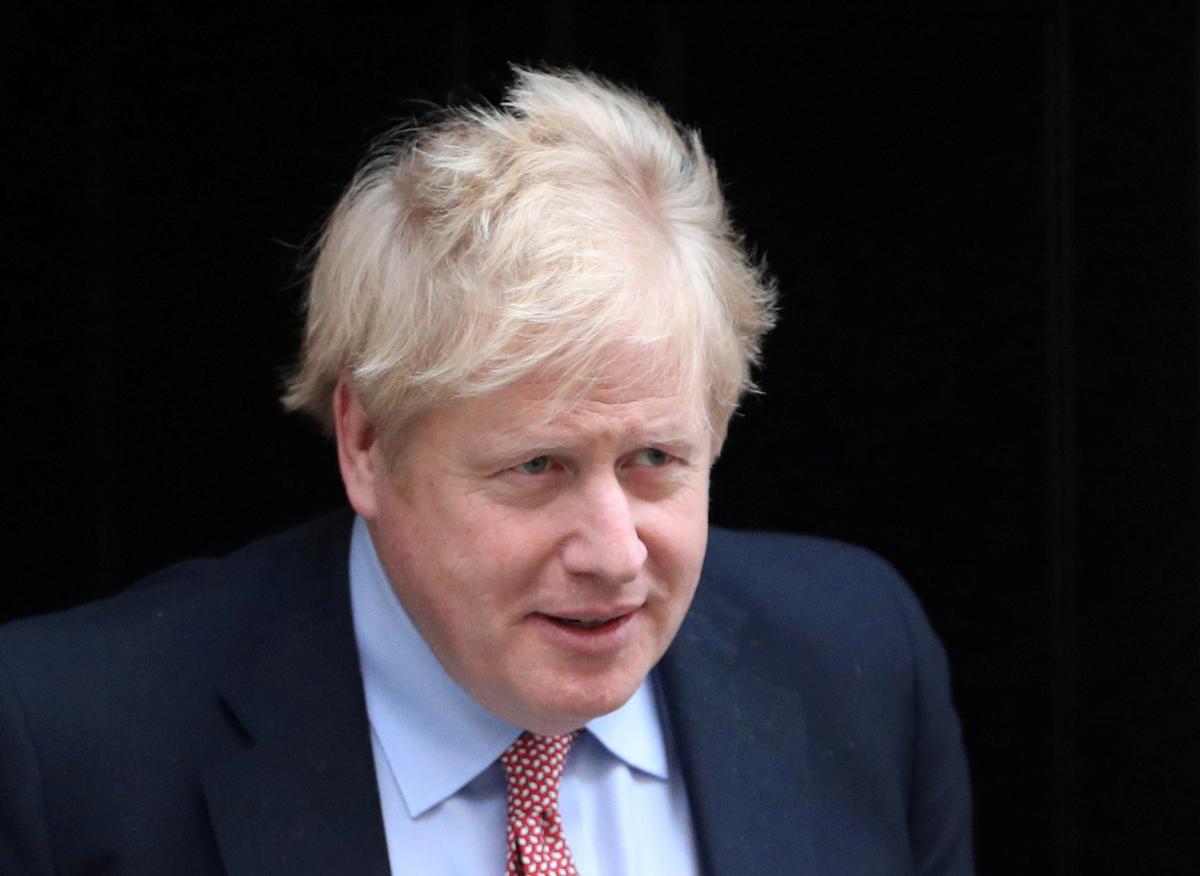 Prime Minister Boris Johnson has tested positive for coronavirus and is self isolating but will still lead the government's response to the outbreak.

One of them is that they have comparatively miniscule social support system. This means that they collectively have to be more terrified than any other nation when the economy goes south.

Another is that the US culture genuinely is about the individual, more than any other I have experienced.

Also, their politicians keep touting how powerful their country is and they can defeat any attempt and all the money going to the military and science etcetcetcetc. BUT, all those people don’t realize that, if this were a bioterrorist attack (I AM NOT SAYING IT IS AND I DO NOT BELIEVE IT IS, sorry for the caps but to be clear), this is their level or preparedness. Basically zero.
They justify practically everything under “to defeat the enemy”, well, the enemy came in the form of a virus, they can’t respond and they couldn’t respond even if it were one of their usual “enemies”.
Talking about buried heads in the sand miles long.

I admit I searched for an article with comments.

US culture genuinely is about the individual, more than any other I have experienced.

Yeah that is a huge factor. Constitutional defense of individual liberty and freedom has been corrupted into selfish “me first” behavior.

Other detrimental factors in the USA include (but are not limited to:
Scientific illiteracy
Many people have no understanding how disease is spread on a large scale

Financial insecurity
Many people cannot afford to miss more than a week or two of work, and many cannot work remotely

Disjointed/not cohesive governmental response
One authoruty figure says one thing, one says another.

Media oversaturation
News media has lost so much credibility because of constant exaggeration and political slant, many people do not trust the information coming from news networks

It is really a perfect storm as I see it

FWIW, I am politically neutral and not registered to vote, so I don’t have a dog in that fight. I iust pay my taxes, obey the laws and show up for jury duty on time, every time.

Oh, this is an off-topic politics thread now. Great…

I’ll post what I came in to post, and then I’ll stay out of here and let you all fight it out / echo-chamber, depending on how it goes.

I see this faux distinction all the time

The decisions about how to treat a global health crisis, how to protect citizens, how to cooperate with other countries, what actions do and do not qualify as essential, this is politics.

It’s sad that so many people think politics is “who did you vote for but mine is better”.

As president, Trump’s actions in handling this crisis must not be put beyond criticism. It is absurd and unproductive to characterize all criticism against him as part of a left-wing agenda. There are plenty of republicans and conservatives that have also criticized his actions during this pandemic.

coronavirus may lead to pneumonia, pneumonia may lead to not enough oxygen saturation in blood. Its possible to buy cheap and simple device that can test it.

Another must-see if you want to understand the numbers better:

Here is an interactive version of the graph in the video.

Two successes and many failures. I admit I didn’t actually watch the video.