Following tables show participation in automatic site wide tournaments (AST) during the day in a week in April 2021.

The numbers in the first column refer to the day & date.
The numbers in the other columns represent the number of participants.
For convenience sake (to avoid having to use a horizontal slide bar) I divided the day in 4 parts:

Interesting. What is your time reference?
Could it be that it’s not a question of interest on weekends but of how many players online? Greenwich Mean Time (GMT) is the mean solar time at the Royal Observatory in Greenwich, London, counted from midnight. At different times in the past, it has been calculated in different ways, including being calculated from noon; as a consequence, it cannot be used to specify a precise time unless a context is given. English speakers often use GMT as a synonym for Coordinated Universal Time (UTC): in modern usage, this is incorrect – GMT is now a time zone, not a time reference. For navigati...

Hope this answered your question.

Bit confused. Do I guess right that the time you use here in your table is GMT?

I think so but am not 100% sure about it (don’t know what the founding fathers and mothers had in mind when setting this up).
Maybe there is a mod who knows what the time reference is?

I’ve never played one before. Guess I’ll join the 9x9 tourney next hour.

I’m no expert but I thought all fine references on OGS were set to your local (machine) time except for the shoot page that shows the server time so you can with it when weekend starts.

There’s an extra detail that might be important, which is the tournament settings. 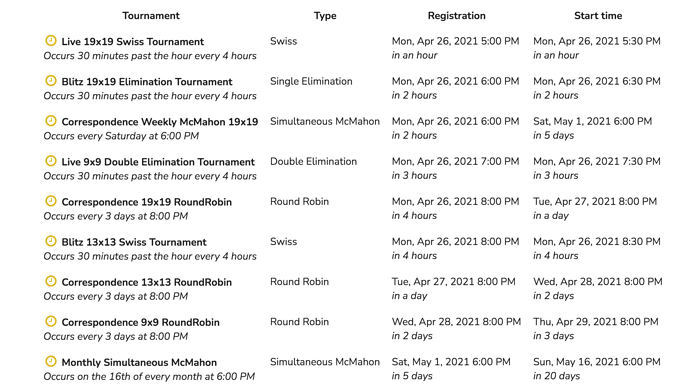 Well for one the live tournament setting is Swiss, so not only will it take longer than the Blitz tournaments and smaller board ones by definition, who even knows how many rounds there will be ? There’s discussion in another thread.

@teapoweredrobot suggested elsewhere that Swiss tournaments on OGS might simply end as soon as a winner had been determined. However, I’ve found an example of a Swiss tournament where that did not happen: There were 6 players in this tournament. After the first round, 3 had won their games, and the other 3 lost their games. After the second round, only one player (who would go on to eventually become the champion) still had a perfect record, since the other two players that won in the first…

Blitz 19x19 would be expected to be more popular, by comparison

9x9 and 13x13 will be shorter too just because of the board size, but again even though there’s a 13x13 Blitz, it’s still Swiss… so while the games will be shorter than 19x19, how many hours of games are you signing up to?

In general how many hours of games are you signing up to with 13x13 Blitz Swiss or 19x19 live Swiss? Is it somewhat inconvenient to have your next round start randomly when the other games are finished? Wouldn’t it be better to just use automatch or a custom challenge where you have more control?

I think not knowing the answers to these questions just put me off the Swiss format altogether for ASTs, also possibly not getting a break between games if I’m the slowest player.