I examined four main variations. We’ll call the corner-owner Black, even though I was White in the game. 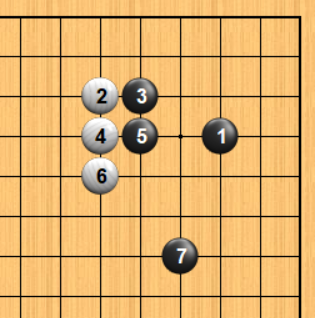 According to Waltheri, the attachment’s only been played a handful of times. The pros seem to like playing this variation, which looks even:

Well, I’m not going to suggest adding this to OGS Joseki because the pros aren’t actually playing it, but I wondered if anyone could explain to me why the attachment might be a suboptimal move.

It’s variation 1. The attachment can be suboptimal precisely because it transposes to a joseki. The long knight’s approach is more of a special-purpose move for when the opponent has other stones nearby, to prevent being pincered too severely or to serve some other special need.

The dictionary should probably mark the long knight’s approach as “good” rather than “ideal.” I just haven’t found a source that says so yet. But you can see it clearly with most modern AI (which recommends tenuki in many cases) and also in its virtual disappearance from professional play.

This really illustrates the the importance of something I read yesterday on Sensei’s Library, about “double-loop thinking”.

When you question the parameters that you’re using to underpin your reasoning [in this case, considering the idea that the two-space approach is not ideal], you activate double-loop thinking and can reach a different conclusion that was previously invisible to you [in this case, that the attachment is also not ideal].

Another example is 3-3 invasions. In this case, the parameter we were thinking under and not questioning is that https://online-go.com/joseki/314 was the best variation of 3-3 invasion that White could achieve. When AlphaGo showed us https://online-go.com/joseki/61, we were able to question this thought parameter and access a wider plane of reasoning.

So white can often do even better than simply transposing to joseki. While the surrounding stones and the overall board position will obviously affect these things, it seems like white will often have ways to do better.