We usually talk about the bad habits a player can pick up from playing a bot, but I was wondering if any of the more seasoned players can identify some “bad” habits they picked up from other people.
For example, a style that fits their favorite pro but wasn’t good for them, a teacher that preferred an opening move and not another, a regular opponent that made them stuck in one specific response.

NOTE: This is not about naming names, please refrain from naming anyone other than famous professionals.
The point of my question is the individuality of each player. Not everyone will assess the same thing as “bad”.

I have some old habits from pre-alphago times, like “don’t invade 3-3 this early when the approaches have still room for base” “don’t kick the approach without something on the side, since now oppo can make ideal extension”

But one really bad habit of mine is getting the “KILL’EM’ ALL” mentality when i’m attacking. Like i know that i should just tenuki after taking my profit, especially if i cant see any efficient way for keeping up the pressure. I know i could allow 1 or 2 stones connect if i can cleanly cut and capture the bigger tail of oppos group. And i know that often its good enough if i force my oppo making 2 eyes from the outside.
But… Time after time again i find myself chasing unnecessary large dragons while hoping i wont blow up in the process. I’ve literally lost countless games for the exactly same reason… “i thought i killed the center group, but there was that cut left in my shape”

getting the “KILL’EM’ ALL” mentality when i’m attacking

Do you think you’ve learned that from playing with certain people (a teacher for example, or a weak opponent), or it’s more what suits your style?

I think my bad habits are all self-made. I have played a lot with an opponent who likes opening with 5-4, or even 5-5 a few times, which has reduced my experience handling normal openings. I have experimented IRL with the Chinese fuseki and San-ren-se, including Takemiya’s “Cosmic Style,” but i am leery of large moyos now in the wake of Alphago. But that is a bot influence.

I don’t think I’ve played any single person enough times to pick up bad habits from them. Which sadly must mean that all of my bad habits are just my own nature.

one really bad habit of mine is getting the “KILL’EM’ ALL” mentality when i’m attacking.

I feel this one in my soul! I will often have to very forcibly tell myself to stop after every move, but once I slip into bloodlust it’s very hard to shake off.

That list is wrong though, there is absolutely nothing wrong with the B2 bomber, it is one of the best shapes you can play

I’ve done the reverse. A few years ago, I used to recommend this awful sequence to DDKs thinking that it was a “fast” way to play as White against handicap because of the better outside shape.

Whilst the outside shape is better, all the helpful aji for White that was at the 3-3 point is destroyed.

As for professionals, there was an article recently in British Go Journal 190 / Winter 2019-2020 by Andrew Simons (@Uberdude) discussing “soba Go” or “80% Go”, which is a style of intentionally restraining from aiming for the most efficient move in all circumstances.

There was an interesting example of [soba Go] on Reddit recently, with someone asking for clarification about this position and explanation in Kageyama’s Lessons in the Fundamentals of Go (taken from one of his games). 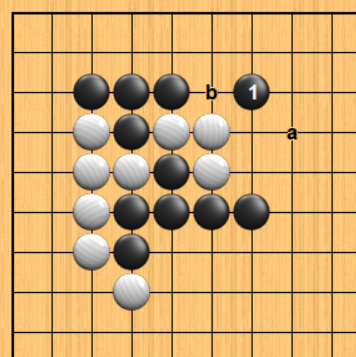 Kageyama writes: “…a stronger amateur would glare at the position and play Black ‘a’, for a larger capture. A professional, however, would find the threat of White ‘b’ after Black ‘a’ disquieting, regardless of whether it works immediately or not. To him Black (1) would be the proper and natural move, the only move to make. (1) or Black ‘a’? Only an amateur would ask himself this question.”

Even before you ask an AI and it shreds Kageyama’s argument, I find rather dubious … many bots I asked strongly prefer Kageyama’s bad ‘a’ over his ‘only move’ (1), and I am strongly inclined to believe them over him

Looking at the diagrams from this site: