I just played this match with another player - I am a bit confused by the IA analysis and would really appreciate if some more advanced players could help me review this game. I am playing white.

During this match I was focusing on particularly on those few objectives: (following the book : “how not to play go” from Yuan Zhou) 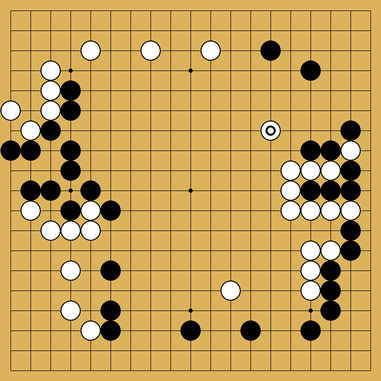 I shared some thoughts, though the caveat is that my skills are basically DDK like you, so it might be the blind leading the blind

If I may chime in. 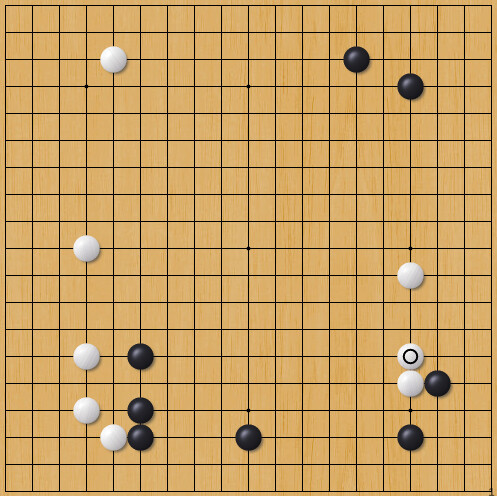 At move 16 you made your first mistake. I have nothing to say about moves 1-15, you played good moves.

At move 16 however, you pulled back with a nobi on the fourth line, instead of a more standard hane on the third line. 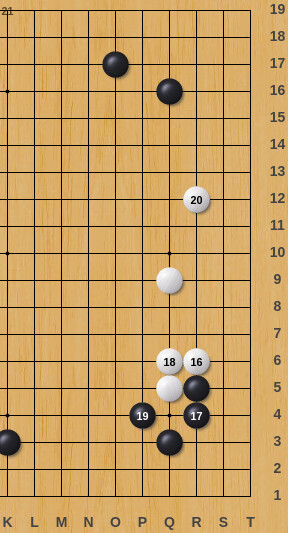 Figure 2 shows a more standard variation. Instead of pulling back on the fourth line, you block on the third line at move 16. Look at the two stones 16 and 18 in this variation: they are two spaces away from your middle-side stone. This makes a nice two-space extension that is a good basis for life for your group. Contrast that with the game, Figure 3, where the two stones 18 and 20 are only one space away from the middle-side stone. Now you are a bit cramped, which will make it harder to make life for your group, and will get you a smaller territory. 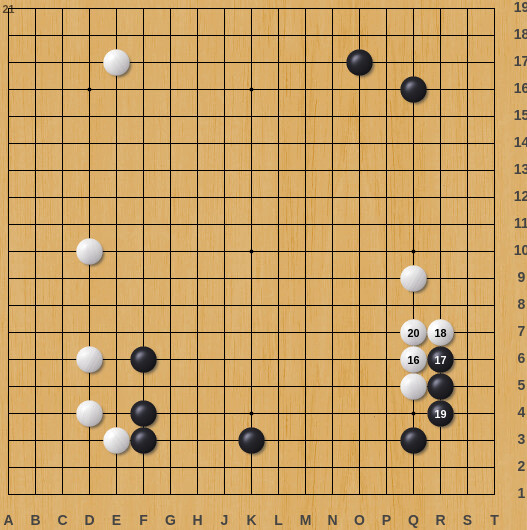 And then in the game, instead of playing a kosumi on the south side like I suggested, Black plays a pincer at move 21. 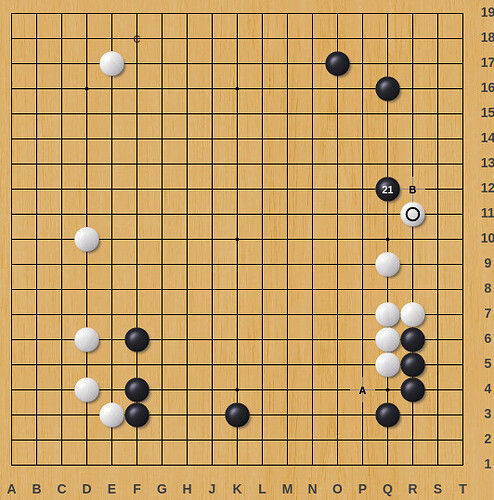 Figure 4: instead of playing the kosumi at A, Black plays the pincer at 21. If Black had played at A like I suggested, then White would play at B, and make a nice big life-base for the White group on the east side. Black is trying to get just a little bit more and to squeeze your group even further, leaving you with less territory and making it harder for you to make life. And you answer at 22, a move sometimes called “the armpit move”, a third-line move diagonally below an opponent’s fourth-line stone. This is generally a bad shape. You’re going to end with a bad shape, and your group is going to be very cramped, and Black will have sente to go back to play the kosumi on the south side: Figure 5. 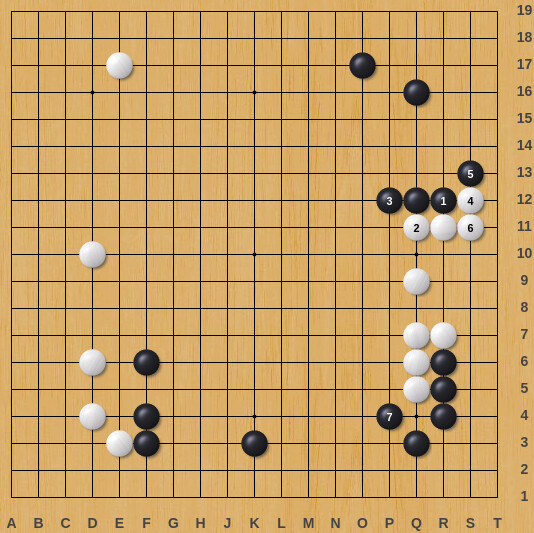 A way for White to resist is the variation of Figure 6: since Black didn’t play the kosumi on the south side, you “punish” Black by playing there yourself. And most importantly, you do not play the cramped armpit move under the black stone. 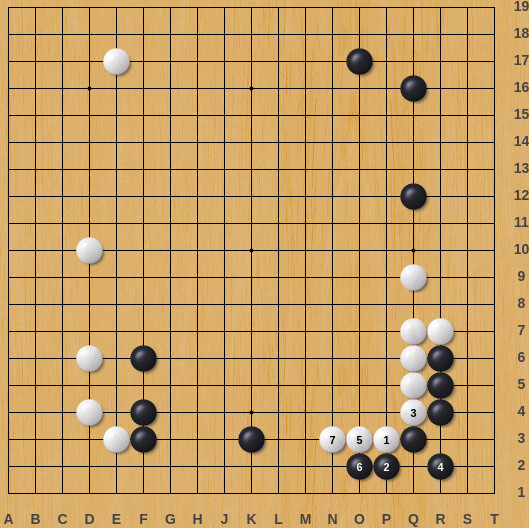 In the game, you were lucky. Black made a big mistake and didn’t choose the variation of Figure 5. Up to move 30, this is all very good for you. But then at move 32 you make a big mistake.

The mistake of move 32 is not of a strategic nature, but of tactical nature. At move 32 you played a hane. Every time you play a hane, you must ask yourself: what happens if my opponent cuts? Very often, the cut is bearable and hane is the best move. But sometimes, the cut is insufferable and hane simply doesn’t work. This is the case here. You should have read that. Black cuts, captures a White stone, saves four Black stones, and closes off a large northeast corner. Instead, if you had read that hane didn’t work, you would have pulled back on the third line, and Black would have had either to abandon the four Black stones, or to painfully crawl on the second line to save them, which would be horrible for Black. 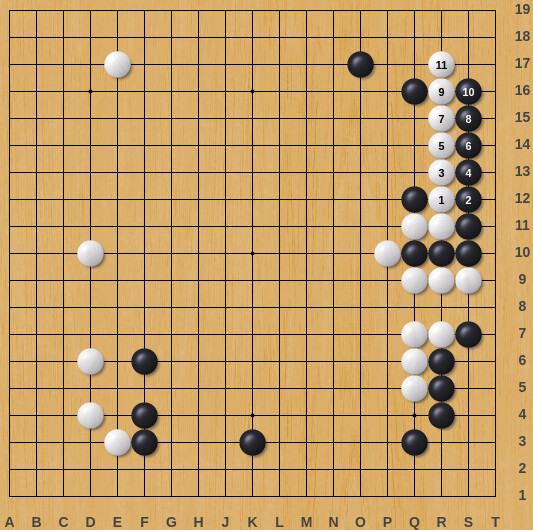 Reasonably, Black would abandon the four stones. Saving them by crawling leads to a horrible result. So, this was a reading mistake by White. Don’t play hane when you can read that hane doesn’t work.

In the game, you took sente at move 38. Good choice. The local sequence on the east side is over. White is not alive yet, but the White group forms a long wall that faces towards the center, so it’s hard to attack for Black. You can leave it. Your move 38 on the north side is very good.

Your next mistake is at move 44. 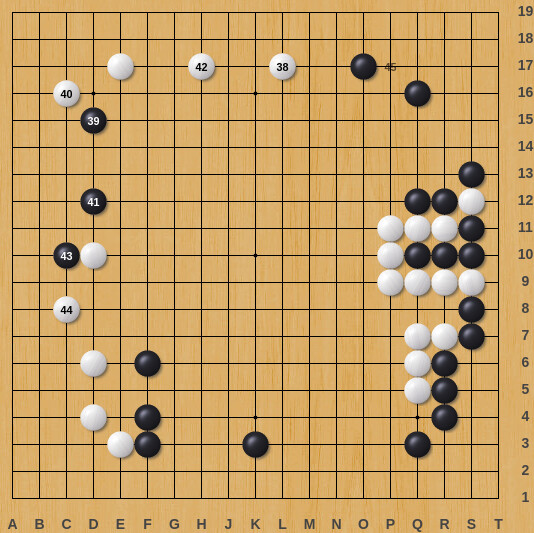 The situation here on the west side is similar to the situation we encountered on the east side, but with Black and White reversed. Now your objective is to block Black’s extensions and make Black feel as cramped as possible. With that in mind, move 44 should be a hane. 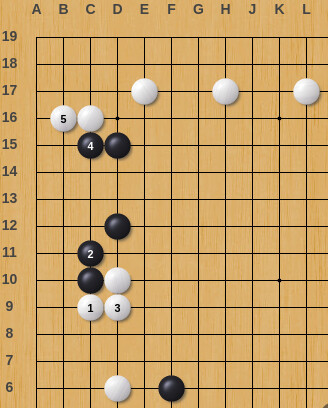 Figure 10: Variation. Keeping Black’s group as small as possible with a hane.

Instead, in the game, you sacrifice one stone for no reason. This sacrifice results in a Black ponnuki. A ponnuki on the fourth line is extremely good for Black. Immediately the Black group is alive and well, and has influence towards the center. There will never be any pressure on the Black group again. Black can relax now. And, because Black no longer has any weak group, it will become much easier for Black to attack the White group on the east side. Do not offer ponnuki to your opponent like that! 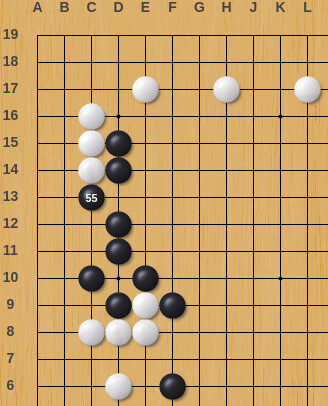 After Black move 55, the Black group is completely alive. This means that the local sequence is over. Time to take the initiative: keep sente, play elsewhere. Play where the gains could be higher. 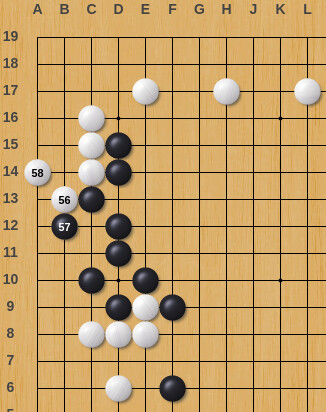 Oops! You played a second-line move. Move 58 is completely gote. The Black group is already alive. The second line is extremely small. Black can completely ignore your move 58, and take sente, and play a big move elsewhere. Do not play gote second line moves, this early in the game!! 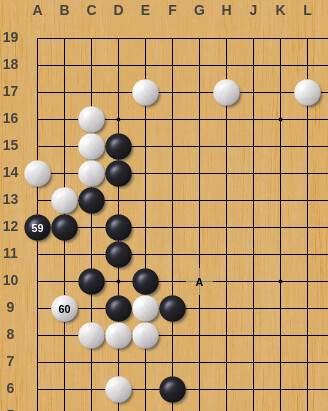 You’re lucky: Black wasted a move by playing move 59 on the first line. This is an extremely small endgame move, completely off-topic at this stage of the game. Now White can take the initiative and play a big move elsewhere. Except… Oops! You did it again. You played move 60 locally, a gote endgame move. You just lost the initiative again! Black is already alive, so move 60 is not sente. The only weakness is Black’s shape is the cut at F10, so Black can for instance answer your small second-line move 60 by playing at A, a nice tiger-mouth which is a huge center move at this point in the game. Or Black could tenuki completely and play the kosumi at P4 to develop the south side.

And then after move 64, Black resigned for no apparent reason. Black is ahead in territory and doesn’t have any weak groups, so the game is rather good for Black at this point, but Black decided to resign anyway. You win!

And now a summary!

With move 38 you successfully applied your first two principles, not necessarily following your opponent, keeping sente, and playing where the gains are high.

With move 16 you somewhat disrespected your third principle. Keeping the groups alive often means trying to build a life base, which means increasing the small territory controlled by the group. Move 16 could have been a hane to get a larger extension than by pulling back.

Move 22 is a bit more subtle. You could have realised that your opponent was omitting their “normal” move, the kosumi at P4, in an attempt to put more pressure on your group. A sharp answer would have been to save your group by exploiting the weakness of the missing P4 move, by pressing down on Black’s south side. But the main reason that move 22 is a mistake is not related to strategic principles, it’s related to shape. R11 is the armpit of Q12. Do not play at your opponent’s armpit. It stinks.

Move 44 was a mistake, for the same reason as move 16. When you’re the one with a weak group, you should try to expand your life base; by symmetry, when your opponent has a weak group, you should try to block their expansion and keep their life base as small as possible. In addition, move 44 was a shape mistake: you offered your opponent a ponnuki on the fourth line. Don’t do that.

And finally, moves 58 and 60 were in blatant violation with your first two principles. Do not play small gote second-line moves in the opening. Second-line moves can be good if they relate to helping your group live or threatening your opponent’s life, but they’re very bad, very small and very gote, when everyone is already alive.

Thanks a lot @ArsenLapin1 for your very detailed explanations. I understand a lot better what went wrong in the game now.

I guess for Move 16, I did not choose the hane because I was afraid that Black would play in Q6 - and I did not know how to play if he did. Why would that be a bad move from Black (I believe you, but I am trying to find why that move would be bad) ?. R4 seemed too greedy (not doing atari if I can do it in 2 different places). Maybe P5 ? 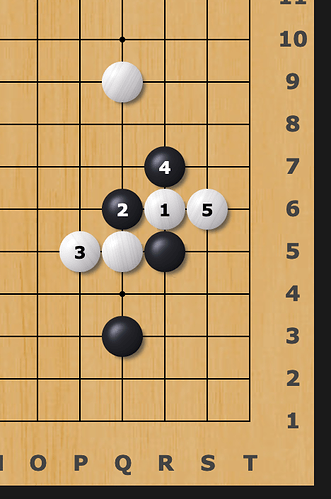 I was not aware of the cramped armpit move nor the fact that letting my adversary got a ponnuki on 4th line was bad, and now that you pointed out to me, I realize I have been doing both often

Anyway, thanks a lot I really appreciated your feedback 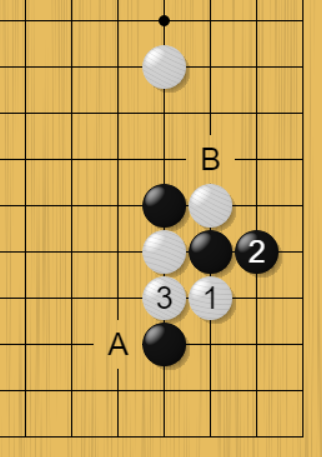 I guess this will happen, finally black should choose play at A or B.

I guess for Move 16, I did not choose the hane because I was afraid that Black would play in Q6 - and I did not know how to play if he did.

It is true that we say, "if you have the choice between two possible atari on a stone, then don’t play either. "
But in this case, one of the atari, R4, is a third line move that will tear through Black’s shape, cutting Black in two halves; whereas the other atari, Q5, is a second line move with no benefit, and playing it would only help Black connect their stones.

When one of the two atari is so much better than the other, we can play it.

I guess this will happen, finally black should choose play at A or B.

It’s always interesting to see how different the levels of understanding are. I can sort of see that this looks promising for white, but the word ‘finally’ made me smile. After black plays either I will still be pretty confused by the situation, nothing final about it for me! And I’m a 4k-ish. The original poster was a 12k.

This may not be final but this bad shape (ripped keima) is a strong indication that something has gone wrong for Black.

not so many as you think! when my teacher tought me this, he say this variation is a type of “battle joseki”. so I just remeber it incipiently, and it is difficult to distinguish memory or read.